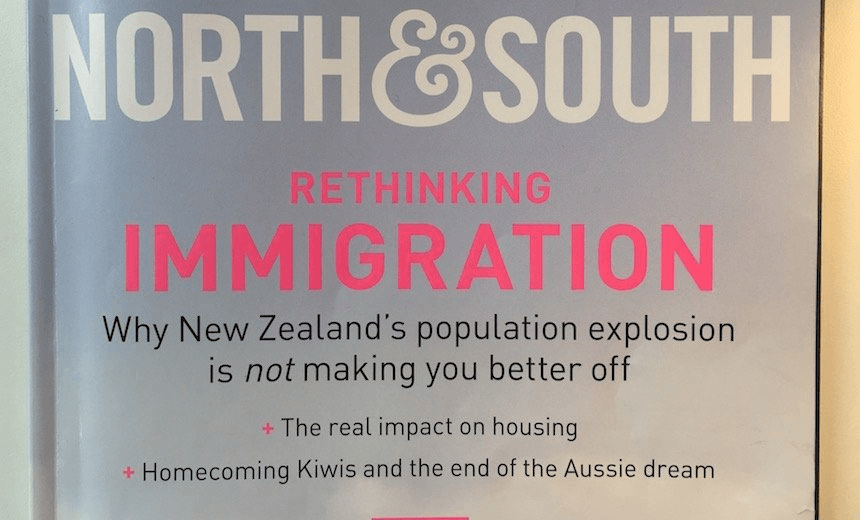 A GOOD ISSUE OF NORTH & SOUTH

A GOOD ISSUE OF NORTH & SOUTH

Every immigration debate in history* has been riddled with racism. Duncan Greive looked at current coverage of the issue – and its impact on housing – and came away pleasantly surprised.

September’s North & South came out a couple of Mondays ago and devoted a large chunk of its feature well to a single issue: immigration. It’s a big deal: unlike its sister publication Metro, North & South isn’t given to regularly dedicating itself to a particular subject, so it’s indicative of a serious depth of feeling within the magazine’s editorial staff. There’s 20 pages, plus the editorial, including essays, a well-reported feature and a lengthy conversation between economist Michael Reddell and the magazine’s editor, Virginia Larson.

In some ways what’s best about the coverage is that unlike last winter, when Labour’s release of its data on house purchasers and Chinese surnames was handled clumsily and with what felt like cynicism, the magazine is at pains to decouple the immigration debate from race. This is accomplished most powerfully through an essay from the magazine’s bedrock, Graham Adams, who reveals his shock at seeing an African immigrant in the early ‘60s.

Riding round in a ’36 Dodge, he spied the man walking down Mt Eden Rd, and yelled “look Grandpa, it’s a n*****”. His grandfather pulled over, and immediately admonished him. It’s an extraordinary anecdote, revealing the casual racism of the child and the kind of socially liberal values this country has managed to display often enough that – despite equally frequent threads of ugly racism – we should always start from a position of hoping we can restrain our worst instincts and have a grown up debate that doesn’t get gross.

Immigration is particularly fraught on this front, with its proximity to race and nationhood and jobs. But that reality has sometimes prevented any mainstream conversation at all on an issue bubbling away like a subterranean spring, fueling a number of our other current don’t-call-them-crises. Housing, infrastructure, transport, wage growth and inequality all lean, to a greater or lesser extent on the fact we’ve had, for a few years now, record numbers*** of migrants flowing into this country, particularly Auckland.

Under normal circumstances the tidal flow of migration means that plays out with something resembling order. But the ceaseless surge we’ve lived with post the GFC has placed such a strain on housing that it’s had the effect of forcing those at the margins from rooms into garages, and from garages into cars. This has made housing the signal issue of our time, because as our survey revealed, even most staunchly National voters have found the spectacle of families bedding down in sedans and station wagons impossible to stomach.

So it goes, in less viscerally affecting style, for our transport private and public, and schooling systems. Put simply, we’ve got cities designed to accommodate a particular number of people, accomodating far more than that number. And, unlike many other political problems – say the funding of a drug or fights at a prison, which can have at least the appearance of resolution with swift action – fixing them takes years at best.

The solution would naturally seem to be easing off the immigration tap, at least until we have our infrastructural house in order – or at least houses for all our current and returning citizens. Unfortunately immigration isn’t simply a reaction to good governance and a buoyant economy. It’s true in part that New Zealand’s ability to present itself as having its economic shit together has helped attract our own citizens home and those of other nations, seeking a better life or better opportunities. But it’s also true that, just as immigration has been one of the underlying causes of a number of the more accessible headline problems listed above, it’s also been a blunt force trauma solution to yet another basket of thorny issues.

A skills shortage in specific areas requires careful planning and the reorganisation of our tertiary institutions. When Steven Joyce attempted to suggest we needed more engineers and less arts graduates a few years back it got real ugly real quick, even though employers big and small are constantly bemoaning a skills shortage. Our quick fix has been to pour in adequately trained resource from other nations.

It’s not a terrible idea, provided it’s confined to areas of real need. But, as Labour’s Iain Lees-Galloway pointed out on Morning Report a couple of weeks back, there has been creep from areas of true skills shortage to those which have a far less clear-cut case for requiring outside help, to the point where just 8% of the 209,000 work visas issued last year were on our skills shortage lists.

It’s those sectors in which immigration starts to function less as a stop-gap solution to a mismatch between training and workforce and more as a depressant on wages. We’re dealing with stagnant wage growth which is starting to look like a new normal. When coupled with a chronic inability to generate any kind of inflation, pouring relatively unskilled workers into an economy with 5% unemployment, far from being the only way around chronic druggy laziness – as our PM charitably claims – could instead be viewed as allowing employers to short-circuit the natural inflationary pressure of constrained supply of able bodies.

This is where the other optically positive effect of immigration comes in. Stagnant wage growth normally fits snugly alongside stagnant economic growth, which then becomes a political problem of its own. Only, a massive influx of migrants and their money means our headline GDP growth figures look pretty good. Pouring consumers into an otherwise flat economy gives the appearance of dynamism, even if economic commentators do perpetually warn deeper into the piece that on a per capita basis our growth is essentially flat.

This isn’t to suggest it was always bad policy. But it’s starting to look pretty freaky out there on a number of fronts, and a familiar immigration cynic looks like he’s getting his election year run early. John Key recently called Winston Peters New Zealand’s Nigel Farage, which seems fair. Like Farage, he seems significantly more troubled by some immigrants than others.

That’s where it gets real ugly real quick. Because the New Zealand these waves of immigrants have created is one of the more diverse nations on earth, and that has made the whole country a more interesting and appealing place to live. It’s critical that the conversation stays about those seeking to come here, rather than being seen as a reflection on those who’ve already come. Up until this point the media – notably North & South – have been at pains to make that distinction. Hopefully our politicians can be as restrained, and we can be perhaps the first country in history to have an immigration debate that didn’t descend into racism within weeks of commencing. Here’s hoping.