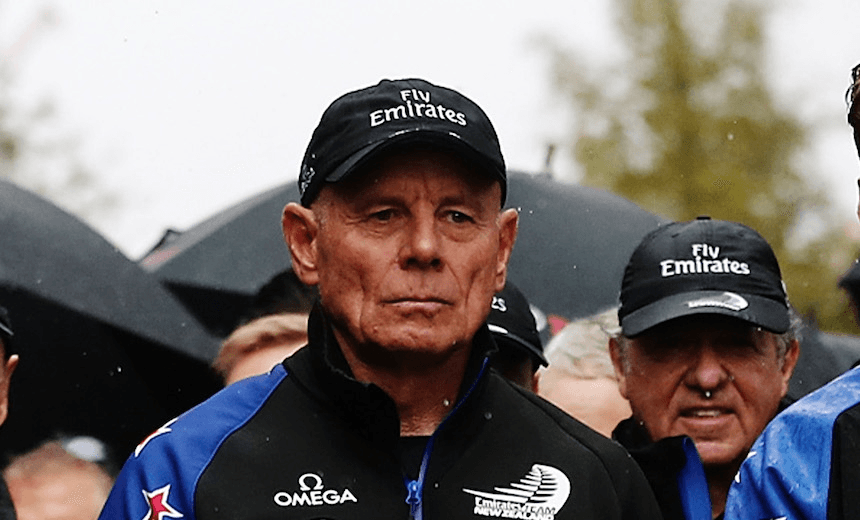 The day Grant Dalton backed down

Team New Zealand manager Grant Dalton didn’t turn up to today’s council meeting to decide where the America’s Cup syndicates should be based. As Simon Wilson reports, he already knew he wasn’t going to get his way.

The writing was on the wall at the start of the meeting. Team New Zealand, insistent at every turn until today, was not going to get its way. How that unfolded was dramatic, impressive on the part of the mayor, the officials, some of the councillors and TNZ itself – and just a little farcical on the part of some of the other councillors, who, astonishingly, did not seem to have the faintest idea what was going on.

The council was debating a very fat report on where to site the syndicates for the America’s Cup. They had three options before them. One was to spread them in a tight-ish array along Halsey Wharf (past the Viaduct Events Centre), the east side of Wynyard Wharf (the Tank Farm) and Hobson Wharf (past the site of the Maritime Museum). This “clustered” option would involve a 73-metre extension into the harbour and it was mayor Phil Goff’s choice.

Another was to locate the syndicates on the west and east of Wynyard Wharf, and further south on the western edge of the Wynyard Quarter. No extension into the harbour. This is known to have government support, and is the cheapest, but it has many significant logistical and weather-related issues, which are important when it comes to launching the boats.

The third option was to extend Halsey Wharf 220 metres into the harbour and site all the syndicates on that wharf. This is what TNZ wanted. This is what TNZ did its best to pressure the council into accepting. Pretending they could take the comp to Tauranga. Threatening to take it to Italy.

But at the start of the meeting, two local boards and the central city business association, Heart of the City, made presentations. Their spokespeople all argued strongly for the clustered option. Perhaps they all thought it was a good idea to come along and say this; perhaps the mayor’s office suggested they do it. Who would know. But it set the tone.

Later on, officials from Panuku Development and the central council made their big presentation. Panuku’s Rod Marler, who has led the preparatory work and the negoiations among the various stakeholders, took a remarkably even-handed role. For councillors who were listening, he said absolutely nothing to minimise the value of the cluster option or to promote the value of the big extension. He was, however, very critical of the western Wynyard option.

Then Sir Stephen Tindall and Kevin Shoebridge from Team New Zealand were invited to speak. Tindall was asked about his role in 2015 as one of the leaders of the campaign to stop Ports of Auckland extending Bledisloe Wharf 190 metres into the harbour. He said he was torn.

Then he said, “Halsey does encroach on the harbour and I think that’s why we’re prepared to be flexible and to look at the new cluster model.”

Shoebridge was then about the impact on superyachts, some of which are owned by syndicate sponsors who want to berth right up close to their syndicate bases. The big Halsey extension allows this the best.

Tindall was asked how Auckland’s wider sailing fraternity feels, given that many of them were loudly opposed to the 2015 Bledisloe extension, and most of them are also big fans of TNZ. Tindall said he thought they were evenly split.

Tindall then said, putting it as clearly as he could: “First, I share the concern of Aucklanders about the harbour. Second, there’s the cost [the big extension is the most expensive option]. Third, it is probably a reality that the extension was going to be a bridge too far for everybody.”

Phil Goff spelled it out. He thanked Tindall for withdrawing TNZ’s support for the big wharf extension. So, there was no point in keeping that option alive. He said they needed to keep the western Wynyard option in, so their hands were not too tied in the ongoing negotiations. Besides, the government seems to like it.

Were the key players surprised at any of this? The mayor said later he “knew since the weekend that TNZ’s position had been evolving”. He thought Panuku was aware of that too.

And yet some councillors continued to argue for keeping the big Halsey Wharf extension alive, and many of them made quite long speeches, on one side or the other. Cr Daniel Newman thought it was a good idea to push the wharf out anyway, regardless of what TNZ was now saying, and wanted it done. Cr Linda Cooper wanted it kept as an option because who knows, maybe something might come of it?

Lola Palmer-Blandford of Kohimarama rides her scooter in Auckland’s Wynyard Quarter. Photo: Getty ImagesIn the end, although the big extension option was dead, seven councillors voted to keep it alive anyway. They included Penny Hulse and Dick Quax, who did not speak at all during the debate, so who knows what they were thinking. Also Alf Filipaina, Christine Fletcher, Greg Sayers, Newman and Cooper.

The west Wynyard option is almost certainly irrelevant. The final decision will be negotiated by Goff with the government and TNZ. By mid-December it will all be agreed, along with the funding mechanisms,and they will apply for the relevant consents early in the new year. It will be a full open process: everyone will be able to have their say.