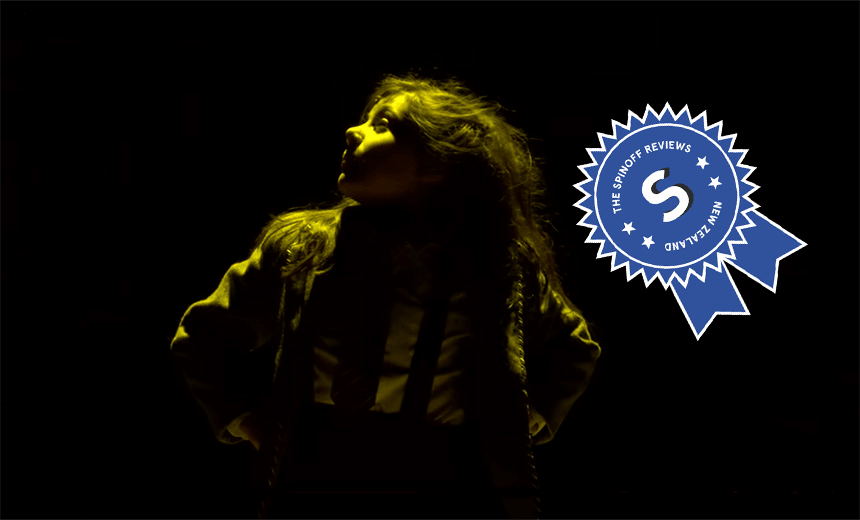 We review the entire country and culture of New Zealand, one thing at a time. Today, utter boor Don Rowe attends the theatre.

Pour me a pinot and call me Simon Wilson, cause I think I like the theatre now!

Last night’s Matilda was both my first play and first musical, ever – a fact most enjoyable to the all the bougie millennials here at The Spinoff. I promised to go in with an open mind and few expectations, and I mostly kept my word.

Though an administrative error meant my powdered wig and opera glasses got stuck in customs I was nevertheless seated beneath the truly Hogwarts-esque roof of the Civic by seven on the dot, snug tight amongst the families and other freeloaders. Come on then art, said I – show me what you’ve got.

I was sold from the opening number. ‘Miracle’, a tasty little satire on the nature of snowflake kids and hover-parents was emblematic of the rest of the show – slick choreography, snappy lines and performances I honestly didn’t think little kids were capable of. From the balcony they looked all of five years old. I’ve been told they’re mostly around ten or something, but the point stands for anyone in primary school. Shit, anyone at all; these kids were sharp.

Matilda: The Musical features music and lyrics by professional Australian goof Tim Minchin and is of course based on the novel by Roald Dahl, who was slipping adult themes into children’s entertainment before Pixar was even a germ of an idea. A blend of the two styles worked like whiskey and coke – palatable for my unrefined tastes, possibly distasteful to the more discerning theatre goers. But it was easy to get down, is the point.

Matilda‘s Agatha Trunchbull certainly leaned comedic, for example, but she (he) still retained enough of the actually quite frightening vibes of the 1996 movie version to put the shits up the kid next to me being sheltered by his mum. To be fair to the young master, Chokey is actually pretty fucked up when you think about – and so is murdering a pregnant woman, which Trunchbull essentially did.

The cast in general were superb – and this Matilda was way, way, cuter than 90s movie Matilda. She was basically a tiny Hermione with better pipes. I’m not sure which of the four rotating Matildas it was, but kudos to you young lady. I’m sure the other Matildas are shivering in their school shoes about the thought of following that.

As time went by however I became somewhat…sour. Why didn’t my parents force me to sing and dance the second I left the womb? Why did I never learn to tap, dad? Where were the jazz ballet classes, mum? The event programme even listed one of the kids as being a photographer outside of acting, which is where I really got mad. I mean, Snapchat filters and warped photobooth pictures don’t make you a photographer mate even if you are ten. Leave some achievement for the rest of us.

But outside of the jealousy of my unreleased theatrical potential, Matilda was a nice reminder there’s a world going on outside of work and home. Just like it’s easy to lean on a mental construct of New Zealand’s beauty rather than actually getting out into the wops, living in Auckland can so easily become a cycle of trains and hangovers without experiencing anything you couldn’t get a taste of in… Palmerston North. So go to a show some time, would ya? I will be. Look for the wig.

Verdict: I welcome my new life as a refined gentleman.