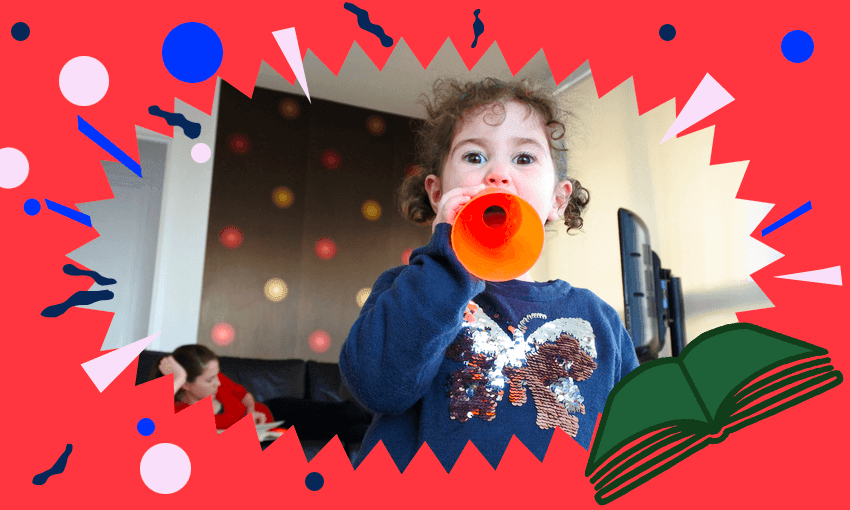 Key point: this very cuboid very cool board book does not in fact produce any noise, aside from the odd indecipherable gurgle from bub, maybe. Could be delight, could be a mangled burp, could be a cutting comment on the graphic design choices, who knows.

The juggernaut that is Sapiens rolls on, now in graphic novel form. Includes a ditty about the beginning of agriculture that doubles as a lament for humankind: “More, more, more, they always wanted moooooore … ”

Blurb: “There are almost 8 billion humans living on Earth, but it’s tricky to picture so many people! So instead, let’s imagine the whole planet is a village where 100 people live – each person representing around 80 million people in the real world.”

4  The Lighthouse Princess by Susan Wardell and Rose Northey (Puffin, $20, 3+)

The picture book that’s renewed our faith in NZ children’s publishing. From our review the other day:

“The Lighthouse Princess is a perfect book. It’s full of cosy nooks and light touches – there are chocolate fish in the sea, friendly penguins that pop inside for a bath – but it’s also hardout feminist, in a matter-of-fact way that sits so much better than all those strident girl power books the shops are flooded with. It begins:

The princess lived in a tower by the sea.

“Children are, in many ways, born philosophers. Without prompting, they ask some of the largest questions: about time, mortality, happiness and the meaning of it all. Yet sadly, too often, this inborn curiosity is not developed and, as they grow up, the questions fall away.”

Sally Sutton rulz and I’ll read my kid anything she writes.

Haven’t seen it but I bet it’s exceptional – ever since Aroha’s Way, Wildling has been absolutely owning the market for picture books that help kids deal with emotions and anxiety.

If you’re going to buy a pop-up book this is a very good option. The highlight is the T-Rex mouth that raaahhs and rises off the page.

Via the New York Journal of Books:

“How do crocodiles clean their teeth? Plovers fly into their mouths and eat the stuff trapped between their choppers.

Why do frogs and tarantulas lay their eggs in the same burrow? So that the frog can eat the ants that feed on tarantula eggs. Tarantula could eat the frog but chooses not to, to save her babies from ants.

There are all kinds of amazing animal pairings like these. The ostrich and the zebra, squirrels and song birds, egrets and water buffalo (the book says buffaloes), burrowing owls and rattlesnakes, hermit crabs and sea snails, etc.

Each pair gets four pages of information. Plus, there is comedy.”

Hear that? Definitely a satisfied purr.

Julia Donaldson, hallowed be her name, has hooked up with a new illustrator (she’s best known for her books with Axel Scheffler) and the result is spectacular: this picture book has gorgeous latticey cut-out pages and foldy bits and a bat’s wing that swoops up and down. Plus, because it’s JD, the words are bang-on.

3  The Lighthouse Princess by Susan Wardell and Rose Northey (Puffin, $20, 3+)

One of those picture books you can buy for adults too. Especially when they’ve just been broken up with. It’s a book of sketches and wisdoms, via Instagram.

If your kid’s a Dav fan they’re already nagging you for this one. If they’re not, they will be.

A picture book but also a horror story, we begin:

Bonjour! I see you are staring at me!

My name is Escargot, and I am such a beautiful French snail that everybody stares at me.

Right now, I am travelling to the salad at the end of this book…

Reminder: Hairy is not Scottish and neither are these books.

All over Netflix, and all over these lists for what feels like forever.