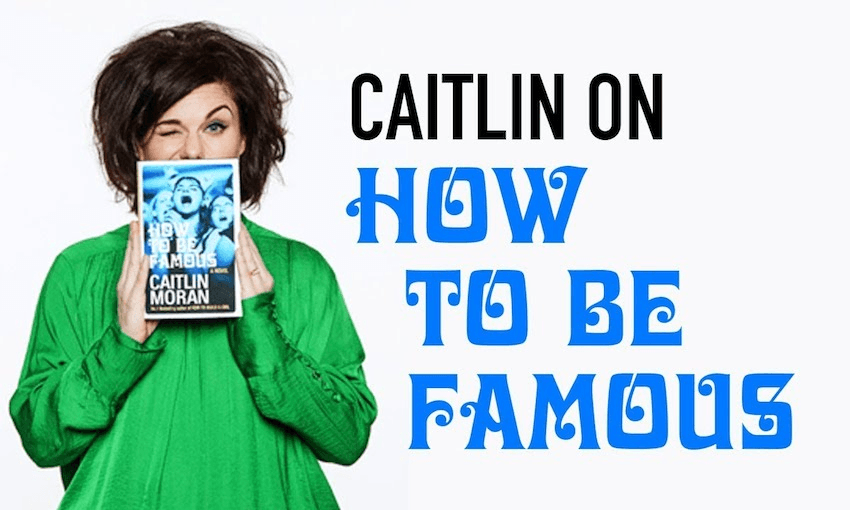 Wyoming Paul is grossed out and engrossed by the new novel by English humourist Caitlin Moran.

It continues on from Moran’s semi-autobiographical first novel, How to Build a Girl. Joanna is a perpetually cheerful 19-year-old who has reinvented herself as music writer Dolly Wilde, and is living in 1994 London during the peak of Britpop. Work meetings are carried out in pubs, drugs are constantly on offer, sexism is blatant (and blatantly ignored) and smoking is still the height of cool, with characters rarely having their mouths free of a cigarette, even when applying lipstick.

Famous people (or “Famouses”, as Dolly calls them) populate her day-to-day life at work, socially, and even when she visits the laudromat. John Kite, the man she loves, has recently become an international rock star, her best friend Zee is opening an indie music label, pill-popping feminist Suzanne is sure she’s destined for superstardom, and the man who tapes their awful sex is a famous comedian.

Dolly wants what she claims all people who move to big cities want: to “hijack popular culture with their weirdness, inject themselves into the circuitry and … make the rest of the world suddenly wish to become as weird as them.”

Injecting weirdness is the thing this book does best. There are countless bizarre metaphors — when thinking about the time she turned down a threesome after projecting an image of sexual openness, Dolly expresses it as “My mouth wrote a sex cheque my vagina eventually declined to cash”. Mean-spirited laughter is described as “the kind of laughter I thought only existed as a sound effect when all the evil goblins laughed in Labyrinth.” A burst rubbish bag leaves “bin-juice” on the floor, in which “there were gangs of maggots thrashing around … like some hellish vermin swimming pool.” Almost every page has something like this — a moment that is delightfully gross or weird.

Moran also fills her novel with ideas and pop references, often through Dolly’s articles on teen girl fandom for magazine The Face. A major theme is the value of teenage girls in the music industry. Dolly/Moran argue that the love of screaming fangirls is what fuels music, what makes it magic. Similarly, the optimistic, wacky narration from teenaged Dolly is what makes the novel’s Britpop scene sparkle for the reader.

If How to be Famous was made into a drinking game, the rules might be ‘Take a shot whenever…’

1) A character says or does something “cheerfully”

2) You suddenly find yourself thinking ‘Wait — doesn’t Dolly have a dog? Where did that dog go? We haven’t heard from it in a long, long time… I hope it’s okay.’

3) Someone takes a bath

4) Dolly refers to her “knickers”, but means her vagina

7) You find a blatant spelling mistake, improper use of punctuation, or missing word in the text (this is the one which will get you the drunkest. Notwithstanding its other excellent qualities, How to be Famous must be the worst-copy edited book I’ve ever seen, so much so that I thought I must be reading an uncorrected proof version — I wasn’t)

How to be Famous is set to be a feel-good romantic comedy for the #MeToo era. (The oddity being, perhaps, that the book is set in 1994-95). This is light, digestible feminism, going into the grey areas of sex tapes, consent, the ‘normality’ of unpleasant sexual encounters, and industry sexism without ever losing its buoyancy and quirky sense of fun. When Dolly says that her sex tape scandal has almost broken her, it makes sense — the situation she is in is horrible — but you don’t ever really have to feel her pain while reading the book, and you always know she’s going to be cheerful and a-okay again by the end.

There is a certain obviousness and predictability to the novel — at one point Dolly has an important self-realisation after looking at a cursed diamond called Hope — that slides toward cheesiness. The book also has a fairytale quality, as Dolly, a self-described “fat girl” from a working class background, is swept away by a compassionate millionaire rockstar who doesn’t bat a judgmental eyelid at her sex tape misfortunes.

But that is the beauty of How to be Famous: it’s classic comfort reading, with enough candid sexuality and wackiness to be fresh. At one point, Dolly thinks of her friend Zee as comforting like a baked potato. Well, that’s exactly what this book is, too. A baked potato and a long, hot bath in which you look down at your breasts and ask them how their day is going.

How to be Famous by Caitlin Moran (Ebury Press, $37) is available at Unity Books.