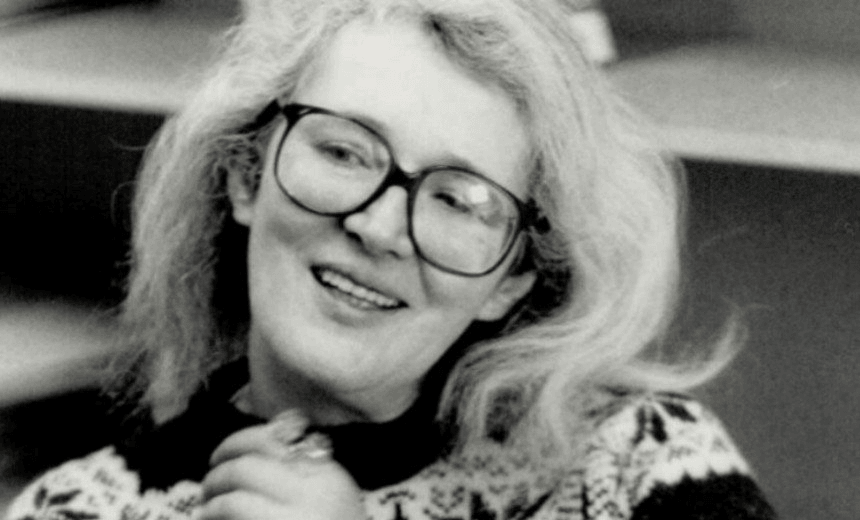 Book of the Week: Marion McLeod on the amazing Angela Carter

“I need to be extraordinary,” said English writer Angela Carter, and her biography attests that she got her wish. Marion McLeod reviews the life story of a woman who described her anorexia as “attempted suicide by narcissism”.

AS Byatt recalls first meeting Angela Carter in 1969. “A very disagreeable woman stomped up to me, and said, ‘My name’s Angela Carter. I recognised you and I wanted to stop and tell you that the sort of thing you’re doing is no good at all. There’s nothing in it – that’s not where literature is going.’ And off she stomped.”

Carter had just published The Magic Toyshop and her goal was to free the English novel from buttoned-up social realism. And in her gloriously exuberant fantasies – The Magic Toyshop, Nights at the Circus and Wise Children – she certainly succeeded.

It’s been a very long wait for her authorised biography but The Invention of Angela Carter is definitely worth the wait. Her biographer, Edmund Gordon, was born in 1982, which means he was nine when Carter died. Still, she always did fancy younger men.

Of course there were complaints at the appointment. Shock, horror! The wrong generation and – much worse – a man! But it was a woman – Susannah Clapp – who chose Edmund Gordon. She was one of the founders of the London Review of Books, which published many of Carter’s brilliant essays. Edmund Gordon publishes there now. More importantly, Clapp was Carter’s close friend. When Carter knew she was dying, she asked her to be her literary executor: “Just do whatever you can to make money for my boys.” Her boys were husband Mark Pearce, 18 years her junior, and their son Alexander, then eight. She always referred to them as “my boys”.

Whatever else she’s done for Angela’s boys, Clapp did well to appoint Edmund Gordon as her friend’s biographer. He’s done a magnificent job – sifting through paper mountains in the British Library, interviewing writers, friends and family in England, Japan, America, Australia before weaving a rich, well-paced narrative which tracks his subject’s self-inventions and reinventions, and drawing connections between life and work with a light and elegant touch. He’s a man on top of his material.

It’s good material. Dickensian really. The young Angela Stalker (the Carter came from her first husband) grew up under the thrall of her maternal grandmother. “She reared me as a tough, arrogant and pragmatic Yorkshire child and my mother was powerless to prevent it.”

It can’t have been easy for the mother, sandwiched between the “primitive” (Carter’s word) grandmother and her granddaughter. Still, I‘m afraid we do have to blame the mother. In Gothic or fairytale fashion – shades of Roald Dahl – she retaliated by fattening up little Angela, feeding her on chocolates and other goodies, so that by the time she was eight, she had to wear adult clothes. At school she was known as Fatty or Tubs. She stammered. Her mother always went with her to the lavatory, even when she was eleven. There’s a lot more, much of it bizarre and all of it sad. Friendless, Angela read and read and read: she claimed to know Great Expectations by heart.

Rebellion followed, inevitably. Extreme anorexia: she lost about 38kg in six months. “Attempted suicide by narcissism,” she would put it later.

Fortunately her father found her a job on the Croydon Advertiser. Former colleagues recall green lipstick and a diet of yoghurt. Without her father’s influence, she might well have been sacked: by her own admission she displayed a “demonic inaccuracy” in the newsroom. Instead she was made a feature writer and lo, the ugly duckling reinvented herself and a personal voice began to emerge. She always had a soft spot for journalists and journalism. Many years later, when Angela Carter, famous novelist, went into hospital to give birth, she wrote “Journalist” in the occupation box .

She met Paul Carter, her first husband, through their interest in music. He was a 27-year-old industrial chemist in a shabby duffel coat. “I finally bumped into somebody who would have sexual intercourse with me,” is how Angela Carter put it. He was dull and depressed. Or that’s what she said in retrospect. Those who knew them at the time saw it differently – they describe a young couple very much in love.

Angela was 19 when they married. Her mother was appalled. But Angela enthusiastically set about reinventing herself as a suburban housewife. The couple moved to Bristol and when she couldn’t find work, she started keeping a diary and kept it for 30 years. She railed against housework. She recorded phantom pregnancies. Then she tried poems and prose fiction. She wrote longhand, with an old-fashioned pen: “the continual pauses to dip in the ink afford a breathing space, in which to consider & brood & plan. . . “ During this period, she worked on a novel called The Star Gazers, a Gothic murder mystery informed by astrology. She should have persisted – she might have won the Booker.

Instead she left her husband and went to Japan for two years. “I need to be extraordinary,” she had written in her diary. In Tokyo, she was just that, with her red hair, fair skin and wide cheekbones. She worked as a hostess and had great sex. There were two serious affairs – the first with a Japanese man, the second with a Korean. She had an unerring knack for finding young men who did the cooking and housework while she wrote about female sexuality.

The next reinvention saw her return to London in 1972. We are halfway through the biography when The Infernal Desire Machines of Dr Hoffman is published to truly rapturous acclaim. She was compared to Nabokov, she was deemed “far and away the most gifted of our younger novelists.” Even Auberon Waugh raved: “I can only testify that I read it enthralled, fascinated and bewitched.”

And now the narrative loses steam a little. The struggle is over, the mountain climbed, fame achieved. Angela Carter is a respected – though never buttoned-up – English writer. Gordon is interesting on the politics of publishing in the 70s and 80s, and equally on Carter’s friendships with other writers. (Fleur Adcock was kind: Carter lived in her East Finchley house between affairs.) He tracks overseas travels and stints of teaching at home and abroad, leavening detailed accounts with plenty of amusing anecdotes. And Carter’s sexual and domestic lives are still unsettled.

Both are resolved in the autumn of 1974. Carter was living in Bath. Mark Pearce, a 19-year-old construction worker was employed on the house opposite. But he kept being distracted by the red-haired woman sitting at her desk across the road. One day the red-haired woman came rushing across the street crying for help. One of her taps had burst and there was water everywhere. . “He came in,” Angela would tell her friends. “And never left.”

They married in 1977. Their son Alexander was born in 1983. Carter was 43, Mark 28. The chronic anorexia which had plagued Angela for years vanished.

Carter and her boys came to New Zealand twice. In 1987 Carter was commissioned to write a screenplay based on the Parker-Hulme murders. Mother/daughter conflict would not have been alien. She spent hours in the archives in Christchurch, poring over court transcripts. The commission was completed and in time a second draft came to South Pacific Pictures. But the project was eventually abandoned: the world must be full of yellowing Parker-Hulme scripts.

Their second visit to New Zealand was longer. Angela was a guest at Writers’ and Readers’ Week in Wellington, 1990. She cut a striking figure, with her long grey hair streaming behind her – unusual, then, for a woman hitting 50. She was working on Wise Children. Slowly. But she was very happy to be working slowly and spending lots of time with her boys. She had a great laugh.

After the festival, they travelled all over: “I’ve never been in a country – except maybe France – with such a variety of landscape, so various, mostly all beautiful,“ she wrote. She had a birthday party when she returned to London. Gordon says that in all the photos she is beaming.

The chest pains started in September and the cough soon after. The lung cancer diagnosis came in March 1991 and she died, aged 51, on February 16, 1992.

Edmund Gordon concludes his biography modestly: “It’s taken twenty-five years for this first full account of Angela Carter’s life to appear, but we won’t be able to start seeing her in the round until a second one gets written, approaching her from a completely different perspective. She’s much too big for any single book to contain.”

Maybe. But his book makes for a mighty fine start.

The Invention of Angela Carter (Chatto & Windus, $40) by Edmund Gordon