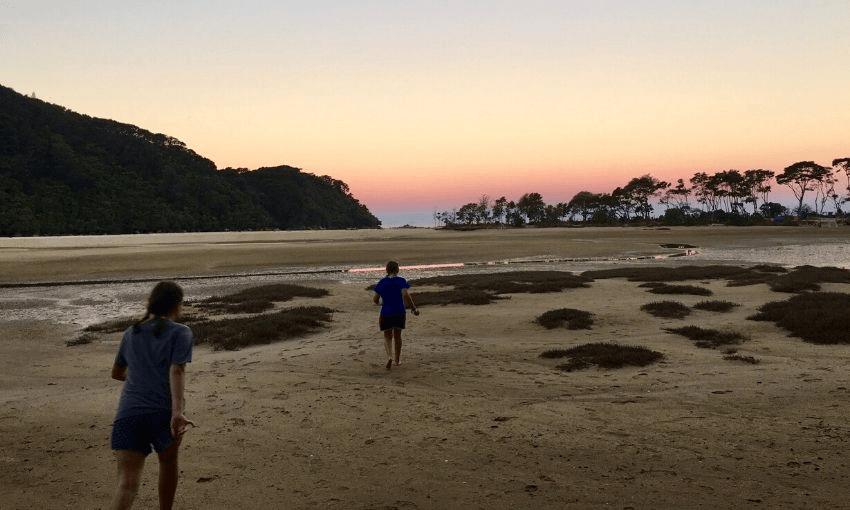 Dan Kois writes that New Zealand has “the effect of pummelling visitors into a kind of catatonia with the relentless attack of its vertiginous beauty.” Image: Alia Smith

Review: Emily Writes laughs and weeps her way through How To Be A Family

Dan Kois writes that New Zealand has “the effect of pummelling visitors into a kind of catatonia with the relentless attack of its vertiginous beauty.” Image: Alia Smith

‘Kids’ board games are bad. Pretending to be pirates or whatever is bad. Crafts are bad.’ Emily Writes finds a kindred spirit in the parenting memoir of Slate editor Dan Kois.

I knew I wanted to read Dan Kois’ book about family life before it had even been written. I’d met him in Wellington. He’d come from Arlington, Virginia to experience New Zealand life. After his New Zealand foray, where his kids would attend school in Island Bay, he’d head to the Netherlands, then to Costa Rica and finally to Kansas.

I was fascinated by what he’d find. Would he finally be able to let us all in on the secret of how to raise our kids right? I loathe advice books but that doesn’t mean I didn’t read The Happiest Kids In The World: How Dutch Parents Help Their Kids (and Themselves) by Doing Less the second it came out.

Because Kois, editor at Slate, writer and podcaster, was going to the Netherlands and parenting there for three months I was desperate to know how in the shit you put that seemingly impossible book into practice.

It has taken me a few weeks to read How to be a Family despite finding it incredibly engaging, simply because of kids. It has meant I’ve carried it around with me wherever I’ve been, hoping for a few minutes to return to it. Because of this I’ve talked to a lot of people about the book and I want to address the very first thing they say about the concept.

White. Privilege. Kois addresses this quite early on in the book and it’s talked about a lot in the final chapters as he returns to a country that refers to him as a “coastal Elite”. His wife is a First Amendment lawyer and he’s an editor who can take his work on the road – they’re both white. A privileged position no doubt. But Kois doesn’t shy away from addressing this. He is clear that his interactions with the other families he meets are not showing every slice of parenting in any one country.

There are layers to what we see in other backyards that can’t possibly be written off in the way they so often are these days. It would be a shame to write off the beautiful and profound lessons of How To Be A Family simply because the endeavour of travelling the world and experiencing life in another family’s shoes is a journey only those with privilege can take. Especially when that privilege is acknowledged and discussed readily and openly.

How to be a Family is a delight. It really is. It has been a long time since a book made me laugh out loud and then weep just pages apart. The way Kois incorporates his children into the storytelling is so beautifully done. I found myself adoring his fierce oldest daughter Lyra and his gentle youngest daughter Harper. I loved the way Kois gave them the freedom to share their views on what he’d written – was it fair? True?

I found Lyra’s reluctance to do anything extremely relatable. “I’m a proud advocate of doing as little as possible as often as possible,” she says. Her views on swimming speak to my very soul. “Swimming [in Costa Rica] was fun on occasion but I still stick by my belief that the cleanup after swimming outweighs the fun and makes swimming itself a pain.”

Their insights were so engaging I found myself wanting to rush ahead to read them.

Reading Kois and his family talking about New Zealand is a real trip. Hearing a visitor talk about the impact ACC has on our kids’ freedoms, and openly talking about the drinking culture so ingrained in life here, was fascinating. He even mentions how many people here are named Steve, which had me cackling so loudly on a plane that I alarmed the person next to me. Here’s his take on our rubbish treats: “ … pineapple lumps, a local delicacy that tastes like stale starbursts coated in bad chocolate.”

It’s fascinating the way that non-New Zealanders talk about our scenery. When describing featureless Kansas, he says New Zealand has “the effect of pummelling visitors into a kind of catatonia with the relentless attack of its vertiginous beauty. New Zealand is so beautiful that I found it difficult to see myself as a part of its majesty.”

I found myself seeing my country in a new light. I even thought about taking a hike. Until I read the hilarious and painfully true accounts of the Kois-Smith whānau walks. So many parents will relate to Kois wishing his kids would enjoy the beauty around them.

“Jesus. Could not even unmatched natural splendour keep her from wanting to fuck around on the internet?” or “As I walked, I’d notice the trail become more and more peaceful, but then I’d realize that that was because I’d walked far ahead of my complaining kids”.

The unfiltered and honest sharing makes How To be A Family a rare book in the parenting space. Kois in the Nethlerlands reflects on the Dutch parenting trope of negotiating with your children AKA using the “Poldermodel”. As one Dutch mum explained, it means “everything is negotiable”.

Kois voices what so many of us think when we come across that concept – “It sounded, frankly, like a nightmare. I don’t want to debate every single step of bedtime. I want my kids to go to bed!”

Having also attempted to polder the shit out of my kids who would prefer 15 hours of screen time to even one half-hour dog walk, I so related to the gap between how Kois wanted to parent, and who he actually is as a parent.

“My mood darkened further as I thought about what this distaste for incorporating my children’s desires into my parental decisions said about me. It turns out I’m not really a chill, nurturing cool dad! It turns out that I don’t have any interest in fostering independent thinking and a scepticism of authority. At least when the authority is me.”

It’s a commitment to honesty that gives the book heart and makes it incredibly funny and moving.

Kois surely speaks for every parent when he talks about the monotony and wonder of being with our children from page to page. “One problem with spending time with your children, Alia and I have discovered in this year of spending time with your children, is that a lot of the stuff you can do with children is just awful. Kids’ board games are bad. Pretending to be pirates or whatever is bad. Crafts are bad.” It’s like he’s inside my brain.

Then he talks about his desire to simply look at his children. “Back when they were babies, we could look at them all the time. There were years of my life when I felt I did nothing but look at my children … But now they disappear into screens and schools, behind closed doors, or out in the world.”

Every chapter gives words to the feeling of watching your children grow and desperately playing catch-up, wanting the time to speed up and slow down. Hoping you’re being a family right. Hoping you’re doing the best you can. The desire to find a place that is perfect for us, whether it’s an actual place or something more metaphorical and figurative is a desire many parents grapple with. Whether you’ve lived in one place your whole life or travelled forever, or returned to or fled the place of your birth – the idea that we’re searching for a place to call home is universal.

The final destination for the Kois-Smith whānau is Hays, America. I will admit I thought why the fuck would he go there? A place where more than 70% of people voted Trump sounds like a shit place to live.

But it’s there, among the red bricks and beautiful library, that their journey to be a family draws to a perfect close. I don’t want to give it all away – but if you’re looking for the secret to being a family you might just find it. In a very unexpected place.

How to be a Family: The Year I Dragged My Kids Around the World to Find a New Way to Be Together by Dan Kois (Little, Brown, approx $22) is available now.