We begin as we shall end: with blather.

Hi guys! My name is Tom Sainsbury and I am very excited to meet you … through this book. You’re probably thinking, ‘Who the hell is Tom Sainsbury? And why the hell am I reading this?’ Well, those are fair questions. I guess I should do a little introduction.

Whenever I think of Sainsbury sitting down to “do” this little introduction, and then proceeding to “do” the rest of the book, I want to shake my head gently and shut the laptop on his fingers.

In retrospect the introduction functions as a content warning, and not just for its ratio of nonsense to clarity and good writing. It sets out a formula, a methodology (a conceit, which is a nice double entendre in this case) that other parts of the book prove to be broken. It should be on reddit with “AITA” at the top and many affirmative responses underneath.

Is Sainsbury the asshole? Well, he is a white guy wandering around explicitly stereotyping people for the lols. “I consider myself a scientist at heart,” he explains, sliding into the comic voice he’ll use throughout. “Now, as a scientist, an observation I made pretty early on is that there are a limited number of personalities in the world.” He presents the case study that started it all: a girl he went to school with and knew quite well. One day he went to a science fair at Morrinsville Intermediate and met another girl just like her. He deliberately hung out with this girl at lunchtime so he could grill her. “What I was doing was finding out just how similar she was to my friend … and I deduced that she was very, very similar.” From there, he says, “I started noticing more patterns.”

Of course, he’s been deploying this insight of his for years – in 2017 he made himself over as Snapchat Dude, using wigs and a smartphone to parody the rest of us, occasionally by name: see his most famous piss-takes, of Paula Bennett and Simon Bridges. He made a series for The Spinoff, Kiwis of Snapchat, which was at times brilliant. He’s written and/or acted in dozens of plays, written for telly (notably Super City, with Madeleine Sami), and picked up some screen acting roles, most recently in political comedy Sextortion. Reviewing that show, Jean Sergent called him “one of the greatest comic talents in Aotearoa”. Sainsbury has proven every which way that he can be very funny. But it’s one thing to pretend to be someone else – or a type of person – with a wig and a filter and a 60-second video. It’s quite another to write that person down. 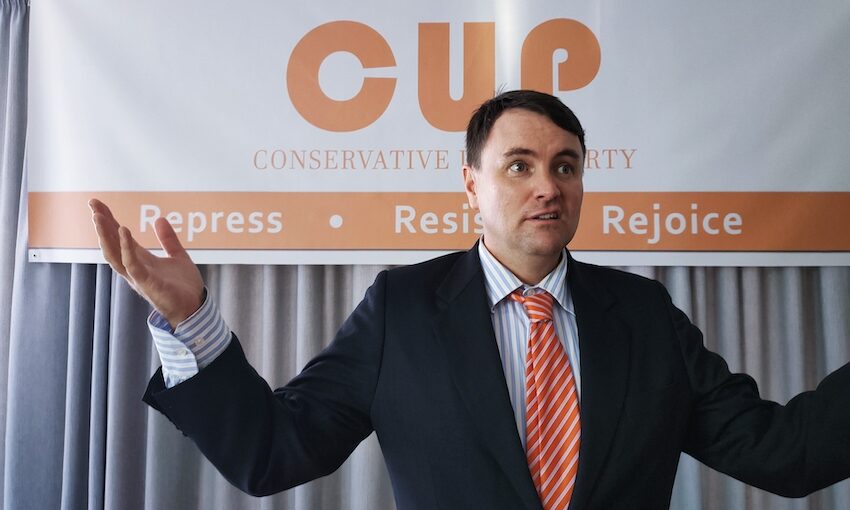 What he’s done in the book, he says, is collate “all the character groups I’ve observed over the years … I hope you recognise some of them and whisper to yourself, ‘Oh my god, this woman is exactly like my mother’ … I hope you bloody enjoy it.”

And I did enjoy parts of it. Sainsbury is good when he’s reporting, harvesting colour and anecdotes and feeding it back to us relatively unprocessed. He’s good on his own family. A passage about his grandfather (categorised as a Number 8 Wire King) is sincere and funny. I loved it, I wished there was more. He writes about a fishing trip in the Coromandel. “We were out there, fishing away, when suddenly the motor fell off the back of the boat. The bolts tentatively holding it in place were very rusty and had finally given up the goat. Without missing a beat, Gang Gang leapt over and managed to grab the motor before it disappeared into obscurity, then he simply held it in place for our voyage back to dry land … that voyage back, though, only took place after another hour’s fishing.”

I also loved The Know-It-All Dad, represented by a friend’s dad called “Bruce” (Sainsbury uses real people to front lots of the types, and generally gives them pseudonyms) who works in finance in Tauranga, and always knows best, to the extent that he wrote books about his reaction to the Bible and the Quran. “Bruce knew what was being published these days and knew there was a market for random guys’ thoughts on religion, so he didn’t do any of the suggested edits.”

I would voluntarily read a whole book of Sainsbury memoir, if it were written as memoir rather than fed through his “let’s slam people into categories” formula. I would also read a whole book of him on white men of New Zealand. Where it goes bad, though – where the formula repeatedly fails – is when he goes in on women (and, in one section so bizarre we should be kind and call it an outlier, on homeless people).

I don’t think he has any concept of the male gaze or how sick we all are of being looked at all the time, and broken down for parts. A necessarily incomplete inventory of things he likes to assess: hair, weight, skin, clothes, make-up, jewellery, vocal tics, spending habits, promiscuousness, submissiveness, snippiness, ambitiousness, parenting style. He doesn’t stop there – once or twice, he chucks in his ideas about how a woman should be, to be better. Or chides her for enjoying being the person that she is. The one he sees, at least. On a woman who knits, ie a Knitter: “As time went on, and several cups of horopito tea (made from leaves she had foraged in the Botanic Gardens) had been drunk, I started to sniff a certain artifice about the whole thing. She loved being the girl who knitted. She loved being able to wince whenever someone mentioned anything she thought of as wasteful and inorganic.”

Artifice, eh? There were times I very much wanted to hold up a mirror in front of this man.

The following is a complete vignette from the section Head Girl. Read it and tell me his formula is a good one. That it holds when you remember he’s looking down from the high country of the patriarchy: a white man with a stage.

She was a beautiful woman of Samoan descent, who had aced all her exams and was studying to be a doctor. She had also been in some high-up netball team and had won some speech competitions. She was an over-achieving all-rounder. She was kinda annoying. I mean, she was absolutely lovely. She did everything perfectly. She was even the perfect friend. But there was this … unrealness. She was too polished. There was some sort of rigidity I wanted to tear down. I wanted her to be ‘real’.

She easily glided into the second year of medical school, but then she had a breakdown. I’m not sure what triggered it, but her body threw in the towel. Her weight doubled, she failed her exams, then seemed to become a nymphomaniac and an alcoholic.

The med school was very worried about her and gave her a year off whilst she plunged into the dark recesses of existential crisis. I saw her six months into this spiral. She was clearly anxious to have run into me during a late-night plunder of the supermarket for indulgent treats. She wore a hoody and her greasy hair hung long in an attempt to hide her acne. I wanted to address this sudden change but decided she clearly didn’t want to talk so we parted after a few pleasantries.

I met her two years later and she was back on top. She was doing well at med school and was looking great. And, miraculously, the rigidity I had wanted to smash had completely dissipated. She was chill, laissez-faire, but still killing it with her grades and exercise regime. So, essentially, she had even managed to do a nervous breakdown perfectly.

Thank god he doesn’t take a crack at sketching racial stereotypes. He explains this in the conclusion (which is largely a haphazard stumble through New Zealand history and culture). “Let’s face it, who am I, a privileged white man, to talk in detail about people of different ethnicities and the nuances of their cultures when I’m just observing from afar?”

That is sound reasoning and it’s odd that he didn’t apply it to his treatment of women. But perhaps not so odd: follow the logic far enough, of course, and it shoots down the project in its entirety.

As I read and took notes about passages that pissed me off I noticed that I had started to feel quite eager about the whole exercise. I realised I was watching carefully, keen to catch him out in another wrong-headed, oblivious moment that would help stack up my argument. I wonder whether that’s how Sainsbury feels as he moves through the world – how could it not be when the schtick he’s set himself means that every night out, every phone call and shitty mall job and trip to Briscoes, every flatmate and colleague and friend from high school, provides human foible for his mill? It must suck for him, sometimes. It certainly must suck for the people around him.

Back to pragmatics, though: I think he needed an editor as irritated by him as I am. Pruning out some of the prattle would make the whole project vastly better. Telling quote: “You know that saying, ‘If you don’t have anything nice to say, don’t say anything at all’? Well, I live by the saying, ‘If you’ve got nothing to say, just fill the silence with needless words.’”

Needless words are packed into every nook and cranny here. Open the book at a random page and you’ll get a few terrific anecdotes, some great observation, but you’ll also be hit with an explosion of nothing words, polystyrene balls that just go everywhere and get in the way.

He has an infuriating habit of chitty-chatty self-serving self-deprecation. After a tremendously simple couple of sentences, he drops in: “Am I making any sense? I feel like maybe I’m confusing even myself.”

He uses “let that sink in” twice by page 16. He describes his subjects as “lovelies” and “treasures” and “heros”. He calls the PM “Cindy” in a section about lockdown. He uses “put it this way” and “don’t get me wrong”. He uses weird phrases like “snarling teeth”. Perhaps with that last one he’s angling at poetic licence, but poetic licence is revoked when you use “invariably” 50,000,000 times and you write the sentence “in my opinion, there are three main categories of rough sleepers”.

Writing that last paragraph was fun for me, and easy, because being mean is fun and easy. I bet writing this book was fun and easy. I expect it rattled onto the page and made Sainsbury chuckle and maybe even the worst parts of it will make people chuckle when they read it, too, when they’re feeling mean. And the best of us can be mean, of course we can, and oblivious and judgy and scornful, and that’s the point: we contain multitudes. Underneath all the blather, the failure to recognise that basic truth is what brings this book undone.