At first it was about the books, but my relationship with my local library has since become about a whole lot more, writes Briar Grace-Smith, whose feature film Cousins premiered last night.

I’ve done my time in libraries around the country, popping in and out of them on writers’ tours for readings, or parking up at a desk to write, but the one I’ve had a meaningful relationship with is Paraparaumu.

By the time we got together, the old and very plain library had been replaced with a spacecraft that nestled alongside wetlands occupied by ducks, pukeko and native bush. A stream – somehow managing to ditch its swag of McDonald’s wrappings collected on its jaunt past Coastlands shopping mall – runs prettily alongside. The glass side of the building captures the reflections of the clouds and sky; an echo perhaps of the dreaming going on within.

As the automatic doors of the craft softly slide open and I step inside I’m struck by what lies in front of me. On its journey through time the library has changed. It’s no longer just a place for books and their readers, but is becoming a reflection of the community that it sits in.

In a far corner, a JP takes a trickle of people through the protocols of getting a new passport. I see older people sitting in pairs or clusters sharing knowledge with those who have learning disabilities, or others who are new to the country. As always, a couple of students sleep head down in text books snoring up their words, while others read the free newspapers on offer. I’ve been here in the evenings to eat cheese, drink wine and listen to readings. I’ve sat on panels and answered questions and been to art exhibitions.

But my relationship with the library, at first, was all about the books.

As a sensitive child who slunk into teenage-hood with an attitude and, later, a young mum juggling kids and theatre work, books allowed me to slip through portals from my domestic world into other realms and experiences. The most affecting stories helped me make sense of who I was and probably influenced what I chose to write about.

At 14 I read Mutuwhenua by Patricia Grace. This was the first time I’d read a book that talked to my experience as a young Māori woman, at that time struggling with her identity. On putting it down I immediately picked it back up and read it again. The Life and Times of Patuone by Charles Oliver Davis, the story of my ancestor was a book that I loaned many times. Born on the cusp of epic change, Patuone was about five when he went out in a waka with his father to meet Captain Cook on the Endeavour. I was always moved when I thought about the turbulence he must’ve gone through. When our house in Paekākāriki was mostly gutted by fire in the late 90s, the library’s copy of Patuone was one of the only things to survive the flames.

With its couches and scattered cushions the library is a place that at once reminds me of home – I can sprawl out on a beanbag and swig on that takeaway coffee I have hidden under my jacket while reading. But also, as “the keeper of books” – of objects that connect me to a distant past and to the creative mind – it is a place I hold in reverence. 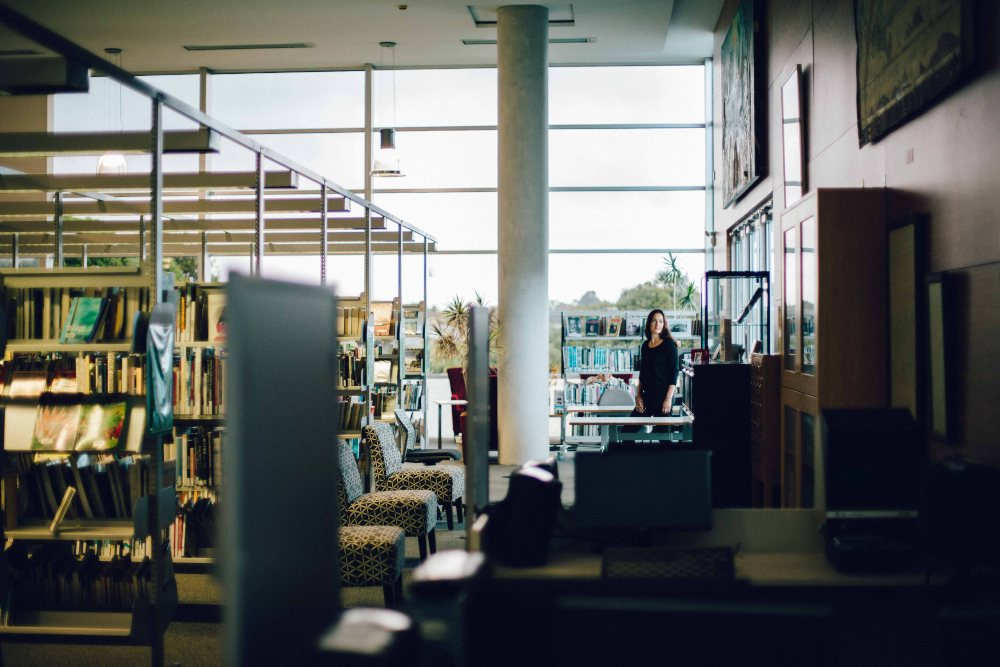 I am not a bossy person but “shush” I hiss at anyone who dares talk loudly on a cellphone. And if I meet anyone I know, I attempt to keep our whispers focused on library-relevant issues, such as the deep-rooted sexism in literary awards or Tusiata Avia’s latest collection of poetry.

My commitment to my local developed after I’d had the youngest and most diva-esque of our children, attempting to juggle writing and motherhood after a bit of a gap. As a way to give us both space I would take her to the library. I had hopes that while she played with the foam jigsaw puzzles on offer or poked gently at picture books, I’d fit in a sprint to the Māori section and pick up that new book on mythology. However this baby proved to be more of a book flinger than a book lover. She also loved to jump on chairs, drag younger babies from their nests for “hugs” and scream if I even attempted to read to her. That’s when we discovered the outside play area with its swings and slides.

Now Mairehau only goes inside a library when she has too. “It just feels restrictive,” she says. As I look around, I notice the spaces left by her and many other young people today who are like her – loud, device-wielding, smart teens.

“What would bring you into a library now you’ve outgrown the slide?” I ask her. “Food,” she says, “more technology and spaces where we can just hang out and talk without people being annoyed at us.” While still encouraging a relationship to the story and knowledge, is it possible for the library to create spaces that include their needs and oh and … could there also be a place for people like me who like to read and drink coffee at the same time?

Once my daughter became more independent, the library and I reached a good place together. Arriving early I would bully my way into one of the much coveted spots by the windows. Once there I would write for a couple of hours, in between gazing out of the windows at the often turbulent skies and the pukeko who dwelled beneath them – they always seemed to be mating or attacking each other. I would hover between the shelves of the fiction section, sliding books in and out and peering inside as their titles, covers, or blurbs seduced me. I would flick through the CDs and DVDs and emerge with a pile that I would never have the time to get through, but still I had to take them all home, because my house desperately needed more clutter.

My life has changed again since then. I don’t get to spend much time in libraries any more. But I look forward to another time, when a new and different relationship with a library will begin. And when that happens I wonder what changes I will see inside, as the doors softly slide open.