A mention from Oprah’s Book Club is manna from publishing heaven. It can burst a book onto the mainstream and shoot sales sky-high. Last week, the first book by Dr Hinemoa Elder, Aroha, was included on one of the club’s lists.

After the word arrived, staff stood around the counter at Unity Books on Auckland’s High Street last week talking in excited tones: a local book had been mentioned by Oprah’s Book Club. Two customers overheard, asked what it was and on the strength of the Oprah tip, bought the book on the spot.

That book was Hinemoa Elder’s Aroha, published late last year. And it’s the first time Unity Bookshop owner Jo McColl can think of that a New Zealand book has been sprinkled with the Oprah’s Book Club magic.

That a mention of Oprah can achieve such influence, more than 10,000 kilometres from her headquarters and a decade after her final talk show aired is testament to the enduring cultural resonance of every part of the sprawling Oprah empire, and especially that of her book club.

Oprah’s Book Club was launched in September 1992 on her television show. The first book to be recommended was Jacquelyn Mitchard’s “The Deep End of the Ocean”.

After her talk-show ended, the club was relaunched in 2012 as Oprah’s Book Club 2.0; a digital version of the once televised segment that could be accessed in multiple forms through social media and E-Readers.

Last month, prior to the official announcement, The Mental Health Foundation New Zealand contacted Dr Hinemoa Elder (Ngāti Kuri, Te Aupōuri, Te Rarawa, Ngāpuhi) to let her know that her book Aroha, which explains 52 whakatauki, had been selected for one of Oprah’s lists.

It was only once she had been tagged in the Instagram post last week that Elder knew for sure her book had been included. “It felt so exhilarating to be part of this club that is so influential.”

Shaun Robinson, chief executive of the Foundation, contributed the book to the list which was curated by mental health experts around the world for the club. It ‘s not the core Oprah Book Club list, but it’s still a big deal. 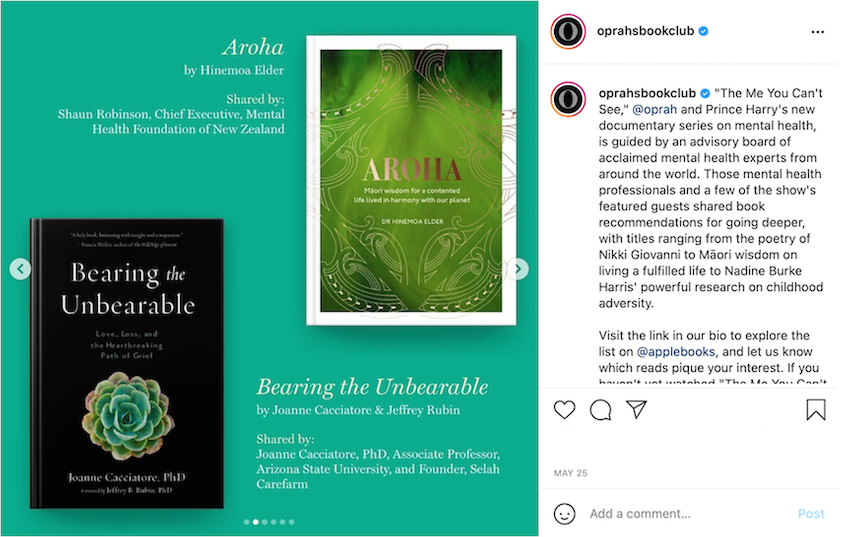 A mention like this from Oprah’s Book Club is a godsend for writers and publishers alike. The famous interviewer’s sticker of approval can make careers, propel book-sales and help books reach a far broader audience.

Toni Morrison is a case in point. Morrison held huge cultural standing before gaining mainstream popularity, but it’s hard to ignore the role that Oprah’s Book Club had in kickstarting that broader pop-culture success. When Morrison’s first novel, The Bluest Eye, was first published in 1970, it sold 2,000 copies. After being featured as one of Oprah’s Book Club picks in 2000, it sold 800,000 copies.

Post-talk-show Oprah has taken a step back from the overwhelming influence she once held. However, sporadic interviews like that interview with Meghan and Harry continue to fan the flames of her enduring cultural resonance. She remains the original fairy-godmother of taste-making.

Elder was inspired to write her first sole-authored book, Aroha in part through her work as a psychiatrist. “I see that in my work and life, human beings are in a lot of pain,” Elder explains. “I could see one source of that was to do with our relationship with the planet, especially for Māori”. Elder saw that whakatauki were one small way to help people reconnect to the environment.

Aroha had already proved a resounding success, says Claire Murdoch, head of publishing at Penguin. The book has consistently ranked in top 10 lists since it was published last year.

The book has sold 25,000 copies to date – “a very sound figure,” Murdoch says. Ordinarily, a non-fiction work selling 5,000 copies would be a figure to celebrate. It sets Aroha up as likely one of the bestsellers in New Zealand for 2020 and 2021. Publishers are struggling more generally to keep up with demand for Te Ao Māori books, says Murdoch. That demand for and recognition of indigenous knowledge frameworks “says a lot about the world now”.

As for the mention by Oprah, Murdoch says it’s too soon to tell exactly what the effects will be, but she speculates that its biggest impact could be overseas. “It’s well known to be instrumental in taking books to that next level in terms of wider audience engagement.”

And it’s part of a wider mechanism that gets people reading good books; talented book sellers, radio interviews, celebrity endorsements, good reads reviews, teachers, librarians and more, she says. “Any opportunity to take a great book to the biggest possible audience is a happy, happy thing by me.”