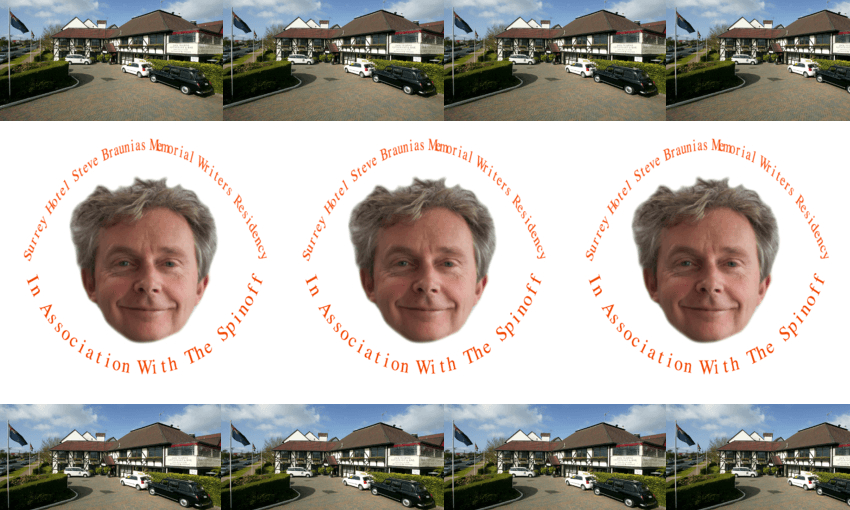 Apply now for the 2018 writers residency award at the Surrey Hotel in Grey Lynn, Auckland.

New Zealand literature’s coolest writing residency offers cash, accommodation, and pizza. The singularly appealing Surrey Hotel in Grey Lynn has once again agreed to back a writers residency award in association with The Spinoff.

The winner of the third annual Surrey Hotel Steve Braunias Memorial Writers Residency In Association With The Spinoff Award will be given a week’s free accommodation along with free breakfast and free wifi. They will also pocket a cool $500 from The Spinoff, and a lot of pizza.

There is also to be a second and third prize for five nights and four nights respectively, and with no pizza and no money, but the same honour.

Applications are open from today, and close on June 21. The winners will be announced the following week, and they have until the end of September to take up their residency at the Surrey.

We received about 100 entries last year, and closer to 50 in 2016. The grand winner that first year was journalist Kelly Dennett. She worked like a demon in her Surrey residency and broke the back of a true-crime story. The Short Life and Mysterious Murder of Jane Furlong was published earlier this year by Awa Press.

One of the runners-up was a Wellington poet and essayist who later went on to win a slightly more amazing literary award from Yale and become the most famous writer in New Zealand: good old Ashleigh Young.

Last year’s grand winner was Serena Benson. Her report on her residency, and the book project she worked on, will be published at the Spinoff tomorrow.

Winners will need to negotiate dates with Surrey management, who are incredibly nice. The Spinoff will cough up $500 in prize money as well as provide funding for a single value menu Domino’s pizza every night except on Sundays when there is a roast.

Entries must be emailed. The subject line ought to read The 2018 Surrey Hotel Steve Braunias Memorial Writers Residency In Association With The Spinoff Award. Applicants should give a very brief outline of their project. The email address is: madeleine@thespinoff.co.nz