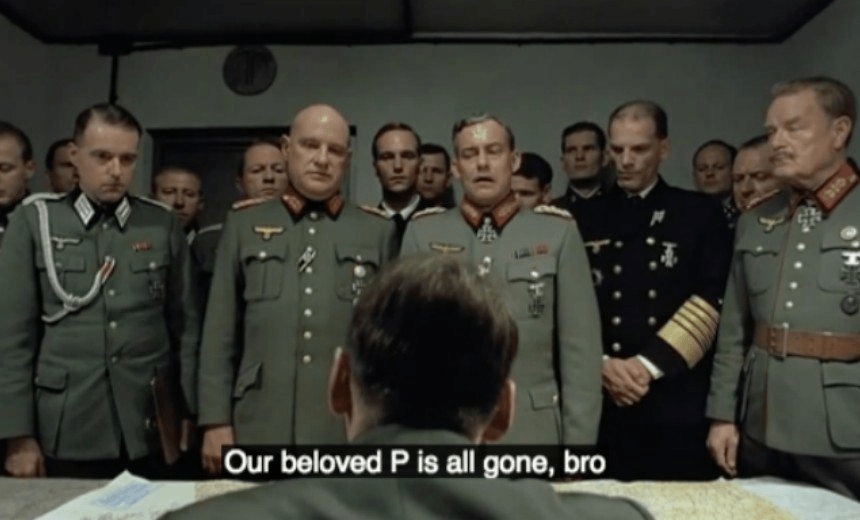 We give reviews and literary things like that a rest today and play a meme instead.

Norman Ohler’s new book Blitzed: Drugs in Nazi Germany, an investigation into widespread drug abuse in Hitler’s Third Reich, has been an international best-seller – including  New Zealand, where the book shot to the number one spot on the weekly best-seller chart at Unity Books in Auckland just before Christmas. Racy prose, a lurid subject, Hitler: it couldn’t go wrong.

All of Nazi Germany was out of its mind on drugs, claims Ohler. Soldiers were fed crystal meth. As for Hitler, he was little more than a walking pharmacy, a trembling junkie with violent mood swings.

“Crass and dangerously inaccurate,” responded the Guardian. “Overstates its case,” responded the Financial Times. “Ohler is a writer with a taste for the dramatic….His account is highly enjoyable in many places, disgusting and disturbing in others,” responded Charlotte Grimshaw, yesterday, in the Spinoff Review of Books.

All of these reviews were serious and thoughtful. It’s necessary to write about Hitler and his wretched Reich with intelligence, sense, and firm historical knowledge.

On the other hand, here’s a meme of that Hitler clip from Downfall.