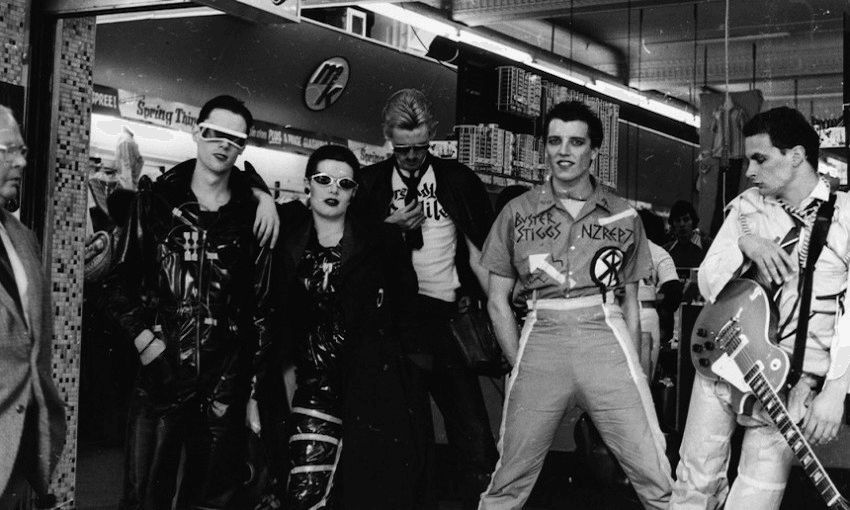 By Buster Stiggs
Guest writer
Made possible by

RIP Buster Stiggs. The legend who played in New Zealand’s first punk band, Suburban Reptiles, and later with his old schoolmate Phil Judd in The Swingers, died this month aged 63. In 2016 we excerpted a memoir in progress that he wrote for Phantom Billstickers magazine Café Reader. We reprint it below.

Hastings Boys isn’t famous for much, except it’s where the Mongrel Mob had its roots. A lot of the lower-stream students left school as soon as possible to work at the meat works and join the Mob. There were usually fights at school during lunchtimes.

Thank god the Art Room was a different world. The art teacher Roy Dunningham was a cool, switched-on guy in his early 30s. When we were all working away on paintings and projects, he’d play music on the stereo he had set up just outside his office. His vibe was The Doors, Blood Sweat & Tears, and Chicago. We could also bring in and listen to our own albums.

I hung out in the art room as much as possible – and so did another guy, called Phil Judd. He was in the fifth form when I was in the third form. That age gap alone made me a little in awe of him, but it was his artwork that really inspired me. The art teacher would often bring out work Phil had just finished to show us lesser mortals that this is how it’s done. Right from the start I followed in Phil’s footsteps. He got 90% for School Certificate art; two years later so did I.

Eventually I was singled out by a group of art room seventh formers, including Phil, who asked me to join their band – the Pooh Baar Jug Band. On weekends we’d practise in my bedroom. I had it decked out with floor-to-ceiling hand-painted posters of Lennon, Hendrix, Brian Jones, Jimmy Page and Frank Zappa. I painted the wall with the door all clouds, and put a tap on it for the door handle. There was a cut-off wooden table, with cushions on the floor, incense burning and mobiles hanging; it was our jamming den.

I played a tea chest bass that Phil built. He’d play guitar till his hand bled: he was a chronic nail-biter, which didn’t help. We jammed on Leadbelly and other blues classics.

It all came to an end when Phil and the others left school and Hastings. Phil went to art school in Auckland and two years later so did I. Phil had already dropped out because Split Enz was taking up all of his time. I helped out at many of the early Enz gigs, stage dressing and just being around. We all knew Split Enz was going places.

Around this time, I met and got to know Neil Finn, who was still at school in Te Awamutu but came to Auckland to do a half-time solo spot during an interval at a Split Enz gig. I was determined to do something with him. When he moved to Auckland he moved in with my wife Miranda Joel and me. Neil’s mum and dad, who were staunch Catholics, were only too happy to have him live with a married couple.

We wrote songs constantly. Miranda and I were looking after her parent’s house in Remuera while they were on holiday in the UK. Miranda’s dad, Wolfe, played classical flute and had a beautiful Steinway grand piano in the lounge room. Neil would pound out on the piano and I would scribble out stream of consciousness lyrics as he played. This was my first go at songwriting since I wrote a song on my bongos when I was eight called ‘Party Time’. It was so cool and Neil was such a lovely guy, so earnest and dedicated and could sing like a bird even at the tender age of 17.

We did two lunchtime gigs at the Maidment Theatre at Auckland University with Geoff Chunn on guitar and Brett Eccles on drums. I sang, played a ukulele in one song, and an old Mazzini piano accordion in another. Then, out of nowhere, Neil got the call up to join Split Enz. He went to London with only a few days notice, leaving his hospital orderly job behind and without any regrets whatsoever.

But I talked my way into another band on the fact that I had written songs with Neil – and owned a drum kit. I ran into a girl called Zero at art school and was amazed by her dress sense and fantastic makeup, and by her boyfriend Jimmy who looked Bowie-esque. I heard they had a punk band called The Suburban Reptiles. Yes, please.

Up until then, I’d really only drummed along to records like ELO, nice simple beats out at Malmsbury Villa (made famous in an early Enz song) in Kohimarama. I got the gig, and after the first rehearsal I started writing songs for the Reptiles.

I was living in Park Ave by then. I shared a place with Paul Pattie, a fantastic airbrush artist who painted our hallway with stencilled tigers on a Chinese-red background. My room was black, with red roses stencilled on the wall.

Neil had left behind his Gunn amplifier. I liked it, because the volume knob could be pulled out to put a fake distortion on the sound, which was cool as you could get a big chainsaw sound without having to turn it up. I set up in the lounge room with my new Les Paul Junior copy guitar after imbibing some sacraments, courtesy of my mate who had contacts with Mr Asia. In this relaxed euphoric state, I wrote the bulk of the Suburban Reptiles repertoire.

I’d seen the Sex Pistols on TV, and noticed that Steve Jones only played the E and A shapes on guitar. Our first guitarist Cissy Spunk couldn’t play guitar, so I just tuned her guitar to E and she single-fingered bar chords. All the Reptiles’ songs were in the major key. Cissy later had a son, Joel Little, who is a songwriter-producer and the other half of Lorde.

We created mayhem wherever we went, notably the Catholic boys’ school dance booked by Simon Grigg. Brother Humphrey was incensed. The local tabloid ran his quote as the headline: THEY COULDN’T PLAY STRAIGHT-OUT ROCK’N’ROLL.

That said, the media lapped up the Suburban Reptiles. We fed sensationalist bullshit in interviews to papers like NZ Truth that got us lots of column space: “In our spare time, we kill seagulls down at the wharf and sniff glue imported from America from the Ramones,” or, “Our 6’ 5” guitarist is only 14.” With help of Jewel Sanyo, who had a journalist background and knew how to format press releases, I got stories and photos of the band in the English music bibles Melody Maker and the NME.

The punk scene was a blast, and I made life-long friendships with many of the guys from the other bands like Johnny, Des and Brendan from the Scavengers, later The Marching Girls and Bones’ mate Kev Gray, who later married and had a family with Zero. The camaraderie and excitement of the music scene in Auckland from 1977-79 will never be repeated. Not just with the bands, but people like Ricky, who worked the door at the State Theatre gigs. He was a Mormon and didn’t drink which meant he wouldn’t be going off to buy drugs with the door money.

One night Phil Judd, fresh back from England where he had seen the punk scene first-hand, came down to Zwines to see what I was up to. In true Juddzy style, he sat outside to listen to the band. He picked ‘Saturday Night Stay At Home’ as his favourite song. We had already released the first New Zealand punk single, and first ever 12-inch single, in New Zealand on the Vertigo label, through Polygram, ‘Megaton’ b/w ‘Desert Patrol’ and the first pressing had sold out. I saw it on eBay recently for $680.

The Reptiles did a gig at the Awapuni in Palmerston North that ended when I jumped off stage to stop a guy pouring his beer into our monitors. All hell broke loose, and the pub owner stopped the gig and cancelled the next night too. So some bottles of whisky mysteriously appeared in our midst, courtesy of Billy Planet, and we drunk our revenge. Fuck that, getting bashed trying to save someone else’s PA gear.

All I wanted to do was make music full-time, play and tour. Soon after, the guy that was instrumental in signing us to Polygram got fired for stealing records to support his heroin habit. This was not a good look for the otherwise-straight record company, and they soon went cold on the Suburban Reptiles.

Things were falling apart for the band internally. There were lots of frictions. I’d known the other Reptiles for 18 months – but I’d known Phil for 10 years, and he had written songs that were a part of the soundtrack of my life. It was inevitable that we’d do something together…

All photos courtesy of Simon Grigg.