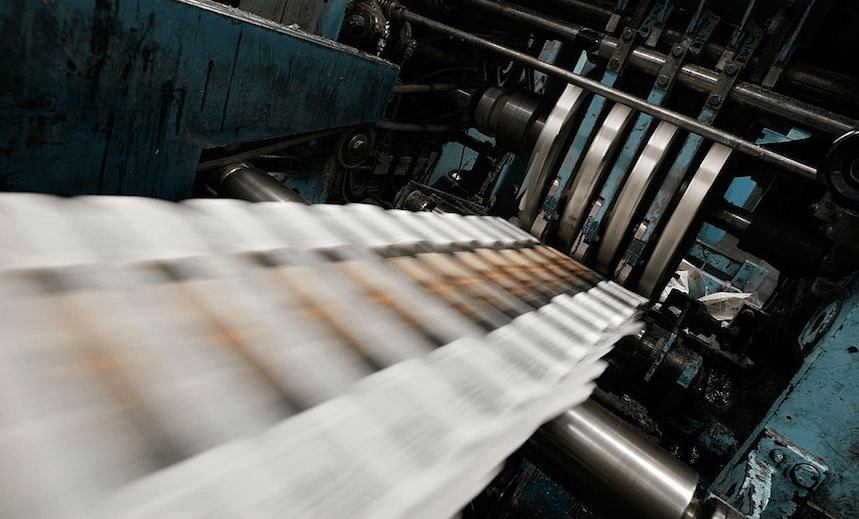 Lockdown letters #15, Fiona Farrell: Read all about it in The Daily Chirp

My granddaughter has been making a newspaper. The Daily Chirp. It’s very small, as befits a newspaper designed for birds, but it contains news (a worrying rise in Tweet-19), “Adds” for birdseed medicine (Fight the Tweet-19 virus!), and a special Lockdown feature. (“Giants are in lockdown! Read more next week.”)

There is such poignancy in the way children fashion crisis. I’m reminded of the preschoolers in Christchurch in 2011 who played obsessively at Earthquakes, arranging all the toys they could muster on a trampoline, then bouncing till they flew. Or ourselves as children turning a war that had been all too real for our fathers into fierce games fought with pinecones and sticks.

These mornings I wake to a quiet city, still in darkness around 6am. A car comes to a stop on York Place, engine running, there’s the muffled sound of radio, and then the click as our letterbox receives the Otago Daily Times, the ODT, the Oddity.

It’s still a novelty for me. A daily paper. For years I lived 20 minutes from a letter box. News filtered down into our valley on airwaves and the internet. But when we moved to Dunedin I took out a subscription. I know it’s a bit Downton Abbey (“I say, the first world war has broken out. Would you pass the marmalade?”) but I like newsprint first thing in the morning. I like tea and toast alongside headlines and letters to the editor and photos of people who have grown enormous pumpkins or bombed Baghdad. I like opinion pieces, even when those opinions leave me fuming. Earlier this week I was up for the Oddity’s delivery. I flung open the front door. ‘Thank you!” I yelled to the man in the car. He waved vaguely at the old bat shouting in the dark and left hurriedly.

But, really, thank you. Even though this morning’s edition has buried the news of Simon Bridges’ 1,000km return commute, and Shane Reti’s 1,600km return commute from Whāngārei and Louise Upston’s 1,100 km return commute from Karapiro, all made during the first week of lockdown. It’s on page 15. The second-to-last page, under a photograph of the president of Belarus tossing a teddy at an ice hockey game in Minsk. But thank you, editors and journalists. I enjoy watching you tell this country’s story, how you frame the narrative, what you choose to mention, what you choose to ignore, what words you use, what seems to be sacred fact, what seems closer to speculative fiction.

The thing is, I find myself inhabiting two realities. One is the reality that slides into the letterbox at 6am. And onto the screen at intervals through the day. And at 1pm in the dazzling double act that is Bloomfield and Ardern, batting facts back into the media scrum, calm before the clamour. This is the reality of statistics and strategy and politics, the public reality I share with everyone else in this country. The New Zealand story that’s entranced and infuriated me all my life, the drama in which we all have walk-on roles whether we want them or not.

The other reality is mine alone. It’s private and full of feeling.

Sometimes it’s delight. The poignant delight of some small thing, like The Daily Chirp with its squished printing and tiny courage.

Sometimes it’s a flicker of fear. There was a woman yesterday afternoon, in a blue dressing gown and slippers on a suburban street. “Hello, dear,” she said, as we approached. “Hello. I know you, dear. I’ve seen you before.” Her face was sweet and vacant. She reached out her hand, came closer, too close. We stepped aside. She followed us. We could hear her slippers flapping behind us on the footpath. “Hello, dear,” she said. “Hello, dear. I know you.” Over and over. We walked faster. She slowed. We looked back from the corner. She was approaching a woman with a black Labrador. I felt small and mean. One who passed by, fearful of contamination.

And sometimes it’s an absurd triumph. Two days ago I found a bottle of yeast. Who knew that the New Zealand response to global pandemic and the imminent collapse of capitalism would be to get out the baking tins? At the slightest whiff of chaos those little bottles of yeast had flown from the supermarket shelves like harrier hawks. I wanted to make Easter buns, the lumpy, leaden Easter buns I’ve made in the past with the white bits on top that look neither hot nor cross. I looked out the yeast in the cupboard. It had expired in 2011. I tried to find a replacement and two days ago there it was: a solitary bottle.

I seized upon it with such pleasure. Mine! My yeast! And on Sunday, there I’ll be, watching as it bubbles up and ordinary old flour will rise from the dead and I’ll feel ridiculously happy.

I recognise this state, this double reality. It’s the same world I inhabited for months following the quakes, and I don’t think I was alone. Responding to sudden shocking change requires a double lens. You need cool objective fact, and you need the lovely, complicated intensity of feeling.