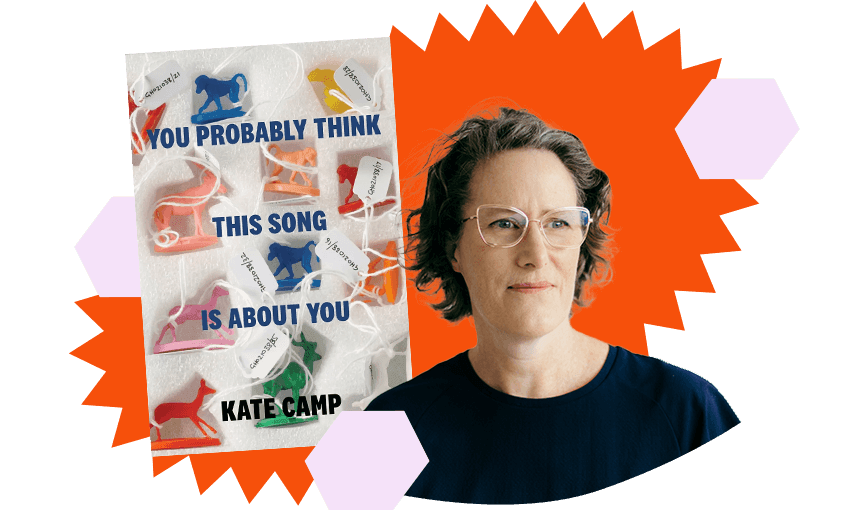 The many humiliations of Kate Camp

Poet Heidi North on Camp’s brilliant and brave new memoir, You Probably Think This Song is About You.

“Never apologise, never explain,” is one of the (potentially dubious) nuggets of life advice Kate Camp’s mother gave her in childhood. This collection of startlingly clever, droll personal essays doesn’t offer any kind of explanation – rather it is an act of exploration of what it is to exist in this world.

Whether she’s describing writing anti-Reagan graffiti on a toilet block, accidentally smuggling drugs into prison while visiting her then-boyfriend, encountering a rottweiler during a stint as a door-to-door Greenpeace campaigner, or pissing her pants in a surprisingly large variety of places, Camp maintains a startling honesty. The essays traverse her life in unexpected ways through childhood, adolescence, all the way to the more recent past, where we glimpse the adult Camp, staying with her husband and her mother in the Watergate Hotel in Washington DC, heartbroken as Hillary Clinton loses to Trump.

I loved Camp’s last book, her poetry collection How to be Happy Though Human, and in many ways I see that as the precursor to You Probably Think This Song Is About You. There is a line that kept coming back to me while I was reading this memoir:

Inside me are the Russian dolls

of the women and girls I’ve been before

each more beautiful and unhappy than the current.

– from Camp’s poem ‘One train may hide another’.

Despite being roughly a decade younger than Camp, who’s a child of the 70s and 80s, I, too, feel like this song is about me. I find myself reacting with a visceral Yes, I understand! to some of the things she recounts in her essays. I feel a rush of compassion for my 14-year-old self when Camp admits to her now embarrassing, but at the time life-saving, attachment to Louise Hay’s 1984 self-help book, You Can Heal Your Life. (I admit I also used the affirmation “In the infinity of life where I am, I am perfect whole and complete”, to haul me through some very difficult teenage years. And like Camp, I’ve since developed a critical disdain and even horror for some of the ideas in the book.)

I find it so much harder to hide in prose than in poetry. In poetry you can leave gaps and blank spaces and pretend the “I” in the poem is someone who looks and sounds a lot like you but isn’t really you. But in personal essays the you is only you.

And here, Camp deals with some tough subjects. In one of my favourite essays, ‘This wheel’s on fire’, she lays out some disastrous early relationships she had with men, all of them toxic and brutal; the kinds of relationship you never want to admit to having had or worse, having wanted. Throughout the collection sexual assault is skirted around, domestic violence, infertility, substance abuse, suicide – but it’s all looked at from the vantage point of a woman looking back. The Russian doll has clearly got her life together, meaning these painful things can be seen as part of the story, not the whole story, the way tragedy can feel when it’s told fresh. It doesn’t make it any less heart-wrenching though:

Now I’m standing in the doorway of our relationship, I feel exhausted. I try to remember some good times, some ordinary times.

While Camp goes deep on herself, ripping open difficult and embarrassing wounds and messes she has made, there are gaps in her story too. She treats the people around her with dignity and respect. We know, for example, that her parents divorce, but that is mentioned only obliquely, in passing. She treads lightly on other people’s lives, referring to them only in terms of how they relate to her, such as “my sister’s then boyfriend”. That’s not to say we don’t get a picture of people. The cast of characters, especially Camp’s mother, are drawn in loving detail, but it’s done with generosity. This isn’t a book out to expose other people’s secrets.

Nor is it all tough stuff. There is also wit and a sharp dry humour. I found myself giggling often: “If you have not lived through the seventies or the eighties, it is hard to comprehend just how popular woollen wall hangings were as a form of corporate décor.”

I keep wondering what gives Camp the courage to be so honest on the page. I wonder what kind of conversations she had while she was writing. Did someone say to her, as my publisher said to me – before I published a collection of poems about my collapsed marriage, my failure – that books have power once they’re out in the world? That you can’t put them back?

Camp explores this obliquely in one of her essays, where she talks about writing a victim impact statement about a home invasion and assault that happened to her mother. “You can’t think about the audience, whether they’re a reviewer, a relative, or a rapist, all you can do is write the truest thing you can.”

But there is a moment when you’re on that precipice and you have to decide to transition – from the writer bleeding it all out onto the page by yourself, to someone who still has to live in the world, with colleagues, family, friends, all reading.

When my manuscript was at the final proof stage, my publisher – the kindest, most diligent woman in the world – called and said, in her careful way, “I just want to be sure you want to do this. Imagine the school mums might read it.” And I had a terrifying, last-minute wave of doubt before I took the plunge. I wonder what Camp’s moment was like. Or if she is simply fearless.

Or maybe it isn’t about being fearless or brazen, truly not caring what people think, but about processing a vulnerable kind of bravery, one that uses what you have, so that the mess, the failure, the pain, is not wasted. We can feel Camp’s compassion for her past selves, those Russian dolls, and that allows us to feel compassion for our past selves, too.

As Camp muses: “Sometimes I think humiliation is the most powerful force in the universe. Years, decades, lifetimes later, you can still bring it to mind … it never fades because it’s kept from the light.”

These stories are about pulling that pale squirming worm of humiliation up and holding it firmly to the light. All the Kates we encounter in these pages show a person who has always been brave, plucky, full of bravado, even when she hits the bottom, again. As she writes, “When you think about rock bottom, it sounds like a one-time thing, but in my experience it’s a place you end up going to over and over again.”

She describes herself in one of her toxic relationships as being fearless up until the last second, never backing down, goading until the moment when her ex made a fist, and then she would break spectacularly, becoming almost a caricature of a cowering woman.

All you can do as a writer is use it. Transmute it into a story. Laugh about it, until the tears come, if necessary. It’s all that you have.

but you can make a home

even your own hand

when you hold it over your mouth

because you’re starting to cry.

You Probably Think This Song Is About You by Kate Camp (Te Herenga Waka University Press, $35) can be ordered from Unity Books Auckland and Wellington and should be available in store from 14 July.

We’ve also published an excerpt from the book, about Camp’s decision to stop IVF treatment. Read it here.