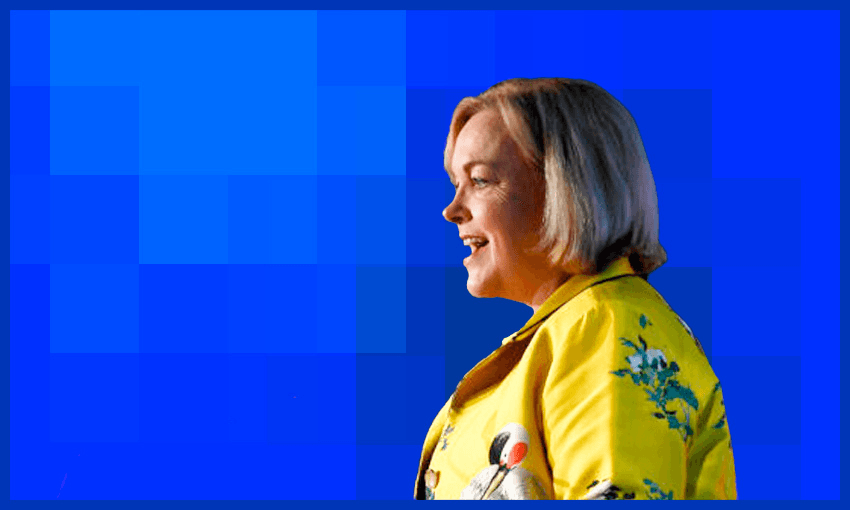 ‘We did not look like a credible alternative’: Judith Collins on the 2020 campaign

By Judith Collins
Guest writer
Made possible by

In this second of a series of extracts from the new collection Politics in a Pandemic, National Party leader Judith Collins reflects on taking the job on at the eleventh hour, the high points and the lows.

Sometimes it seems like a lifetime ago, but it was only three months before the election that I became the leader of the National Party. I try to remember it by recalling that it was Bastille Day. It was a tumultuous time for me, at the end of a difficult three years for the National Party culminating in a significant loss at the 2020 election. National gained just 26% of the party vote compared with 44% in 2017. We lost over 400,000 votes and with just 33 MPs our caucus and our opposition resources have been seriously depleted. It has been very tough to see so many of our talented and hard-working MPs and their staff leave parliament and their electorates.

When some of my colleagues asked me to take over the leadership the night before Todd Muller announced his resignation as leader, I had serious reservations. My first reaction was “no”. I think my second was “why”. It was eight weeks out from the original election date and we had just been plunged into chaos. I wouldn’t quite describe it as a poisoned chalice but it was hardly a golden ticket either. The political timing and conditions were far from ideal. We were up against a first-term government with an incredibly popular leader. The government was widely perceived to have done a good job in managing the response to Covid-19. Whilst it had failed to deliver on most of its promises from 2017, including child poverty reduction, KiwiBuild and light rail, all that had been swept away by Covid-19. In contrast, we appeared to be in disarray.

I spoke to my husband, whose reaction was the same as mine. I decided to sleep on it. By the morning, I had decided if there was ever a time I needed to step up, it was now. And I am an optimist: I genuinely believed the election was still winnable by us if things went our way and if we could give New Zealanders a reason to change the government. Unfortunately we didn’t do that.

Despite the result, our team had some great moments on the campaign. Lots of things went well, especially when you allow for the speed we had to do everything under. But it is undeniable that a lot went wrong too. Events beyond our control, Covid-19 and then the second lockdown in the middle of the election campaign had a significant impact. But we were also let down by avoidable mistakes, and self-inflicted distractions and wounds.

When he became leader in May 2020 Todd Muller had established a new team of senior staff; most of them hadn’t worked together before. I kept that team in place, bringing in a couple of additional people. The circumstances of the leadership change meant there was no time to do anything else. The campaign machine or infrastructure of past elections had massively thinned out. The new campaign team had been forced together at short notice. Covid-19 lockdowns and two leadership changes meant we were not as well organised or prepared for an election as we had been in the past. There were also problems with our policy platform, issues with campaign management, themes, messaging and discipline – and, of course, distractions and scandals of our own making.

Within days of becoming the leader I was managing the fallout from the Hamish Walker / Michelle Boag scandal, the resignations of Nikki Kaye and Amy Adams and then the Andrew Falloon scandal. And, unfortunately, we were plagued by other problems throughout the campaign. I inherited the campaign themes that had been announced by Todd Muller on July 8 2020. Those themes were responsible economic management; delivering infrastructure; reskilling and retraining our workforce; a greener, smarter future; and building stronger communities. The themes had been set and some collateral had been produced but we never managed to get any real traction with our campaign themes. And our themes were frequently undermined by events, mistakes and distractions.

Secondly, mistakes, such as the “fiscal hole”, were a major blow to our campaign. Our polling had indicated that National was considered the strongest party on the economy and that this was the area we should focus on, rather than health and the response to Covid-19, where Labour was considered stronger. However, we had issues with our economic narrative from very early on in the campaign. The 30% debt target that had been announced in July led to speculation by our opponents that such a target could only be achieved by $80 billion in austerity measures. Then we had the $4 billion “fiscal hole” story which broke on the morning of our belated “virtual” campaign launch, two days after the release of our economic plan and short-term tax relief package. In a complete role reversal from 2017, we were coming under considerable media pressure over our numbers. It was a significant dent to our economic credibility and made it that much harder for us to convince New Zealanders that they should entrust us to oversee the economic recovery. Even though our fiscal plan had been independently costed, reviewed and endorsed we were unable to convincingly counter the “fiscal hole” allegations that continued throughout the campaign.

Thirdly, distractions: while the country was focused on Covid-19, the National Party looked like it was far too focused on tittle-tattle and internal politics. We did not spend enough time talking about the things that matter to New Zealanders – issues like jobs, debt, housing, transport, health, education, law and order. When we did talk about them, our message was often drowned out by destabilising distractions and scandals.

Our law and order policy announcement was overshadowed by the untidiness of the Auckland Central candidate re-selection in the wake of Nikki Kaye’s resignation. Our housing policy announcement was obliterated by the leak of Denise Lee’s email. The email was leaked just before my media stand-up and the media were far more interested in the leaked email than our housing policy. The first I knew of Denise Lee’s concerns and the email was after the housing announcement. The destabilisation from this leak was a body blow to the National Party that we never recovered from. The combination of events, mistakes and distractions meant we did not look like a credible alternative government. We did not look like a government in waiting. And it was reflected in our election result and our reduced caucus.

Despite our shock and disappointment at the result, New Zealanders have spoken and we must listen. We must analyse what worked and what didn’t and heed the lessons from our defeat. To that end, the National Party announced a comprehensive external review, overseen by a review panel. The review was tasked with considering election preparedness, candidate selection, caucus performance and the election campaign, including strategy, narrative and selection. The panel is composed of experienced people who were not involved in the day-to-day running of the campaign. It has a wide mandate to seek feedback from anyone and explore any areas it chooses. We are taking this review extremely seriously. We will take the recommendations on board, institute change where it is needed, and rebuild.

The next three years will be incredibly important for this country as we recover from the economic damage caused by Covid-19. The National Party may not be in government, but as the opposition we have one of the most important jobs in the country. We will be a strong and effective opposition who will hold the government to account each and every day. The Labour Party may have “unbridled power” in terms of numbers but the opposition will keep the government on its toes. And we will build an alternative vision over the next three years that reflects the National Party values of individual freedom and choice, personal responsibility, limited government, competitive enterprise, equal citizenship and opportunity. I know what an honour it is to be the leader of the opposition and I am proud to lead a team of such talented and effective MPs. I have huge confidence in our caucus and our staff. We have taken a battering but we have got up and we are working together very well.

This is an edited extract from Politics in a Pandemic: Jacinda Ardern and New Zealand’s 2020 Election, ed Stephen Levine (VUP. It is based on a speech delivered at the post-election conference in December 2020.

Read the party leaders’ reflections on the 2017 election, from Stardust and Substance, here