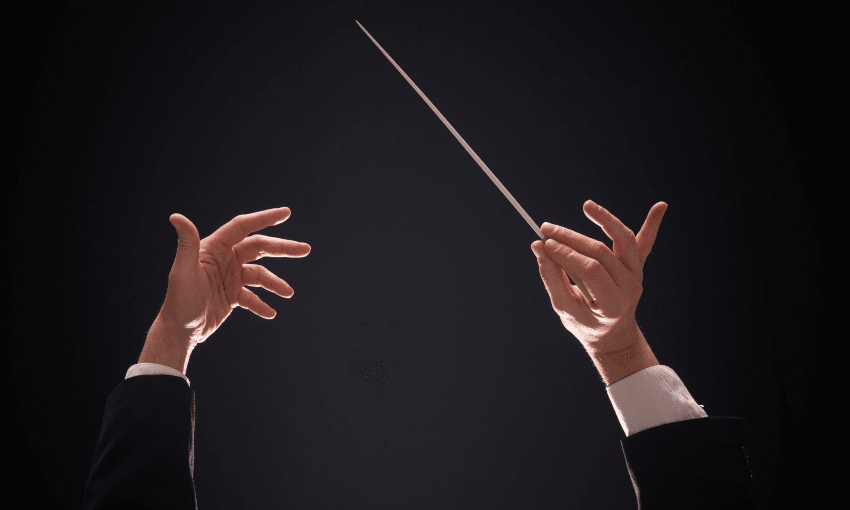 Missing persons: How poets are erased in the world of classical music

By Bill Manhire
Guest writer
Made possible by

In New Zealand classical music, the writers of words are routinely hidden from view. If they care so little, why not settle for humming the melody, asks NZ’s inaugural poet laureate, Bill Manhire.

I watched the Whānau London Voices concert the other day, and admired the initiative and spirit of the venture, as well as the show itself; I even made a donation! But I was troubled by one of the assumptions about the relationship between music and words. Somehow the authorship of the words didn’t matter much at all. This isn’t an assumption specific to the Whānau project, but one that seems to inform the wider world of classical music.

It was all OK at first.

I was pleased to see Bub Bridger getting a credit for each of her five poems from Wild Daisies: she even snuck in before the composer: “Bub Bridger/Ross Harris.” Amazing!

But later there came along an excerpt from ‘Sings Harry’, one of New Zealand’s greatest poems, and written – as many but certainly not all New Zealanders know – by Denis Glover. But here is how the attribution was made on-screen: “Douglas Lilburn ‘Flowers of the Sea’ from Sings Harry”. Where had Glover gone? Then there was another Lilburn number: “Douglas Lilburn ‘The Hollyford Valley’ from Elegy”. But of course Elegy is a poetry sequence by another erased writer, this time Alistair Te Ariki Campbell. If the words matter so little to composers or performers that they can’t be bothered naming the writer, why don’t they just settle for humming the melody?

And then one of the most famous poems in the English language, William Blake’s ‘The Tyger’, turned up in a setting by Jenny McLeod. But all it said was: “Jenny McLeod, Tyger, Tyger.”

Further on in the programme there was an item I had been told might be appearing – a piece Gareth Farr and I had written as an addition to the group of four bird songs we created last year for Julien van Mellaerts. We had voiced four other birds for the original commission (part funded by Chamber Music New Zealand and the Wanaka Festival of Colour), and Julien had subsequently asked if a kiwi could be added for a performance at the Wigmore Hall. I was reasonably pleased with my words though I hadn’t heard the resulting song or seen the musical setting; but there had been good reports of the London performance and I was keen to discover how it had worked out.  And there it was … at last … “Gareth Farr – ‘Kiwi’ from Ornithological Anecdotes”. Just like Glover and Campbell and Blake, I had become a missing person. But unlike those others, I wasn’t the author of an extant poem – I had produced my words specifically for this song.

I want to say that there are better ways of describing the joint authorship of a song than the classical music world seems to know about. Here’s how the National Library’s Poet Laureate website describes one of the other bird texts: “This poem is part of a commission from baritone Julien van Mellaerts to Bill Manhire and Gareth Farr for a set of songs about New Zealand birds.” (The note is followed by a link to the video of the 2019 performance of the songs.)

Attribution conventions in the wider world of popular music are strikingly different from classical practice. We know perfectly well that ‘Some Enchanted Evening’ was written by Rodgers and Hammerstein, not by Richard Rodgers alone. Likewise all the individual songs in South Pacific and Oklahoma and The Sound of Music. The songs in West Side Story were written not by Leonard Bernstein, but by Leonard Bernstein and Stephen Sondheim, and Sondheim (as far as I can tell) never gets erased in the credits. Also: Elton John and Bernie Taupin, George and Ira Gershwin, Burt Bacharach and Hal David, Joe Strummer and Mick Jones, Lerner and Loewe, Gilbert and Sullivan …

I have an occasional but longstanding songwriting partnership with the jazz performer and composer Norman Meehan. Our collaboration is very straightforward. I never feel set aside or hidden from view as I do in the classical world. Look: there are our names, equally weighted, on the several CDs we have produced. We also have a practical arrangement: we both belong to Apra, and any performance or broadcasting revenue is split 50:50. The arrangement is explicit and equitable.

As it happens, I have the same arrangement with Gareth. We’ve agreed – informally, over coffee – that any revenue-producing performances of the bird songs, other than those involving Julien van Mellaerts, should see a 50:50 financial split. But I’ve just noticed that there is now some sort of sheet-music edition of the original four songs featured on the Promethean Editions website.  It can be purchased for $57.50. The cover says: “Gareth Farr / Ornithological Anecdotes / Baritone and Piano”. There I am: gone again.

I mention these examples simply because they are characteristic and recent, immediately to hand. It would be easy to supply more. There are no guilty persons – the problem is a longstanding and general one, and seems to exist primarily in the world of classical music. Whether this is a particularly New Zealand thing or international in dimension, I do not know.

The Unesco-founded International Music Council has a charter that specifies Five Music Rights, the fifth of which is “The right for all musical artists to obtain just recognition and fair remuneration for their work”.

Am I a musical artist?

I wonder if organisations like Sounz (who declined to publish an earlier version of this piece) and Apra and Canz should work with one another on a set of guidelines that give writers just acknowledgement and fair recompense for work where words and music come together on relatively equal terms? Perhaps there could be facilitation from Creative New Zealand, who after all support both writers and musicians. I expect musicians would be as pleased to have thoughtful guidance as poets and lyricists.