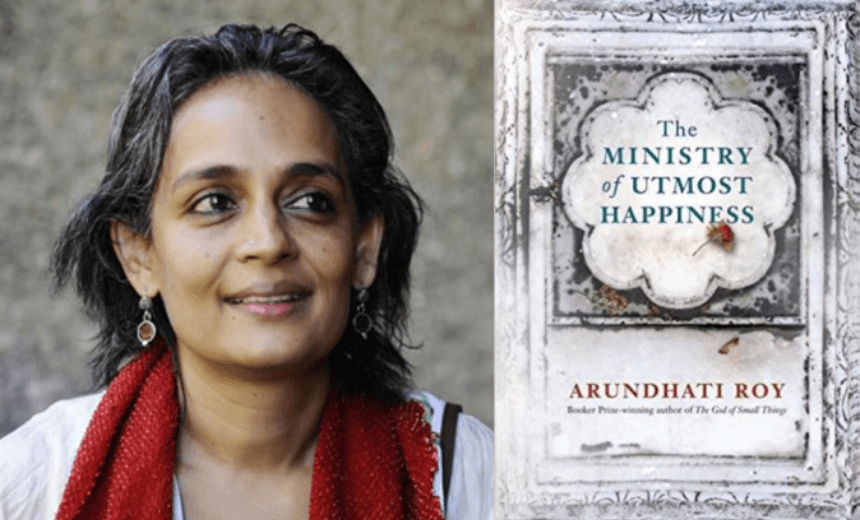 Arundhati Roy and the misery of that difficult second novel

By Marion McLeod
Guest writer
Made possible by

It’s 20 years since Arundhati Roy published her first novel, The God of Small Things, and won the Booker. She was the first Indian actually resident in India to do so. A few months later, she was a guest at Wellington Writers’ and Readers’ Week. She was a lot of fun, very smart and not the slightest bit puffed up by sudden success. When I interviewed her for the Listener, she told me she had absolutely no plans for the future, and didn’t know that she’d ever write again. There was just one thing she fancied – she might give herself a childhood. At 36, with the Booker under her belt, Roy liked the idea of living life backwards.

Childhood wasn’t too good the first time round. Her mother, a Syrian Christian, had married a Bengali Hindu. Romeo and Juliet without the bodies. When her parents divorced, Arundhati, then two, and her older brother went with their mother. It was pretty grim. Divorce was a badge of shame, a stigma. Arundhati grew up an outcast, mixing only with the lower caste.

A childhood on the outer is grist to the mill for many a writer, of course, and Arundhati Roy didn’t give up writing. She turned to non-fiction: The Algebra of Infinite Justice; An Ordinary Person’s Guide to Empire; Listening to Grasshoppers; Capitalism: A Ghost Story . . . Nine non-fiction books in all.

Roy is good at titles, and she’s extremely good at rocking the boat, both in person and on the page. She is for Kashmiri independence, against Hindu nationalism, against globalisation, against capitalism. And a fierce critic of US foreign policy. If she’s having that second childhood, then she’s the naughtiest girl in school.

In return, the Indian government is fiercely critical of Arundhati Roy. It charged her with sedition. Roy is hysterical, they say. And she’s more than happy to own that hysteria, as she told the magazine Frontline. “I am hysterical. I am screaming from the bloody rooftops. I want to wake the neighbours, that’s my whole point. I want everybody to open their eyes.”

I think it’s fair to assume that Roy wants her new novel to wake the neighbours too. She started on it a few years ago and once again came up with a terrific title. The Ministry of Utmost Happiness. (We could do with one of those.)

It’s not easy to describe or summarise The Ministry of Utmost Happiness. It is political but not straightforwardly so. You might call it a patchwork. It includes the occasional list, the odd questionnaire, and a few surreal quizzes. Each chapter is prefaced by words of wisdom from writers and prophets, some in languages other than English, most – but not all – translated.

It’s about caste and class, about war, torture, rape, and abuse of the environment, which means that for most of its 438 pages, happiness doesn’t get much of a look in. I grew increasingly impatient for the Ministry of Utmost Happiness to turn up but the novel is nearly over before it makes an appearance, which is frustrating, if metaphorically apt.

The first human character we meet is called Anjum. Anjum lives in a graveyard. At dawn she sees the crows off and welcomes the bats home. At dusk she does the opposite. Between shifts she confers with the ghosts of vultures.

Anjum, we learn, was born to a couple who have three daughters and long for a son. The night of his birth was the happiest of their life. They name him Aftab. Yes, this name-changing and pronoun-jumping is bewildering but then this is a bewildering book. The day after the birth, the mother unswaddles her baby and discovers “nestling underneath his boy parts, a small, unformed, but undoubtedly girl-part.” Baby Aftab is a hermaphrodite, a Hijra (a Bengali term which covers various sorts of sexual ambiguity). I don’t know when Arundhati Roy lighted on gender confusion as a theme but it was certainly a timely decision.

I grew very fond of Anjum. I clung to Anjum. She got me through the opening chapters, which move to and fro in time and place and tone, demanding serious concentration. There was no through-line, I kept losing the plot. But whenever Anjum appeared in her graveyard home, both the prose and I perked up.

Anjum brings story. She is down-to-earth and upwardly mobile. As a boy, Aftab hadn’t been allowed to go to school. He could only watch the other children play. Now, in the cemetery, Anjum builds herself an empire. At first she lives in a tin shack but soon she moves into a hut with space for a bed, and next graduates to a small house with a kitchen. Finally she builds a guesthouse, the Jannat Guesthouse, which becomes a hub for Hijras. “Anjum was whimsical and irrational about whom she admitted and whom she turned away – often with unwarranted and entirely unreasonable rudeness that bordered on abuse (Who sent you here? Go fuck yourself in the arse), and sometimes with an unearthly, savage roar.”

A houseful of hjiras in the middle of a graveyard makes for easy colour. There’s Saddam Hussein, for instance, who is deeply in love with Anjum, his landlady. He’s another who has changed identity: “When I first saw the video of the hanging of Saddam Hussein I wanted to be like him. I decided to become a Muslim and take his name.”

This Saddam Hussein is an interesting cove but he made for rather disturbing reading. Whenever his name cropped up, I would see in my mind’s eye his better-known namesake.

Too often, Roy’s larger-than-life characters are just too much of a good thing. A bare-torsoed man with yellow limes stuck all over his body with superglue sucks noisily on a thick mango drink. Another wears a suit and tie: from a distance his suit seems to have kebabs printed all over it, but on closer inspection they turn out to be perfectly shaped turds. Zany performance artists can be as tiresome on the page as in life.

Granted, Roy also gives us a handful of men and women we can care about. They appear in love stories and war stories, in vivid passages which are lyrical or terrifying or both. The chapters describing the conflict in the Kashmiri Valley are truly excellent, capturing the poignancy and dignity of the besieged people. We feel sadness and dismay, and the deep despair of the narrator. The torture sessions are truly shocking – again demonstrating how effective Roy can be when she steers clear of bravura flourishes.

Elsewhere, the novel has too many shifts of focus, too many sub-plots and digressions, too much chopping from one time to another, too many characters, often with several names apiece. It’s just too hard to keep track: it’s terribly un-PC, I know, but at times I found myself longing for The Raj Quartet.

Arundhati Roy is attempting something hugely ambitious here: to tell “a shattered story,” to capture India’s diversity and vitality on the page. She, or to be precise her narrator, claims: “I would like to write one of those sophisticated stories in which even though nothing much happens there’s lots to write about. That can’t be done in Kashmir. It’s not sophisticated what happens here. There’s too much blood for good literature.”

Tell that to Macbeth. There is good literature here in Roy’s novel, and some of the best is bloody. But the shattered story is too often just plain confusing, a hotchpotch rather than a patchwork, a jigsaw with many missing pieces.

The God of Small Things centred on one family. It was less ambitious but more supple and poignant, and it held and captured readers worldwide. The Ministry of Utmost Happiness isn’t centred. It teems with anecdote but there is very little dialogue. Instead, Roy builds this story of contemporary India with slabs of summary, with too much polemic and not enough poetry.

The Ministry Of Utmost Happiness by Arundhati Roy (Hamish Hamilton, $38) is available at Unity Books.