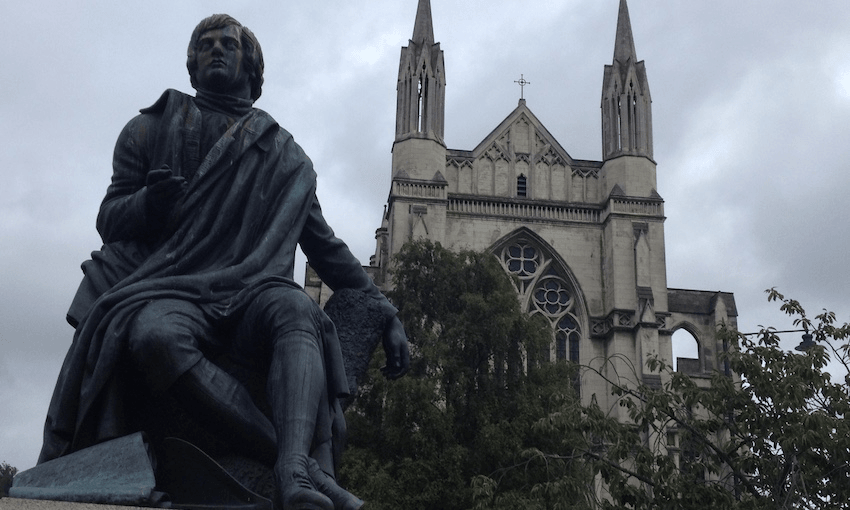 Was Robbie Burns a rapist?

By Helen Speirs
Guest writer
Made possible by

Robert “Robbie” Burns, Scotland’s national poet, feted worldwide, author of “Auld Lang Syne”, commemorated in Dunedin with a handsome statue overlooking the Octagon, one of the immortals of literature – and, now, accused as a “sex pest”, a rapist, “Weinsteinian”.

Scottish poet Liz Lochhead has unleashed a storm of controversy with her remarks in the Guardian. She cited a 1788 letter by Burns to a friend in which he bragged of giving his lover Jean Armour a “thundering scalade [a military attack breaching defences] that electrified the very marrow of her bones”, and said he “fucked her until she rejoiced”.

For Lochhead, this “disgraceful sexual boast … seemed very like a rape of his heavily pregnant girlfriend. It’s very, very Weinsteinian”.

As well, the Guardian reported Burns biographer Robert Crawford saying Burns had “his Weinstein moments”, and it published an article last year in which critic Stuart Kelly also labelled the bard a “rapist”.

The momentum of the #MeToo movement, it seems, has caught up with an 18th century poet. But is the discussion warranted or wearisome? The facts of Burns’ sexual profligacy (he fathered 12 children to four women) are well-known.

Dunedin poet and Landfall editor Emma Neale says that if the accusations of rape hold water, then Burns’ attitudes and actions are “repellent” – although sadly nothing new. “Women have been protesting sexual aggression for centuries.”

However, she urges caution “when equating poems with the life; perhaps especially bragging poems; they are performances, often, not empirical evidence of actions”.

“I think we can only attend to fixing our own time’s moral compass, which we adjust partly by reference to what has gone before.”

She will not dismiss Burns, his poems and songs, therefore, and would “leave Robbie on his pedestal in the Octagon”, but says “I’ll be reading all the new poems too, and singing hooray for the sound of all the voices for too long silenced by the old ways”.

One of those new voices must surely be Jill O’Brien, who highlighted Burns’s bragging in her poem “Reply from the Lassies: #Me an Aw“ which won Dunedin’s annual Burns poetry competition last month.

“Were Burns’ sexual activities consensual? We don’t know for sure, but given the imbalance of power between this educated wealthy man and a young servant girl, it seems unlikely,” she told the Otago Daily Times. “I wanted to make the point that those who write history can’t write it to suit themselves and leave out the bits that don’t fit with the myth, in this case the myth of Burns as role model of Scotland.”

How then does Dunedin officialdom view Burns in light of the latest controversy? Is he still a fitting role model for our Unesco City of Literature? Should his statue remain in the Octagon, and is a fellowship in his name still appropriate? Can we separate the artist from his art? Is it fair to view and judge an 18th century male poet through a 21st century feminist lens?

Those were the questions I sought answers to from at least half a dozen relevant people within the Dunedin City Council, University of Otago and Dunedin Burns Club, the organisations involved in the main events and awards celebrating the bard’s life and work (including the annual Burns Suppers, the Robbie Rocks music competition and afore-mentioned Burns poetry competition).

The silence was deafening.

The only response came courtesy of two short official statements, which largely ignored the questions posed. Dunedin Mayor Dave Cull responded on behalf of the council, stating: “We don’t look to Robbie Burns as a way to live our lives, rather we celebrate his poetry, the influence his works had on Dunedin’s rich history, and the reminder of our city’s proud Scottish heritage.”

A University of Otago spokeswoman said of its administration of the Burns fellowship: “The fellowship was an investment from local donors committed to the importance of supporting the development of literary culture. It has been running for almost 60 years with great success.”

It seems the city is standing – quietly – by its man. But the reluctance to discuss the issue at any length or depth is perplexing for a university charged with being the “critic and conscience of society”, and hardly seems befitting of a Unesco City of Literature. If the personal issues are complex and controversial and the fondness sits uneasily, why not admit and explore the contradictions? Or do the #MeToo and #Time’sUp movements make any conversation involving even a centuries-old darling too risky?

Columnist Lisa Scott, in a recent Otago Daily Times piece, wondered why Burns was so beloved and wrote that the theme for last month’s Burns Supper, “Burns on the rights of man (and woman)”, was “probably some sort of crime against feminism” given “Burns considered women had the right to be wooed, winkled and abandoned”.

However, she went on to write that: “Burns might have been the archetypal bad boy (and you can bet your bottom dollar I would have fallen for him, he sounds just my type, a scoundrel)”.

Is that the unpalatable, unmentionable and un-PC truth only a few would dare voice: that there’s still plenty of room for a rogue?

The other uncomfortable truth must be, where would it all end if we opened the misogyny floodgates? Do we ban the works of Baxter, Hughes, Donne, Chaucer …?

In the meantime, the Burns statue continues to take up place of honour in the heart of Dunedin. Emma Neale doesn’t want it toppled or replaced – but has an idea for another, additional effigy to a much-loved writer. “I would love it if the city and university combined would fund a beautiful, life-like, respectful statue of Janet Frame,” she says. “She is a local literary hero that I would feel unreserved in honouring.”