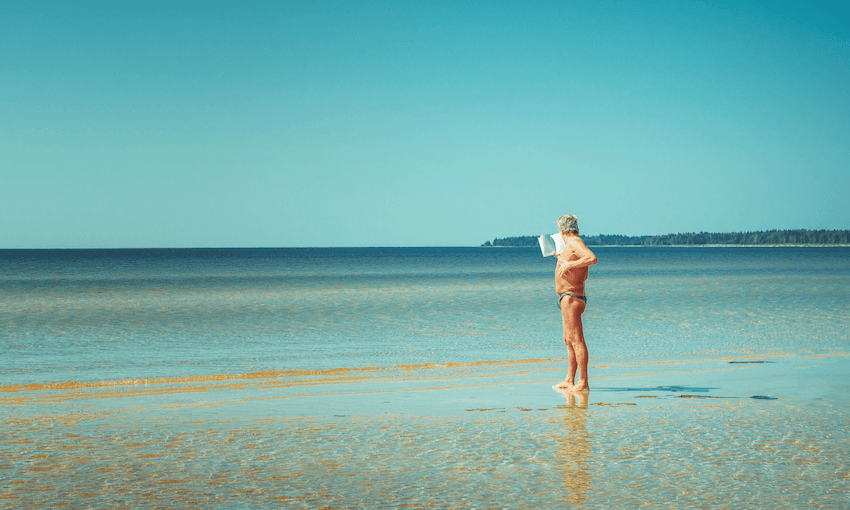 The Unity Books bestseller chart for the week ending January 15

If you’re in any way unsure about Stephen Fry on the classics, please enjoy this interview especially the story about Aphrodite and Paris, beginning at about the two-minute mark.

2  Before the Coffee Gets Cold by Toshikazu Kawaguchi (Picador UK, $20)

Can highly recommend eating a colby cheese and white bread sandwich while watching Ottolenghi make stuffed aubergine in a curry and coconut dal. “The aubergine rolling is kind of therapeutic / fun and chaotic if you have kids helping out!” is a real thing he tweeted.

“The ultimate productivity hack is saying no” – the author’s latest newsletter.

A novel about Shakespeare’s son, who died in high summer in a plague year. Recently named winner of the Women’s Prize for Fiction. O’Farrell told Entertainment Weekly:

“I always felt that Hamnet, the boy, was much too overlooked. He was much too underplayed. He wasn’t given a voice, enough of importance. He’s lucky if he gets maybe two minutes [in a biography]. They mention he was born and then they mention he dies. And often, his death is wrapped up in this statistical analysis of child mortality in the 16th century. It was almost as if the implication is it didn’t really matter that much because everyone lost children or expected to lose children. It’s such an outrageous thing to think. He was 11. How could they not have grieved him?”

Completely unsurprisingly, Auē was the best-selling book of 2020 in both Unity stores.

9  Where the Crawdads Sing by Delia Owens (Corsair HACH, $25)

We bet this is because people are walking into Unity all sunburned and woozy and saying “what’s a good summer read, but not like trash, like a good book, but easy to read, and nothing with an apocalypse please”.

From an interview with the New York Times:

“Mr Obama wrote ‘A Promised Land’ – the first of two volumes about his presidency – much the same way he’s worked on speeches and earlier books. Because he thinks the computer can lend ‘half-baked thoughts the mask of tidiness,’ he writes his first drafts longhand on yellow legal pads; the act of typing it into the computer essentially becomes a first edit. He says he is ‘very particular’ about his pens, always using black Uni-ball Vision Elite rollerball pens with a micro-point, and adds that he tends to do his best writing between 10 p.m. and 2 a.m.: ‘I find that the world narrows, and that is good for my imagination. It’s almost as if there is a darkness all around and there’s a metaphorical beam of light down on the desk, onto the page.'”

3  Aroha: Māori wisdom for a contented life lived in harmony with our planet by Dr Hinemoa Elder (Penguin, $30)

A beautiful little book containing 52 whakataukī – a proverb for every week of the year.

The Paris Review has published Roy’s introduction in full, including this snippet:

“Some of the essays in Azadi: Freedom. Fascism. Fiction. were written through the eyes of a novelist and the universe of her novels. Some of them are about how fiction joins the world and becomes the world. All were written between 2018 and 2020, two years that in India have felt like two hundred. In this time, as the coronavirus pandemic burns through us, our world is passing through a portal. We have journeyed to a place from which it looks unlikely that we can return, at least not without some kind of serious rupture with the past – social, political, economic, and ideological.

Hopefully, some of these essays, written before the pandemic came upon us, will go some small way toward helping us negotiate the rupture. Or, if nothing else, a moment in history that was recorded by a writer, like a metaphorical runway before the aircraft we’re all in took off for an unknown destination. A matter of academic interest for future historians.”

“Hypnotises you with wonder, and then hammers you with heartbreak” – the Washington Post

” … the British writer … pursues the subsurface evidence of today’s major environmental changes, following what trickles down into the Earth and what migrates upward from beneath. This plunge beneath the planet’s topsoil into caves, catacombs, sinkholes, mines, meltwater moulins, and whirlpools opens new terrain to a naturalist whose adventures before now have soared skyward and reached outward.” – The Atlantic

10 The Vanishing Half by Brit Bennett (Dialogue Books, $35)

She wrote The Mothers, of course, but you may also remember Bennett’s 2014 essay for Jezebel, ‘I don’t know what to do with good white people’:

“Over the past two weeks, I’ve seen good white people congratulate themselves for deleting racist friends or debating family members or performing small acts of kindness to Black people. Sometimes I think I’d prefer racist trolling to this grade of self-aggrandizement. A racist troll is easy to dismiss. He does not think decency is enough. Sometimes I think good white people expect to be rewarded for their decency. We are not like those other white people. See how enlightened and aware we are? See how we are good?”