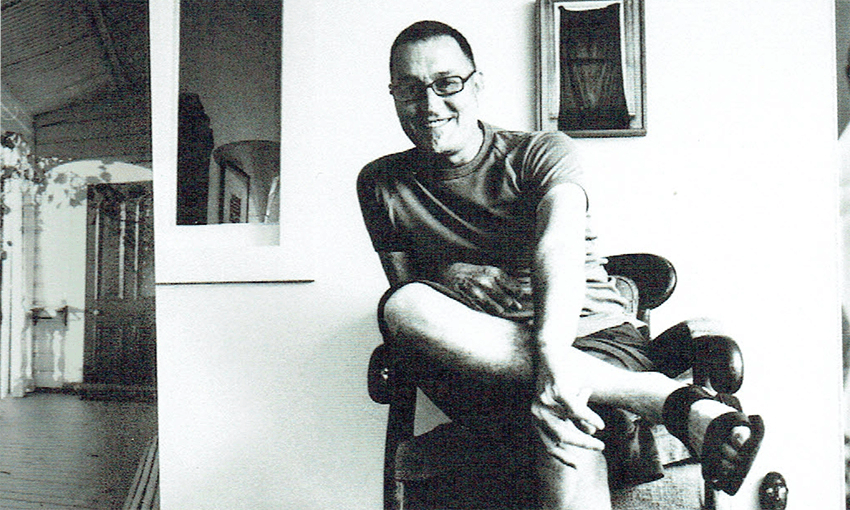 In what’s thought to be the last piece of writing Peter Wells completed before he died, he wonders about his great-grandfather, and the locket he wore all his life.

‘The Story of a Locket’ is published in part here, and features in the extraordinary collection of essays Queer Objects, released this week by Otago University Press.

A locket is a kind of link: a memory link, possibly a love link. It is not unusual for a locket to open and reveal a lover’s face. A locket can contain a lock of the loved one’s hair. It is personal, intimate, secret. A locket is, at the same time, a public piece of jewellery, a kind of proclamation. It asserts something. It speaks of a connection, maybe a private connection but one that can be commented on. Otherwise why wear something so intimate in public?

These thoughts are prompted by a locket I eventually inherited from my mother’s grandfather, one William Purvis. I never met my great-grandfather. He was born in 1850 in Scotland, on the Borders. I was born a century later, so I missed my long-lived ancestor by eight short years. His locket is made of 18-carat rose gold, hinged at the side. One of the things that makes it attractive or unusual is the fact that the glass covering the images is crystal. This gives the locket a glassy allure. It has a sheen of magic. Interestingly, it also makes it hard to see what you are looking at. You have to angle it just so in order to make out the two faces. And the really interesting thing is that the locket shows two men. On one side is my handsome great-grandfather, beard bristling, aquiline-nosed, a fine figure of a man, even with his curl of auburn hair. On the other side of the locket is a younger man who appears to represent another generation. He wears a drooping Edwardian moustache and his looks are fresh. Perhaps the fact that his face is in profile also adds to his mystery. What is he looking at?

When I asked my mother about the story of the locket, she shrugged as if I were obtuse. ‘Oh,’ she said in her special faraway voice in which she seemed to vanish into an entirely satisfactory past from which I was forever excluded: ‘Oh, that was a man Grandpa rescued when his balloon went down in a swamp. Grandpa saved his life and the man gave Grandpa the locket.’ The story was complete in her eyes, self-evidentially true. Who was he? What was his name? Where did this happen? When did this happen? My mother shrugged. ‘I never thought to ask; well, you don’t when you’re young, do you?’ she said, overlooking my youthful face and the quiet passion behind my enquiry. In the end, in answer to my repeated questions, she said she thought the incident had happened at Takapau in southern Hawke’s Bay, where William had worked when he first arrived in New Zealand. He was an indentured immigrant and had to go where he was told.

It was many years before my hands closed around the locket, feeling its weight on my palm. It was mine at last. When I opened it I realised the men stood back to back, so to speak, looking out at the world. They might have been soldiers guarding each other’s back. What is the truth in the story? In my mind’s eye I see the hot air balloon skimming closer to the ground. It is dusk. It is getting cold. The balloon rises, skims, drifts, then suddenly starts to plummet. I am unsure of the spatial relationship of William to the man in the balloon. But what matters is that when the balloon collapses in the swamp – when the balloonist feels only terror and loss – there is someone there, running towards him, a guiding voice, a helping hand, someone who can extricate him, free him from a deathly harness, get him away from the clutch of cold mud and a long slow death by exposure.

I do not know what happens in the space between the incident and the gift of the locket. The men never meet again. They stay in touch. They meet in secret. Or – the locket is given and that is the end of it. But the man gives William his photograph so William will always remember him. And William will always wear the locket on his watch chain, the chain he secretly knows is not gold. And the locket displays the faces of two handsome men who, in a life and death emergency, found each another. He will wear the locket all his life.