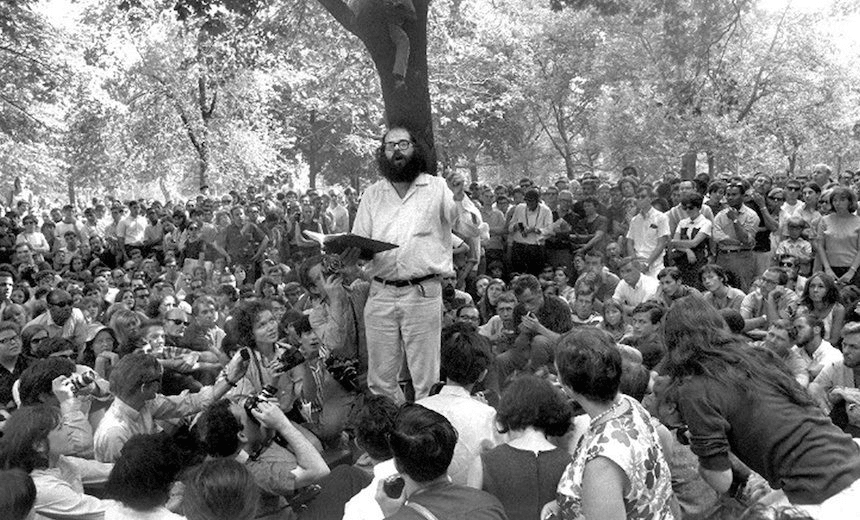 Book of the week: The life of starving hysterical naked Allen Ginsberg

By David Eggleton
Guest writer
Made possible by

David Eggleton surveys the life and times of the one and only Allen Ginsberg – the manic and delirious poet who dedicated himself to “writing down newspaper headlines from Mars”.

Allen Ginsberg was born in 1926, the same year as James K Baxter, and just as Baxter rapidly became New Zealand’s best-known and most prolific poet, as well as reformist-minded, so too was Ginsberg loquacious and astoundingly prolific: writing letters, keeping journals, typing poems, conversing with all and sundry, and constantly on the road giving readings. By the time of his death in 1997, he had been the most famous poet in the United States for decades: an instantly recognisable all-American caricature, hyperbolic in every way. With his great bald dome and bushy beard and eyes goggling behind thick lenses (he suffered from Bell’s Palsy), he became his own Mount Rushmore monument: a mantra-chanting spirit-in-the-sky, a logorrheic seer, a pre-fabricated beatnik with bells on.

His legend began with “Howl”, first published in 1956, and now generally recognised as one of the greatest 20th century long poems in the English language. Ginsberg later said: “I thought I would just write what I wanted to, so the whole first section [was] typed out madly in one afternoon, a huge sad comedy of wild phrasing, meaningless images for the beauty of abstract poetry of the mind running along making awkward combinations like Charlie Chaplin’s walk, long saxophone-like chorus lines I knew [Jack] Kerouac would hear sound of — taking off from his own inspired prose line really a new poetry.”

Ginsberg wilfully created a poem-manifesto for the Beat Generation. “Howl” expresses alienation and disaffection from mainstream society and elects as a band of saints the rejected, the deviant, the criminal, the insane. From early on Ginsberg had identified himself with Prince Myshkin, Dostyoevsky’s sainted ‘fool’ in the novel The Idiot. The Beats initially coalesced round the trinity of Ginsberg, Jack Kerouac and William Burroughs — who first met as students in New York City in the 1940s. They were, with their general ineptness in practical matters, and their outlandish ideas about promiscuity, homosexuality, drug use and shared possessions, a gaggle of self-described “holy fools”. Post-World War II Greenwich Village bohemians, their bourgeoning radicalism and assertion of personal freedoms at a time of rigid social conformity foreshadowed the intellectual climate change of the Sixties: the Beats begat the hippies and international youth radicalism.

The Beats espoused the virtues of poverty, of non-Christian spiritual values, of utopian socialism. “Beat” meant tired, worn-out, worthless, but it also implied the exciting thrum of the automobile’s internal combustion engine, and the rhythmic pulse of jazz and the blues. Jack Kerouac claimed that Beat stood for Beatitude, or the state of being blessed, being holy. For the mass media, though, aided and abetted by hostile conservative literary critics who attacked the Beats for their “unmitigated, stupid, ignorant, ill-willed, inept vanity”, they were figures of fun or unsympathetic curiosity.

In his massive doorstop of a book, Dharma Lion: a biography of Allen Ginsberg, Michael Schumacher outlines the conformist atmosphere of the times, the “tranquillised” Fifties, as Robert Lowell called them, when American culture was essentially hierarchical, with “squares” and “highbrows” controlling the value system. Decorum ruled. Other poets of the era were confessional, but in a private, hermetic, almost secretive way. Ginsberg was the opposite. Writing in the epic epistolary mode of self-analysis promulgated by WH Auden, Ginsberg made the confessional poem a form of exhibitionism, a primal howl, and ran with it like a streaker across the arena of public opinion.

Ginsberg first read “Howl” in public in San Francisco at the Six Gallery in 1955, and this was his first public reading ever, because in his home town of New York, cafes had to buy an expensive cabaret license if they wanted to stage public poetry readings. The reading at the Six Gallery has become the stuff of legend: “Jack Kerouac, sitting at the edge of the platform, pounded an accompaniment on a wine jug, shouting Go! at the end of each long line … the crowd [also punctuated] Ginsberg’s lines with shouts of encouragement.” City Lights publisher Lawrence Ferlinghetti sent a telegram to Ginsberg shortly afterwards: “I greet you at the beginning of a great career. When do I get the manuscript?”

Ginsberg’s first book, Howl and other poems, contains some of his best work: “Howl”, “America”, “A Supermarket in California”. Such poems reveal Ginsberg reaching out to seize poetic authority and centrality by remaking the literary conventions. Ginsberg, though, was well-schooled in traditional verse; he chose to write in the American grain, in the spirit of Huck Finn and Walt Whitman — and of Ezra Pound and the Harlem Renaissance poets. He learnt, too, from William Carlos Williams, who told him: “Listen to the rhythm of your own voice. Proceed intuitively by ear.”

Combining nativist poetics, and Buddhist doctrine, and utopian ideals, Ginsberg turned himself into a Bard, one who addressed the People through recited jeremiads that berated social ills and injustices and that looked for solutions in meditation and spiritual connections. He became a poet of the Space Age when inner and outer space still seemed able to be conquered: one individually and spiritually, the other by humankind firing rocketships towards the moon. As he later put it self-mockingly in a poem, “Allen Ginsberg is about confused mind writing down newspaper headlines from Mars.”

Ginsberg’s parents were of Russian-Jewish descent on both sides. He grew up in New Jersey with his brother in a chaotic, socialist, non-religious household. His father was a teacher and published poet, while his mother was a passionate Communist — a left-wing political activist who later developed paranoid schizophrenia, then ended up permanently hospitalised and in the 1950s lobotomised. Ginsberg commemorates her life in the long poem dedicated to her,”Kaddish”.

Himself wild and transgressive, Ginsberg was a brilliant university student who constantly got in trouble with the authorities and with the police, partly through his own idealism; he turned wherever he was living into a crashpad for the genuinely homeless, as well as for deadbeats who were actually petty crooks.

Schumacher elects to tell the Allen Ginsberg story chronologically, but fails to do much to thematically shape the narrative, which is often a Sargasso Sea of incidents: one entangled event after another. Massively researched and end-noted, its exposition is plodding and dogged, and written in a kind of tabloid journalese that flattens out the nuances and emphasises him as a cartoon figure rather than as a Dostoevskian anti-hero.

What this account plays down, even as it promotes Ginsberg as a celebrity figurehead of the 1960s, is just how manically delirious Ginsberg was as the very incarnation of the mind-state of mid-20th century America. Ginsberg was not only an early Gay Liberation activist (recklessly pursuing unlikely liaisons along the way), and an advocate for Black Power as well as Flower Power, he was also a drug shaman channelling visions. Promoting the visionary possibilities of drugs, he freely admitted to sampling all manner of illicit substances, and not only writing about them, but also writing while high on them.

Ginsberg first took LSD in 1959, an early experimenter, and travelled to Latin American to sample drugs found only in the jungle. Jungle brews, peyote juice, psilocybin mushrooms, marijuana, amphetamines were all grist to his writing mill. Later, he became involved in a psychedelic crusade to promote drugs with Timothy Leary. At the same time, he remained sensitive to and empathetic about other people’s capacities to follow him in his experimentation: the possibility that they might end up as acid casualties.

Ginsberg preached “a politics of ecstasy” to those in search of risk and sensation — those on a voyage of self-discovery — in the 60s. Proselytising for radical chic as part of “the Great Freak Forward”, this hirsute Blakean and Biblical Adam inspired the raves of a hundred thousand long-haired hippy poets, as well as the lyrics of the musical Hair. No self-respecting international poetry jamboree, anti-Vietnam War mass demo, or indeed big rock festival was complete without an appearance by Allen Ginsberg, even if it was only to chant “Om” and play his harmonium. Ginsberg at this time claimed writing was like prayer or yogic meditation: he sought “to achieve a state of blissful consciousness so that my language will strike a responsive chord of blissful consciousness from any listener or reader”.

In the 60s Ginsberg became a good friend of Bob Dylan’s, who acknowledged him as a mentor, and he also hung out with John Lennon and the other Beatles and the Rolling Stones and assorted other media figures of the era, and various politicians consulted him about government drug policy. At times, Schumacher’s documentation seems exhaustive, as when he delves into the Dylan-Ginsberg relationship for example, but in fact he cannot get all the interconnections in, nor capture with finesse the changing nature of various relationships. Ginsberg was fantastically and ceaselessly active: founding the Jack Kerouac School of Disembodied School of Poetics, supporting the foundation of a Buddhist university in Boulder, Colorado, campaigning to defend freedom of expression, teaching poetry courses at various universities, making recordings, touring as part of Bob Dylan’s Rolling Thunder Revue in the 1970s. Then there are the encounters with esteemed literary figures, including a revealing account of Ginsberg’s patient skill in getting the famously taciturn Ezra Pound to talk to him in Venice in 1965.

Ginsberg was a multifarious figure — like Walt Whitman, he “contained multitudes” — who at his best successfully channelled a driving, twitchy energy into memorable language. His was a celebration of public joy: he answered to a need for spiritual sustenance with his own spiritual comedy. He sought, and in a way obtained, a kind of performance poetry sublime enough to change the national will and raise up the consciousness of the populace. His rich legacy remains, both in the meaning of his activism and in his verse.