My boy is called Ben and he turns seven in October. In the battle over how kids learn to read, he is a data point of one. But he is my data point of one, and as he’d tell you, did you know that one can also be a whole?

So: Ben. He is kind and goofy and emotionally intelligent, and absolutely hellbent on rules. He adores puns. Pokemon. Making up raps. Mazes, logic. When he left kindy his kaiako said, “He’ll do great. Just maybe tell his teacher that Ben is very literal.” At the moment he is fascinated by Guinness World Records, and anything that spins.

Before Ben hit school he was manipulating fractions in his head, for fun. I remember the day he realised there were negative numbers – a new world, stretching infinitely down; he actually pirouetted with the joy of it. He likes to shoot equations at us, ones he’s already figured out: what’s 20 times 20 plus 200 minus 700? He’ll whirl in the kitchen while he delivers these chants, punctuating each step with a sweet kung fu move. He counts himself to sleep. The other day, exhausted, self-soothing with maths, he woozily dealt with 37 times 12 as we drove to the supermarket.

So it went with words. Ben started talking hard and fast on his first birthday. All the way through Playcentre, then daycare and kindy, he was precocious, voracious, collecting up words and stacking them into meticulous, towering sentences. No baby talk. No stumbling over tenses.

I’d assumed my boy would be one of those kids who pick up reading simply by being around books. Who was born to it. But what happened was he hit school and abruptly plateaued.

I was an education reporter for 10 years and I wrote many, many versions of the story that goes: “If you read to your kids and instil a love of books you’re doing all you can to set them up to be great readers”. Also the one that goes: “Parents: stop fretting. Your white middle-class kid will be just fine”. And yet.

Every afternoon he’d dig out his book bag and we’d sit down with whatever book had been sent home. He’d rattle through it no worries. But one day he explained that he’d already read the book in class. He’d memorised it. Same with the picture books all over the house. He would sit down and “read” to his baby sister, and the sweetness of it would break your heart. But he wasn’t reading. He was reciting. 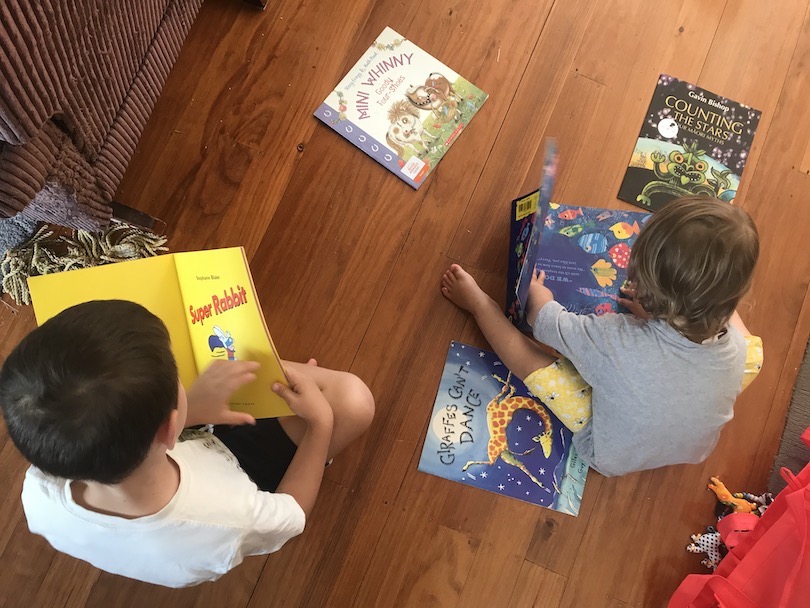 I want to say here that the sheer volume of material this kid memorised was staggering. So was his ability to figure out what words must mean, by looking at the pictures. And all of that amazing brain gruntwork, that rote learning and jigsaw-puzzling – it all looks like reading, for a while.

For us, his whole first year of school was an exercise in being very worried while trying very hard not to be. From somewhere, from everywhere, we had absorbed the idea that New Zealand is blessed with a chill and child-centred approach to learning to read. We were into it. The whole thing seemed at once sensible and kind of magical: put a child in a reading-rich environment and their own reading will eventually kind of … manifest. Oh sure he’d get taught the basics, plus a few tricks – look for clues in the picture, break a big word into chunks. But mostly it was about osmosis. Trust the teachers, the system, trust in the sight word charts and reading books they send home. Relax.

This all fit nicely with the ECE curriculum, Te Whāriki, that we’d just spent five years wrapped up in. It also fit with our ideas about parenting, which are basically: Reinforce the good stuff, ignore the bad. Read lots.

So we did our best not to freak out. Occasionally we’d talk with Ben’s teacher. She was lovely, capable, smart, she tried to reassure us, told us Ben was doing fine, making good progress. We wanted to see that. But what we saw instead – this is hard to pin down – was our diligent, eager-to-please kid using all his energy just in staying afloat. We saw a light going out. After the first few months there was no joy for him in reading or, more precisely, in battling to read. He was another little boy deciding books weren’t for him.

It became a slog. My mum, a former primary school teacher who later specialised in literacy, came up with all sorts of sticker charts and word games to try to fire him up again. Nothing worked for long.

He didn’t like writing, either. More often than not, everything he wrote would be mirrored, flipped. It was extraordinary to watch. Once he made a card for his sister. Dear Leo, Love Ben. He copied words I’d written. It took him 20 minutes. I couldn’t tell him that every letter, and every word, was the wrong way around. I just marvelled at his brain, and I worried.

But mirroring is not unusual when kids are starting to read. It might signal dyslexia. It might not. It’ll sort itself out. Relax. 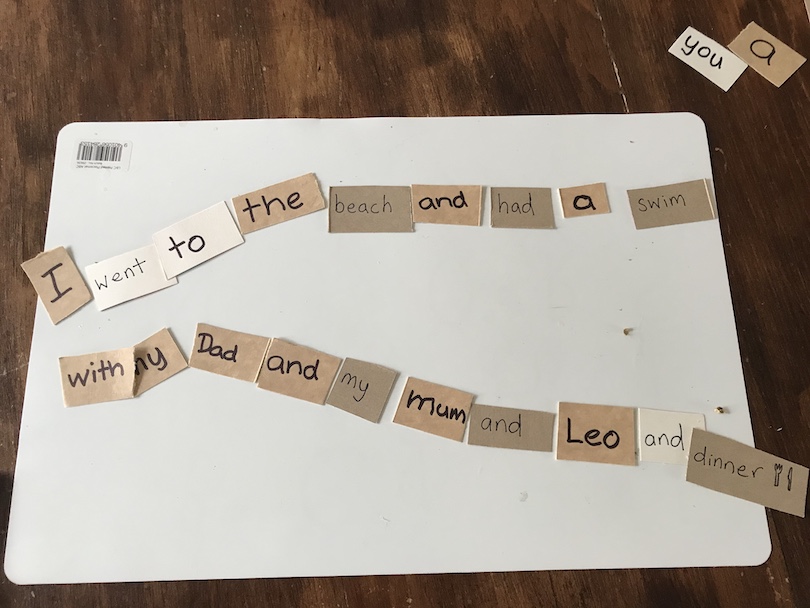 “Caterpillar sentences”, one of the many strategies we tried at home (Photo: Catherine Woulfe)

At Ben’s sixth birthday party, when he’d been at school for a year, I set up a treasure hunt with simple written clues. Most of the words were ones we had drilled, ones I thought he knew. “You look in me every day.” “I am big and red. Bees love me.” There were 12 clues. So 12 times over, I watched my boy stand mute at the back of the pack while his friends read out the note in two seconds flat. Letterbox, he’d yell then, first to solve the riddle, tearing off down the drive. Bottlebrush!

It is a hard thing to watch your kid learn to mask, to compensate. That day, the worry finally rose up and shouted down all the magical thinking.

That’s when we found him a ladder.

A structured literacy approach explicitly teaches systematic word identification and decoding strategies, which benefit most students but are essential for those with dyslexia.

[Teachers using a structured literacy approach will] explain each concept clearly. Provide guided practice. Students are not expected to discover or intuit language concepts simply from exposure to language or reading.

“Explain each concept clearly.” I reckon that’s the heart of it.

Instead of seeking a diagnosis we set about organising a tutor. Here is what you’ll need in your privilege toolkit to make this option feasible: money; networks (finding a tutor can be tough); the educational capital to realise there’s a problem in the first place and the bloodymindedness to refuse to relax about it. You’ll also need a parent or other adult with time and flexibility, who knows enough about reading to be able to help.

In six months we have spent more than $1000 on private tutoring. I’ve taken Ben to something like 13 hours of lessons, most of them at 7.30am, and almost every afternoon we practice with special games and apps and decodable books (crucially, in these books kids can sound out all the words, rather than having to guess).

It worked. As soon as someone told Ben the rules, the patterns – the beautiful maths of reading – he got it.

Here’s the first structured literacy book he read, in its entirety. I look at it now and I see a poem. A ladder.

Twelve words. He read them all and it was a tiny triumph, our first in a really long time. You should’ve seen his face.

Here are the first two pages of the book we did yesterday:

The sun was out and the bees were buzzing.

Pip and Tim were playing in the long grass.

It is still a triumph, every single time.

More and more schools are introducing the structured literacy approach, even though they have to pay to do so. Over the last couple of weeks the Ministry of Education has also been distributing new books that focus on phonics, one of the pillars of the system. Professional development for teachers is on the way.

I’m relieved that change is happening, and also that it is happening by degrees. Things have a way of shattering when new systems are slammed down on schools. And of all the wars in education, the one over how we learn to read is perhaps the most bitter. Godspeed to the teachers and officials – and kids – picking their way through it all.

But honestly, it all feels very far away and across the hills. Because right here at home our boy is off and racing, he’s flying – a week ago he woke up and some switch had flicked and all of a sudden he was reading the Weetbix box, the milk bottle, the sunscreen. I cried buckets in the kitchen while he did a lap of his room, reading the certificates on the wall. Ss-tah-rrr of the week. For being ka-i-nn-d and tah-ry-ing his bah-es-t with his ill-err-nn-ing. A trip to the fruit and vege shop took half an hour longer than usual. Mummy! There are so many signs! Later I found him transfixed in front of the turned-off TV. Pa-nah-soh-nic, he breathed, not noticing me. And then he grabbed a book he had never seen before and sat down beside his sister.