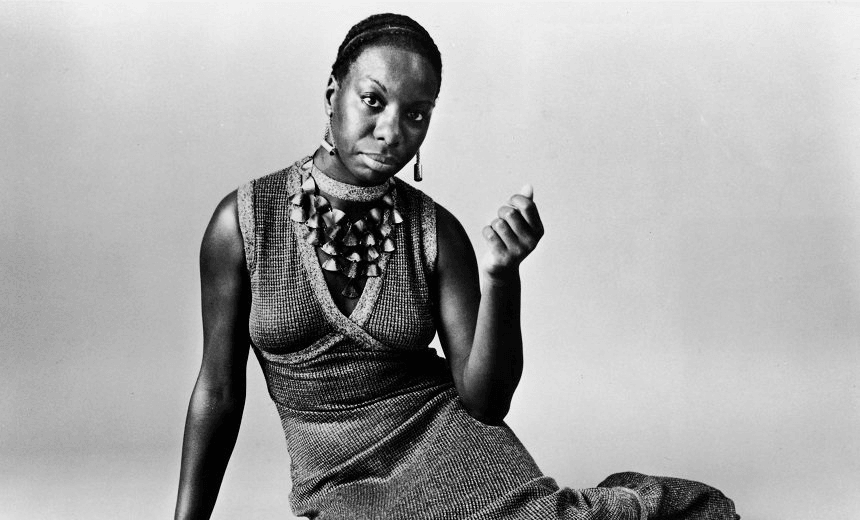 UNSPECIFIED – 1968: This studio portrait shows American pianist and jazz singer Nina Simone reclining on the floor circa 1968. Simone, whose deep, raspy voice made her a unique jazz figure and later helped chronicle the civil rights movement, died in her sleep on April 21, 2003 of natural causes after a long illness. She was 70. (Photo by Getty Images)

By Nick Bollinger
Guest writer
Made possible by

UNSPECIFIED – 1968: This studio portrait shows American pianist and jazz singer Nina Simone reclining on the floor circa 1968. Simone, whose deep, raspy voice made her a unique jazz figure and later helped chronicle the civil rights movement, died in her sleep on April 21, 2003 of natural causes after a long illness. She was 70. (Photo by Getty Images)

If music is some kind of social barometer, then America is brewing a civil war. It would be hard to find a significant hip-hop or R&B record in the past year that hasn’t raised its voice in anger at the racism that, 150 years on from slavery, sees a disproportionate number of black Americans in poverty, prisons or dying at the hands of police.

But one African-American artist had already reached this point more than half a century ago. Listen to Nina Simone’s 1964 “Mississippi Goddam” and you’ll hear a foreshadowing of hip-hop’s rage. Working against the melody’s almost show-tune jauntiness, she curses, rhymes and prophesises. “This whole country is full of lies/you’re all gonna die, and die like flies”.

Back then, Simone felt like she was the only black singer fighting the American system. If that wasn’t strictly true, her songs were certainly much more direct and brutal than the hopeful pleas of Curtis Mayfield’s “People Get Ready” or Sam Cooke’s “A Change Is Gonna Come” that typified the black pop of the era.

Racism galvanised Simone and her music throughout her life, though it would be simplistic to say it was all that fuelled her anger and artistry. She was complicated and easily misunderstood. Alan Light’s biography What Happened, Miss Simonne? attempts an understanding.

Though Simone has been the subject of earlier biographies and even an autobiography (messily cobbled together from the efforts of four ghostwriters), Light’s book stands out for its scrupulousness, its sober tone, and access to previously unpublished material, including Simone’s own diaries.

The young Nina – then known by birth name Eunice Waymon – was by all accounts a prodigy. One piece of folklore has her reading music at six months. As a schoolgirl in North Carolina she set her sights on a career as a concert pianist. Her white piano teacher Miss Mazzanovich recognised her talent and encouraged her, but her childhood was still soured with bitter experiences. At age 10 she was invited to give a recital in the local library. When her parents, seated proudly in the front row, were asked to move to the back to make room for white audience members, Eunice refused to perform. Eventually she did play but only once she was satisfied the injustice had been redressed.

Later, when she failed to gain entry to Curtis University, she was convinced it was because she was black. The rejection marked the collapse of her classical ambitions. By now she was living in Philadelphia and the need to make a living forced her into popular music. In the bars and clubs of Atlantic City, Waymon developed her unique synthesis of popular song, classical technique, gospel and blues, and Nina Simone was born.

She could electrify an audience. As she explained it: “It’s like when lightning strikes a town, or a hurricane or a tornado, it builds. If it’s getting ready to capture or to hurt thousands of people, it comes stronger as it goes through the oceans and the waves get bigger – it gets stronger all the time, because it’s been building wave by wave by wave all that time. That’s the way I think of myself.”

She retained from the classical world the idea that an audience – black or white – owed the artist respect. She once told an inattentive black crowd to “go home, take a bath, use underarm deodorant, that’s how you get civil rights.”

Nina believed in civil rights, by any means necessary. She admired Martin Luther King, yet the first time they met she told him: “I’m not nonviolent.” Anthems she composed such as “Mississippi Goddam”, “Backlash Blues” and “Young Gifted and Black” fixed her in people’s minds as a protest singer, though she was resentful at the way this reputation marginalised her in the marketplace, noting that Bob Dylan – a white man – could sing about racism and enjoy widespread acceptance where she couldn’t.

Disgusted with America, she began to spend much of her time elsewhere. Her manner was regal, and she was greeted accordingly. She maintained a long-running relationship with the Prime Minister of Barbados. In Liberia, she was wooed – aptly enough – by the Minister of Foreign Affairs.

At some point she began to develop a reputation for erratic behaviour, off stage and on. She had a ghastly falling out with her dying father, to whom she had always been particularly close.

There’s a film of her 1976 performance at the Montreux Jazz Festival that is disturbing to watch, yet impossible to turn away from. The performance is punctuated with pauses, during which she chastises the audience for various offenses, imagined or otherwise. At one point she asks if David Bowie is in the audience, and is reluctant to continue unless his presence is confirmed.

Before launching into the encore – a medley of Janis Ian’s “Stars” and Morris Albert’s “Feelings” she inhabits so fully it’s hard to believe she didn’t write them or that anyone else ever sang them – she announces cryptically that she hopes the audience “will see me, see this spirit, on another plane very soon now.” She shows off a 200-year-old necklace, and commands a restive punter to sit down. Even once the music starts, she will frequently depart from the song to pursue some thought that has just flown into her mind. At one point she begins to talk like Hal, the robot from 2001. Her shining dark face, held in close-up for much of the performance, expresses both imperiousness and terror.

Light seems in no doubt that Simone suffered from some unspecified form of mental illness. But might the insane racism she had lived with all her life account for at least some of her behaviour? Black artists before her had found different ways of dealing with it. Saxophonist Dexter Gordon went to live in Europe where he didn’t have to put up with mad prejudice. Sun Ra (born Herman Blount in Alabama, 1914) concluded that since human beings treated each other so badly – especially in America – he had to be from somewhere else entirely. “I’m from Saturn,” he’d say.

As it turned out, Bowie wasn’t in the audience that night in Montreux, but he had made Simone’s acquaintance not long before and the pair hit it off. “The first thing I want you to know,” he told her when they met, “is you’re not crazy. What’s wrong with you is you were gifted.”

What Happened Miss Simone? A Biography (Cannongate, $37) by Alan Light is available at Unity Books.