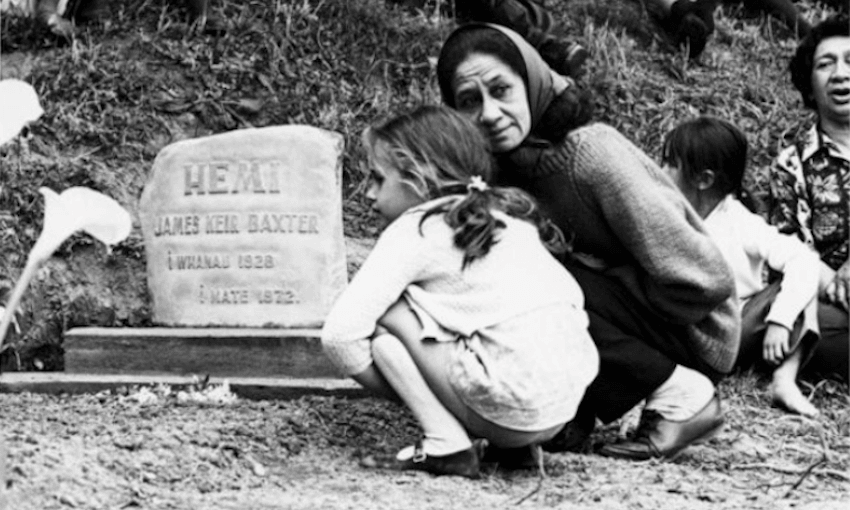 Jacquie Baxter and Stephanie at the unveiling of the gravestone of James K Baxter – Photograph taken by a Dominion staff photographer. (Ref: PAColl-2146-002. Alexander Turnbull Library)

Jacquie Baxter and Stephanie at the unveiling of the gravestone of James K Baxter – Photograph taken by a Dominion staff photographer. (Ref: PAColl-2146-002. Alexander Turnbull Library)

All week this week the Spinoff Review of Books celebrates the rich, fascinating history of New Zealand literature. Today: a photo essay on the graves of famous New Zealand writers.

Hone Tuwhare immortalised the tangi of James K Baxter at Jerusalem on October 25, 1972, in his famous poem “Heemi”. It’s a narrative of driving overnight from his home in the Far North, with his son and three hitch-hikers at Ninety Mile Beach, to join the 800 mourners at the cemetery alongside the Whanganui River. Baxter had died three days before in Auckland. He knocked on the door of a stranger’s house. They invited him in, and he lay down. He was 46. Tuwhare’s poem ends

tired old mate in a tent
laid out in a box
with no money in the pocket
no fancy halo, no thump left in the old
ticker.

Katherine Mansfield was buried at Fountainbleau in France on January 12, 1923. She was 34. New Zealand visitors to her grave of Katherine Mansfield at the Cimetiere d’Avon, in Avon, routinely leave paua shells on the smooth grey stone. “Periodically someone will place one on there and periodically they are removed,” emailed Gerri Kimber, chair of the Katherine Mansfield Society, from her office at the University of Northampton. “The society employs someone to keep the grave looking tidy with seasonal flowers…We had a huge ceremony last June, commemorating the fact that KM was going to stay put! It was a ghastly, morbid scheme concocted by the KM Birthplace in Wellington, in conjunction with the Wellington Mayor. I and the society led the campaign against it. KM was a private individual who left NZ as soon as she could. She loved the land of her birth, but would never have gone back there to live. All her siblings apart from one who died as a baby are buried in Europe or Canada.”

In 2014, Jack Tame visited the grave of Man Alone author John Mulgan, who was 43 when he was buried at the Heliopolis military cemetery in Cairo. Tame writes, “Cairo’s a pretty ghastly city. It’s filthy and loud. There’s almost no green space. Out in the city’s North Eastern suburbs, the Heliopolis War Cemetery makes for a bit of an oasis. Order and clean lines. No dog shit. No dust. Rest for the dead in Cairo is reprieve for the living, too.

“I schlepped out on the subway. From the nearest station, it was an hour’s walk to the front gates. The traffic was incessant. Egyptians love a horn.

“But around the corner from a high school were gates in sand-coloured stone. A man clipped at a modest hedge. I flicked through a visitor book and saw that no one had written anything for more than a week. I turned back a couple of pages and turned back 18 months.

“In a greasy, dirty city, here was orderliness and calm. The cemetery was empty of the living but full of 1800 dead. The graves were neat, straight, with the same space between every matching epitaph and a matching shrub at the end of every row. The grass was clipped tight. There were no weeds or bright flowers. In Egypt’s disordered suburbia, an English Garden of death.

“An assistant at the cemetery, delighted for the company, helped me find Mulgan’s grave. His was just like all the others, right down the end of a row. I sat on the grass, glad for a rest, and drank a Coke while I read the inscription. Some grim-looking apartment buildings grew over the nearby fence.

“My guess is the Commonwealth War Graves Commission doesn’t care for personal touches. Mulgan’s grave didn’t mention his penmanship, his wife, his son, or his home. It also didn’t mention that his death came by his own hand. Mulgan died on Anzac Day, 1945, two days before Mussolini died and four days before Hitler. I rested at his grave and then walked down the road, where a sweating man fried balls of falafel in an old 44-gallon drum.”

Ronald Hugh Morrieson, author of the provincial noir masterpieces The Scarecrow and Pallet on the Floor, lived his entire life in Hawera. Another Hawera writer, Rhonda Bartle, has a useful biography of him online at the New Plymouth musuem and art gallery, Puke Ariki. It concludes, “Maurice Shadbolt, who once described Morrieson as ‘a bulky, likeable man of large enthusiasms, a heavy drinker and big eater,’ visited in 1972 and found him ‘a shadow of the man I first saw in 1966.’  Distraught from the death of his mother which he never got over, ‘he had been drinking, solitary, until two in the morning and was putting away a bottle or two of sherry before lunch.’ In fact, the writer had taken to ordering six flagons of beer and a bottle of whiskey a day.  And it was this kind of drinking that would ultimately do him in.

“Ronald Hugh Morrieson died on Boxing Day 1972 after a long Christmas Day session. Though he’d been in and out of hospital over the last three years due to a heart condition, cirrhosis of the liver and various other complaints, the cause of death was put down to alcoholic hepatitis.” He was 50.

Jacquie Sturm (the widow of James K Baxter) and Stephanie Baxter (the poet’s granddaughter) were at the unveiling of his gravestone at Jerusalem, a year after his death. Baxter’s last known poem, “A Pair of Sandals”, written on the wall of a friend’s house, begins

A pair of sandals, old black pants
And leather coat — I must go, my friends,
Into the dark, the cold…