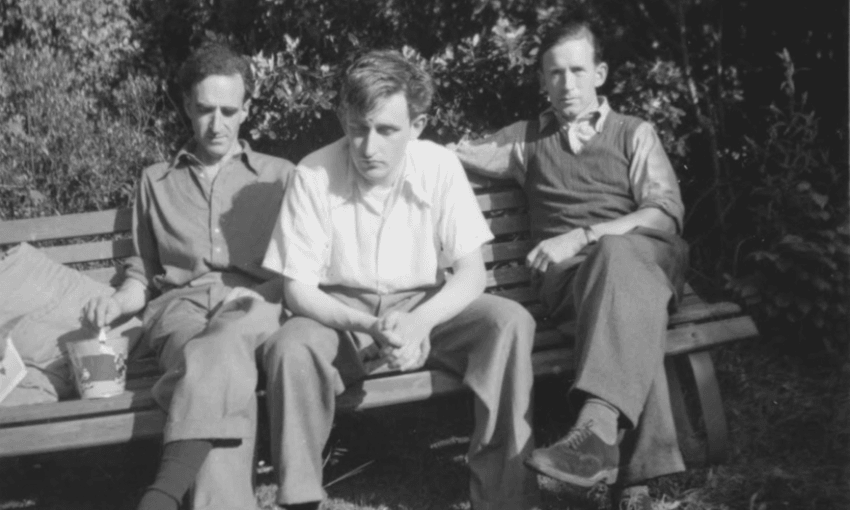 The Monday Extract: The secret diary of Charles Brasch

He viewed Greymouth as “sub-human”, rather wished James K Baxter would STFU, and regarded the poetry of “plump and round” Bill Manhire as “promising”. A new book shares the 1968 diary of Landfall founder Charles Brasch.

Jim [Baxter] talks so continuously because he is driven all the time by his need to put his thoughts into words; in part, to make them clear to himself (I think he is less concerned about his listener), and partly as a stage towards writing. As we sat in the sun at Goat Island Beach he hardly ceased; he talked while driving there – so quietly I could barely hear at times above the noise of the engine; he might have gone on even if I’d fallen asleep.

Perhaps he doesn’t need response – and I made very little, most of the time, being drugged by the heat & brilliance of the day. Although he seems not to notice his surroundings, he must absorb them through his pores – scenes, people, atmosphere.

Jim B. came in for a long talk about his present life and his future. Women set the pattern in most marriages; he submitted, more or less, for the first ten years of his own marriage; now, partly to save the marriage, partly because of his own need for change, he wants to go north next year & live in a small Maori community on the upper Wanganui river – to get a small piece of land & live on it, where he hopes J[acquie] will join him.

He thinks the children no longer need him; Hilary certainly not, & John – well, John can always join him. Hilary is having a child later this year and will not keep it – too difficult, although Jim would have liked her to keep it. Having gone through this she will perhaps begin to settle down, or so he seemed to imply. He himself seems to need to undergo constant transformations; this may then be an inevitable move for him.

He wanted to talk about it to make it clear to himself, possibly….He said he had not discussed the matter fully with anyone else, & asked me to keep it to myself. He has never talked to me about his private affairs so fully before.

When I am writing, I think myself a poet; at other times, I do not know. Nor can I follow the movements of the tide within me according to which – it seems – I am able to write or not; at present I feel it to be sunk far away. Yet it might flood in again tomorrow.

Gordon Collier and Bill Manhire plan a literary magazine, to start next April & come out three times a year. Bill has written some verse which seems promising…

Bill does not say No thank you, or I’ve had enough, or I don’t want to, but always I’m right. A tallish strongly built fellow, his face plump & rounded & unlined as if still fat with milk, looking scarcely more than 17 although he must be 20 or over. Gordon is lean & keen & smiling, black-haired, wearing black horn-rimmed glasses, & looks adult, mature. Both pale-skinned.

Greymouth. Great comfort of staying with Toss & Edith [Woollaston]. Almost a holiday from self.

Bare twisty willow in the rain hung with glass-white water drops, like a chandelier. Meyer & Lisbon lemon trees bearing well. Violets & daffodils in flower, a magnolia stellata, brown wallflower, all earlier than Dunedin. T & E are so necessary to each other that he does not like to leave her for longer than a fortnight. Both chatter like small streams, sometimes each addressing me independently & paying scant attention to the other; or they argue & bicker quietly, a kind of rallying, without heat.

How to describe Greymouth – poor, sodden, down-at-heel, stained as if tear-stained by the persistent rain; as if it could hardly lift its head from the ground, from its own low-spirited hopelessness & the meanness of its life. It is ready to sink back into the earth & drown in green vegetation. It seems only sub-human; smoke-grimed & grey.

Saying goodbye to…Janet F[rame], who is going to America again for a few months, first to spend some time with [John and Sue] Marquand at their summer house in the Bahamas, near Nassau, then to the writers’ colony at Yaddo, where she stayed before & found she could work well, with only half-a-dozen or so other people there.

She is going with mixed feelings – felt she could not refuse the invitation, should not refuse it, but doesn’t like travelling, feels apprehensive about the States in winter and also at so unsettled a time, and doesn’t want to leave Dunedin & her house, where she’s content & can work. She has let her house to a young couple who are just getting married, but is locking one room with her books & papers.

The Baxters too are about to leave Dunedin. Jim is going alone to a Maori settlement on the upper Wanganui, Jacquie returning to their house in Wellington with Hilary & her baby & John.

He talks all the time as if his marriage was in a desperate state – almost as if it were something independent of himself & Jacquie; & he keeps referring to it in public, very embarrassingly – he’s not embarrassed, but I am, and Jacquie must be. Jacquie (he told me) foresees their life going on quietly much like other people’s, as a part of society, and he can’t face this, won’t submit to it.

But doesn’t every writer & artist face this in middle age? and hasn’t he then to pursue his work & make something good of his life just in these conditions, as for instance Milton, Goethe, Tennyson, Joyce all did?

Jim looks quietly desperate whenever I see him now – he greets you & he talks as always, but he seems far away too, sunk very deep in himself, too preoccupied to be anything but solemn & humourless. He looks grey; partly because he’s usually unshaven, his hair rough, his clothes as if they’d been slept in, drab jacket, drab shirt open at the neck now; & the skin round his eyes has gone dark & rough.

These edited excerpts are taken from Charles Brasch Journals 1958–1973 edited by Peter Simpson (Otago University Press, $59.95), the third and final volume of journals kept by the great founding editor of Landfall. The journals are available at Unity Books.