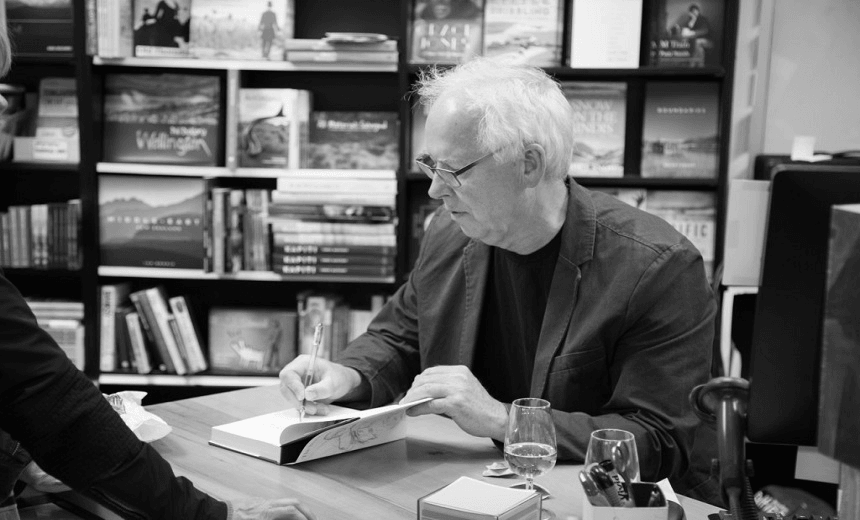 Books: The Year of Bill Manhire

By Bill Manhire
Guest writer
Made possible by

Bill Manhire’s 2015: a sandwich in Norwich, Utopia, ‘festivals of ideas’, poems in an eggbox, no sleep till Gore, The Stories of Bill Manhire, ‘a fine, chubby baby’.

I spent the early months of the year as the UNESCO Visiting Professor of Creative Writing at the University of East Anglia , sandwiched between Margaret Atwood and Ian Rankin. The position was set up jointly by UEA and the Writers’ Centre Norwich, to mark Norwich’s designation as a UNESCO City of Literature – something for Dunedin to think about, maybe.

There were a couple of incidental pleasures in Norwich. One was the Sainsbury Centre for the Visual Arts on the UEA campus, which I hadn’t known about, and which has wonderful displays of small treasures, including some from the South Pacific .

The second was my luck in getting to Utopia just in time – Thomas More’s Utopia, that is, which was painted, every single word, on a condemned riverside building back in 2006. I think demolition is underway just about now.

Among a bunch of other UK poetry things, I had the great good fortune to go to StAnza, the impressive Scottish poetry festival that takes place each year in St Andrews. As New Zealand’s literary festivals turn more and more into festivals of ideas, I’m beginning to think we could do with something like it here.

Later in the year, and back in New Zealand, I went on a couple of mini Chamber Music tours with Norman Meehan and Hannah Griffin – one in the deep south (Wanaka, Cromwell, Gore) and one in the north (Auckland, Warkworth, Whangarei). Down south, it was very satisfying to hear Hannah sing Making Baby Float in the various localities it points to. During the northern tour, the album Small Holes in the Silence was launched courtesy of the Auckland jazz festival.

And then in November, thanks almost entirely to the prompting and shepherding of VUP publisher Fergus Barrowman, The Stories of Bill Manhire entered the world. Fergus had the inspired idea of adding the essay Under the Influence to the book as a kind of tailpiece – thus setting up a conversation between the ‘real’ world and the imagined (and mostly satirical) world which is there in the stories.

There was a launch for the book at Unity in Wellington, Damien Wilkins said some very nice things in his launch speech and all in all I felt very happy. The book has a lovely cover-drawing by the late Peter Campbell of a fine, chubby baby – which is probably why I sometimes feel the need to pick it up and cuddle it.

The Stories of Bill Manhire, a fixture in the best-seller list ever since it was published, is available at Unity Books.