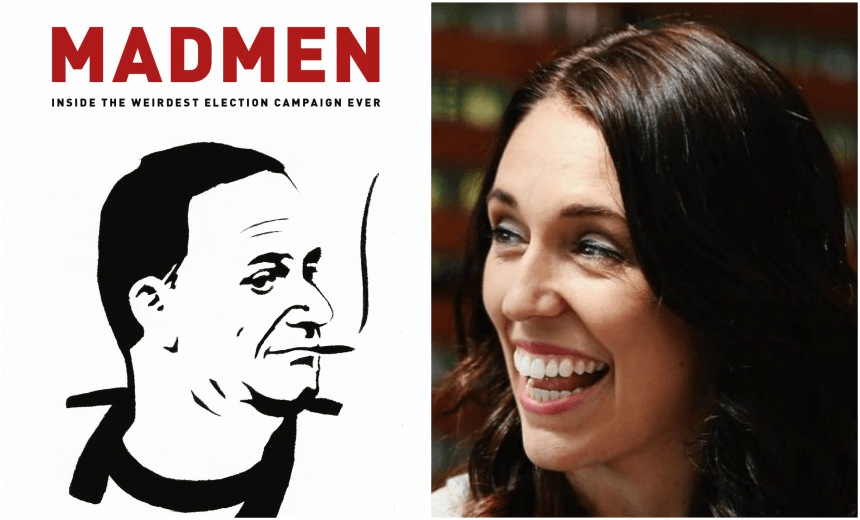 Steve Braunias asks: is there a book to be written about the 2017 election campaign?

As an author, publisher, and relentless self-publicist, I’m always on high-alert for whatever ideas that enter the dark, hollow chamber of my head and might form the basis for my next book. I’m committed to a couple of book projects at the moment but both are down the track, one to fulfil my two-book contract with HarperCollins, another for my vanity publishing firm Luncheon Sausage Books (“Thinly Sliced Pages at Competitive Prices.”) Right now the notion that’s occupying my thoughts is whether there’s a quick book to be had from the 2017 election campaign. Something in time for Xmas, something fun, something a bit like the book I wrote about the 2014 election campaign – I have very few ideas that enter the dark, hollow chamber of my head.

The one I wrote in 2014 sold real good. Madmen: Inside the Weirdest Election Campaign Ever got to number two on the independent bookstores best-seller chart and went through four or five print runs. It was a diary of the last feverish fortnight of that chaotic and hysterical election. Now and then I read an excerpt from it at speaking events and that always goes down well – actually, the chapter about attending an excruciating Green Party function with Eleanor Catton and her partner Steve Toussaint didn’t seem to go down all that well at last year’s Auckland Readers and Writers Festival, when I read it at an event chaired by Steve Toussaint and with Eleanor Catton in the audience. Never mind!

It’s not the best book I ever wrote. In fact I had a look at it the other day and thought it was actually really terrible. But it was a book for and of the times, a commemorative teaspoon – and at 117 pages, about as thin. It was a souvenir of political madness. So many weirdos and goons were running around. Dotcom was there, gross and foolish, staging his epic fail at the Moment of Truth, with that smug sonofabitch Glenn Greenwald running around as his houseguest at the Coatesville manor; Colin Craig was there, running around with his press secretary Rachel MacGregor, in an intimacy that everyone in the watching press pack assumed was an affair; Whaleoil was there, Nicky Hager was there, Act leader Jamie Whyte was barely all there.

In short, election 2014 was totes lol. But that’s the thing about election 2017. It’s been short of laughs. It’s just not been that fucken funny bro. It’s been tense and exciting and Christ knows how it’s going to shake down on September 23, but so what? That’s not a book. That’s daily media.

The subject of an election 2017 book came up the other day when I met with my book distributor Paul Greenberg for drinks at the writer’s retreat, the Surrey Hotel in Grey Lynn. Paul and I first met during the making of Madmen. His services as distributor had been recommended by publisher Paul Little, so I called him up and we shook hands over the phone sort of thing. He worked like the devil on getting the book into stores and I owe its success to Paul as much as I’m indebted to production chief Katrina Duncan, editor Anna Hodge, cover designer Jenny Nicholls, and cover illustrator Josh Drummond, who painted John Key puffing quite contentedly on a joint.

The book came out in late November and Paul seemed to be phoning every two or three days throughout December to announce, “You’re running out of stock! Make another order!” I obeyed his every instruction.

We laughed and talked about those good times as we sunk back into our deep armchairs at the Surrey bar. It was a Saturday night. I wasn’t sure whether I’d see him again. Paul is unwell. He’s retiring at the end of this month after 40, nearly 50 years of fantastic service in the book trade. The best thing about setting up Luncheon Sausage Books has been the opportunity to work alongside this publishing legend; Paul has become a dear friend.

“Be fun to do another Madmen for this election, wouldn’t it,” I said.

“But it’s not that kind of election, really,” I said.

We chatted about other things but I began to wonder if there wasn’t something that would work and I suddenly interrupted him and said: “I’ve got it!”

I said, “An idea for an election 2017 book that I could do quick and would do the fucking business.”

I said, “So far I’ve only thought of the title.”

I said, “But it depends on whether Labour wins the election. If they lose, forget it.”

He took a sip of his wine. It might have been a thoughtful sip, I don’t know, but he didn’t offer a reply. In the silence, I said something or other along the lines of, “What’s this campaign really all about? What is its deep and resonant appeal? It’s not National, or English, and his bitter little anxieties about wanting to stay in power, although they may well win the election. It’s not about the minor parties – Winston is half the myth he used to be, Morgan’s obnoxious, James Shaw is James Bore and so on. It’s about the person who has animated roughly half the country. It’s about the rise of Jacinda, from the moment she became leader, that first spectacular press conference, right on through this campaign, the debates, the hipster bodyguard, the guy at Morrinsville with the sign reading SHE’S A PRETTY COMMUNIST – actually, maybe that should be the title of the book! – plus also the time she played me at table-tennis and my time on the campaign trail with her and my time on the campaign trail with her weak, bitter opponent, all leading towards her historic victory on Saturday night. What a book that would be! A souvenir of happiness!”

Paul later emailed, “I have run this past a couple of ‘savvy-nosed’ colleagues and they think it a great idea.”

Copies of Madmen: Inside the Weirdest Election Campaign Ever by Steve Braunias (Luncheon Sausage Books, $20) may still be available at Unity Books.