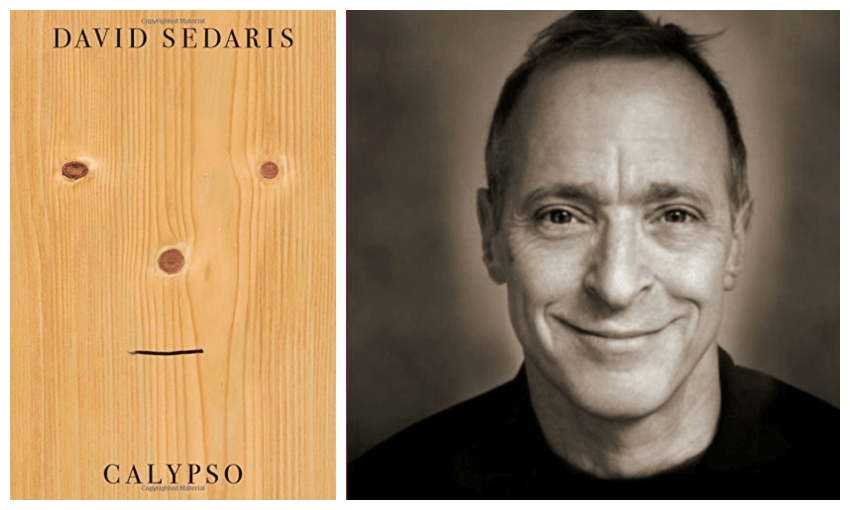 The third best book of 2018: Calypso by David Sedaris

All week this week we count down the five best books of 2018. Number three: Peter Wells reviews Calypso by David Sedaris.

Many people know the sound of David Sedaris’s voice – high, thin, a drizzle of ironic sound. He himself says he has a “lady voice” and part of his shtick is being mistaken for a woman on the phone. He is now a major writing star and he talks, in an offhand way, of touring 49 cities in 49 days. He speaks to auditoriums of around 2000 people in places like Brazil. But his most resonant memory of public speaking, in Calypso, is experiencing explosive diarrhoea and living in terror that he would shit his pants on stage. This mix of queasy shame and an endearingly personal tone – he makes it funny – is Sedaris’s brand and it has lasted him exceptionally well in book after book.

Calypso is a collection of essays, many drawn from sources like The New Yorker. I’m such a fan that I’d already read probably three quarters of this book. As with his other books, we get to know his family intimately, in essay after essay, seeing them from different points of the prism so they are revealed in new ways. The key event that underlies the sombre hue of this book, however, is the suicide of his sister Tiffany. It’s hard to make suicide into a comic routine. Sedaris doesn’t, thank god, attempt this but his humour nibbles at the edges of the way each member of the family deals with a sister and daughter who so adamantly turned her back on all their accrued wit and charm.

He himself recalls her screaming at him “go away and do some of your faggot writing”. In turn he remembers asking a security guard to shut the door in her face. There’s a sense of unpaid debts here, being paid out or spelled out in public. That Sedaris makes the material rueful rather than tragic or sentimental is part of his mastery of comic art. Tiffany was the one member of his family who inexplicably fell through all the middle-class apparatus that Sedaris himself tells us he assumed would keep them all safe. She blew inheritances, had substance abuse issues, ended up living in temporary accommodation in a room. Her body lay undiscovered for a number of days.

Sedaris, with that light ironic voice, humanises the dilemma and we see how the family as a unit (of originally six children) deal with it, mainly by talking. In some ways the Sedaris family remind me of JD Salinger’s fictional Glass family, all light humour with an undertone of tragedy.

Another thing that threads through this book is Sedaris’s loving relationship with his mother, now deceased. As with so many gay men, his father (still alive) was a bit of a monster, but his mother was a mass of charm and there’s a lovely scene when he acknowledges he picked up his story telling skills from his mother.  Whereas the father tramped off after the family meal the kids all sat round the table vying for the attention of their cigarette-smoking, steadily-drinking mother. “Her speciality was the real-life story, perfected and condensed.”

This is another hue within the book. Sedaris comes to terms with the fact his beloved mother was actually an alcoholic, and her life coarsened as she got older. He asks why nobody in the family asked her to stop.

These are the sort of questions all families ask – afterwards. Sedaris loves his family, even his father who is now in his nineties, frail and still a fervid Republican. Sedaris buys a holiday home so they can all be together. He replicates the family home so they can hang, but he takes over one part of the house for him and his partner Hugh (all mood lighting and tasteful mid-centruy furniture) while the rest of the family live in Big Save surroundings. This is a very touching aspect of Calypso, the way the Glass family, sorry, the Sedaris family display their inner fabulosity. Each one has something smart to say at the appropriate moment but there is nothing smartarse about these flawed humans. It’s a very delicate balancing act, and at times each member of the family appears both vulnerable and naked – but wisecracking at the same time, as a way to get over what is bothering them. Isn’t that what humour is, after all? Making a joke out of what is unpalatable.

Is the book funny? Oh yes, you can rely on the usual explosive gulps at his sheer outrageousness – the way he matches the ordinary with the unbelievable. One example of this is a small tumour he has cut off in macabre circumstances by someone he met at a book reading. He feeds the remains of the tumour to a turtle he’s very fond of – one with a deformed head.

This is the essence of Sedaris – he takes you on a trip, it’s beautifully detailed, its slightly unbelievable as in all tall stories, maybe even a little macabre, but it also has a baseline of human truth. Calypso is a nuanced book, and Sedaris still presents himself as the frail, balding, lady-voiced homosexual who now lives in Sussex and goes out each evening to pick up rubbish tossed out of passing cars. He’s kind of a crank, a nice cheery friendly crank and he knows it. But there’s also an element of melancholy grace here. We see this with his encounter with a fox, who he interacts with and who takes to following him at night. The fox is always a little ahead of him as if showing him the way. She turns up almost magically yet she never looks him in the eye.

There’s something so lovely here and you can’t help but feel, as a reader, you do the same – accompanying Sedaris on his way, never too close, not too far, but always in a beautiful proximity wherein you’re going to hear a real-life story, perfected and condensed.

The fourth best book of 2018: Simple by Yotam Ottolenghi

Calypso by David Sedaris (LittleBrown, $35) is available at Unity Books.