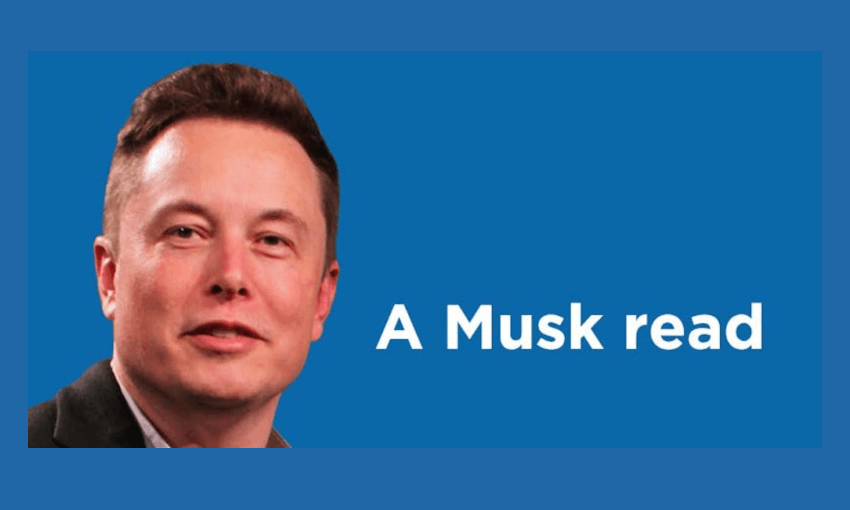 What do you call a scandal about a tech entrepreneur that goes on and on? Elongate

What do you call a scandal about a tech entrepreneur that goes on and on? Elongate

The week’s bestsellers at the Unity Books stores in Willis St, Wellington and High St, Auckland.

The first book of poetry to claim the number-one spot since the Hera Lindsay Bird phenomenon. “The poetry event of 2018“: Steve Braunias, the Spinoff Review of Books.

Lord of the rings, the necklaces, the brooches.

We look forward to the forthcoming review by Tina Shaw.

Novel about a British Muslim family’s connection to Islamic State.

8 People From the Pit Stand Up by Sam Duckor-Jones (Victoria University Press, $30)

Ashleigh Young, speaking at last week’s launch of this new book of poems: “I think many of these poems are playing with a familiar down-home blokiness and repurposing such blokiness to make it free-er, funnier, more generous. Sam’s paying attention to how we talk to each other and help each other, and he’s rewarding us endlessly for paying attention. I think his poems show us that we could have better and funnier banter, for a start. I also think these poems keep on subtly gesturing at the freedom we could have, if we let go of fear: fear of others, fear of ourselves. This freedom is waiting, around us and in us. It’s the kind of freedom that can turn a bucket of clay into a living being who dreams of paddling out at dawn, the kind of freedom where a zipped-up rural armpit can have a ‘small sashaying animal’ living in it. But it’s also the kind of freedom you have to work for, like seaweed – and as Sam says, ‘Nobody works harder than seaweed’”.

“When I first learned about Rotoroa, an island east of Waiheke where the Salvation Army ran a rehabilitation facility between 1911 and 2005, it seemed rich with potential for fiction. Newspaper articles of the early 20th century detailed some of the inmates’ more inventive escapades. It turned out the men who were committed to the island showed staggering resourcefulness over the decades. They rowed out to trade fish for beer. They found psychotropic plants. They distilled pretty much anything they happened to have to hand, including raisins, pumpkins, parsnips, even sugar and water….Until the 1940s, women were sent to the island next door, Pakatoa. In several accounts of the early days, men who hankered after female company either rowed or attempted to swim from one island to the other”: Christchurch writer Amy Head, describing the setting for her novel, in the Spinoff Review of Books.

The opshops of Auckland are going to be absolutely stuffed with copies of this runaway bestseller in about three or four years’ time when no one has any more use for Manson’s advice.

We look forward to the forthcoming review by Stephanie Johnson.

We look forward to the forthcoming review by Nicky Hager.

6 Cosmos: The Science of Everything edited by Elizabeth Finkel (Cosmos Magazine $18)

“In her debut essay collection, 2016’s So Sad Today, the poet and Twitter personality Melissa Broder wrote about her open marriage and an extramarital relationship she conducted over the course of more than a year with an intense, non-committal younger man who lived in another city. It began as a 21st-century epistolary romance: first via DMs, then as a series of sexts, trading back and forth fantasies that escalated from the purely pornographic to the hilariously absurd…Since So Sad Today, Broder has published a book of poetry — Last Sext (perhaps you’re noting a theme) — and now her first novel, The Pisces, which is a little like one of those tweet-length flights of fancy spun out into book-length form. It’s also the dirtiest, most bizarre, most original work of fiction I’ve read in recent memory”: Vogue.

10 Room to Dream: A Life in Art by David Lynch and  Kristine McKenna (Text Publishing $40)

We look forward to the forthcoming review by Philip Matthews.