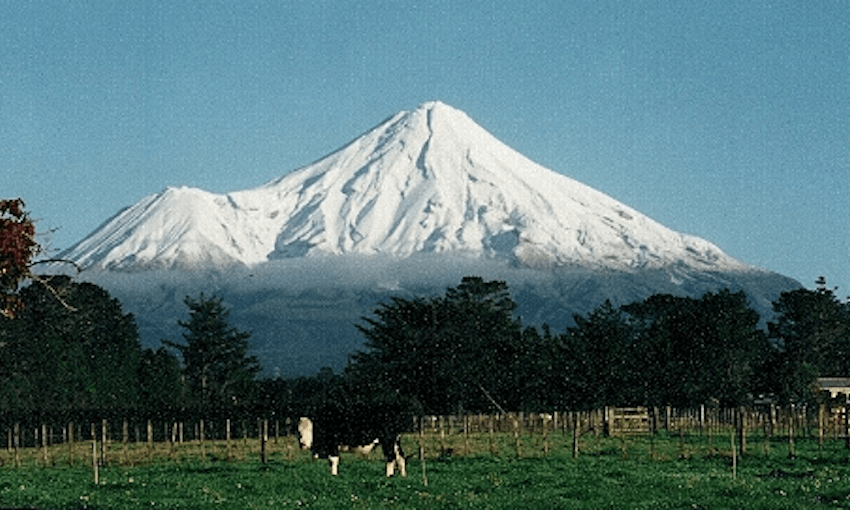 Is there any such thing as literature in Taranaki?

We continue our occasional series which investigates whether any literary activity exists in the provinces. David Hill reports from his “entombment” in Taranaki.

A lot of authors born in Taranaki have left the province on a permanent basis, to become successful or dead. The successful ones are Anthony McCarten and Stuart Hoar from New Plymouth; Dinah Hawken, Gaelyn Gordon, and Fiona Kidman from Hawera; June Opie from Mokau; Fleur Beale from Inglewood; Shonagh Koea from Eltham; Graeme Lay from Opunake, also Jackie Sturm, quondam wife of James K Baxter, and a much nicer human being to deal with; and Sylvia Ashton-Warner from Stratford. The dead one was Frank S Anthony of Midhirst, who wrote his gentle, innocent Me and Gus stories of dairy farms up skinny shingle roads and tongue-tied young men in hairy sports-coats, then sailed for England with a suitcase – a suitcase – of manuscripts, and died from TB in a Bournemouth boarding house in 1927.

Ronald Hugh Morrieson stayed. The author of classic novels Scarecrow and Pallet on the Floor died on Boxing Day 1972. He was 50. His only foreign travel was a month in Auckland and a long weekend in Wellington, after which he hurried home to Hawera – probably because the city pubs wouldn’t open after hours.“I hope I won’t be one of those poor buggers who’s discovered after he’s dead,” Morrieson famously told Maurice Shadbolt. For a while, Taranaki worked hard not to discover him at all. The guy who wrote narratives of Gothic squalor – wherein locals lusted, boozed, cheated, actually liked Māori – didn’t have much of a home fan base. His habit of sitting on the front verandah with a bottle while his mum mowed the lawn didn’t help. After he died, his Regent St house was torn down for a KFC outlet. But the excellent, improbable Tawhiti Museum, tucked beside an old dairy factory north of Hawera, now has a Ronald Hugh Morrieson Attic, showing the balding, flabby, pasty genius at work.

As for the rest of us who stayed…Well, there’s not a lot of us. The Central Districts branch of the New Zealand Society of Authors thinks about organising a Taranaki meeting now and then, but we’re not confident of providing a quorum.

There’s one of New Zealand’s most admired poets, Elizabeth Smither, a finalist in this year’s Ockham national book awards for poetry with her book Night Horse. There’s Mikaela Nyman, whose short fiction appears in Sport, Turbine, JAAM, and other pages which whisper “prestigious” – as in “We can’t pay much, sorry.”

There’s Michelle Osment, who lives up one of those country roads that go flat-out for the sunset, and writes kids’ picture books (including Perky the Pukeko) which sell in skip-loads and keeps bookshops solvent. Katherine Mansfield Short Story Award winner Rhonda Bartle now runs a seriously cool Airbnb north of New Plymouth, where dairy farms share fences with energy projects. Janet Hunt lives in Inglewood, accumulating fiction and non-fiction awards for prose from Year 1s to Year 101s, nearly all with a zoological / environmental focus.

There’s Rebecca Beyer and Linley Wellington, librarians in New Plymouth’s Puke Ariki, who produce Māori motif picture books. There’s Glyn Church of Oakura, on the dipping, snaking Surf Highway round the coast, who never offers me any of his Saturday apricot croissant, but who is an excellent bearded ex-Morris Dancer and professional plantsman, and writes tomes (I’ve always wanted to use “tomes”) on life-forms with leaves and life-forms who plant them that sell in stacks, here and in the other hemisphere.

Of course I don’t know every single writer in Taranaki, like the self-published authors, often of 19th century Land Wars narratives, whose prose tends to be…..unspoilt, but who’ve seen their book into the world and onto shelves, and good on them. And I don’t know everyone in the various writers’ groups, most members of which are hobbyists, which is fine; many of whom I’m sure harbour secret ambitions, which is also fine; a few of whom seem to harbour less-secret suspicions and resentments towards published authors, which is less fine.

And then there’s me. I write for a living. I also write for delight, discovery, and intermittent despair; above all, though, it’s my job.

I reckon there are four ways you can stay financially (half-)afloat as an author in New Zealand. You can win a major overseas prize, and endure jealousy. You can have another job, and endure condescension about how that must soooo curb your creativity. You can hold a university position or such, and endure envy about how it’s all right for some. You can write across a number of fields, and endure people who ask if you’ve ever thought of committing yourself to a major project.

The Taranaki authors I know exist via various combinations of the aforementioned four ignoble truths. They also exist via the efforts of a few good women and true. Step forward Pam Jones of the South Taranaki District Council, whose team organises the annual Ronald Hugh Morriseon Writing Competition, performing small miracles of organisatation, persuasion and encouragement across the province’s southern half, organising workshops in that arc of gnarly little towns (Opunake, Manaia, Kaponga) where the slopes of Mt Taranaki angle towards the Tasman. There are categories for high school writers – many of whom leave the area soon after, keeping up that terrible tradition – and old flatulators. There are multiple genres, some publication, pretty good cash prizes. Pam, I don’t know if you’ve been in the NY or QB Honours, but you should be, and well ahead of any Services to the Business Community.

What about bookstores? Poet Tony Beyer, briefly resident here a while back, once suggested the province’s best book outlet was The Hospice Shop. But for new titles, New Plymouth has a Poppy’s branch, which turns on so much wine at launches that prose writers become quite poetic. There’s also Pohutukawa, a kids’ bookshop, which carries every book by every author that owner Diane Hartley can squeeze in. (With artist Lois Parkes, she’s also produced a very endearing ankle-biters’ touch-and-feel book.)

I do miss certain things because of my entombment down here. I miss having a pool of writers to meet / drink / bitch with. I miss book events. Our Puke Ariki library does its best, with intermittent panels and readings. The biennial Taranaki Arts Festival and the annual Womad tend to feature author-performers, or media / political / wine-making / beer-making / food-making / dress-making celebrities-who’ve-done-a-book. That’s understandable, but still lamentable.

Yet I like being here. I like the fact we’ve got a street named for an author. It’s John Guthrie Place, after the 1940s-50s New Plymouth-born novelist who raised apoplexy rates in his home town by making some its citizens very recogniseable in some of his stories. It’s a cul-de-sac; how symbolic.

I like the way hothouse violets gasp “You’re an author and you live in Taranaki?” I like knowing almost every local writer, and I like the absence of factions. (It’s hard to have a faction of one.) I like the material that small to medium towns give. If you don’t believe me on that last one, read Jane Austen. She revelled in the strolling distances and the Happy Families neighbourliness.

I couldn’t have been a full-time author if I hadn’t come to Taranaki. In Auckland, we had two mortgages, and absolutely no way would I have had the money or the courage to go full-time. We came here; we bought a house 20 per cent bigger and 40 per cent cheaper. Suddenly, it was possible.

Do I ever wish I could be a writer elsewhere? Aw, yeah: about once a week. The feeling lasts for two minutes or so, and then it’s gone.