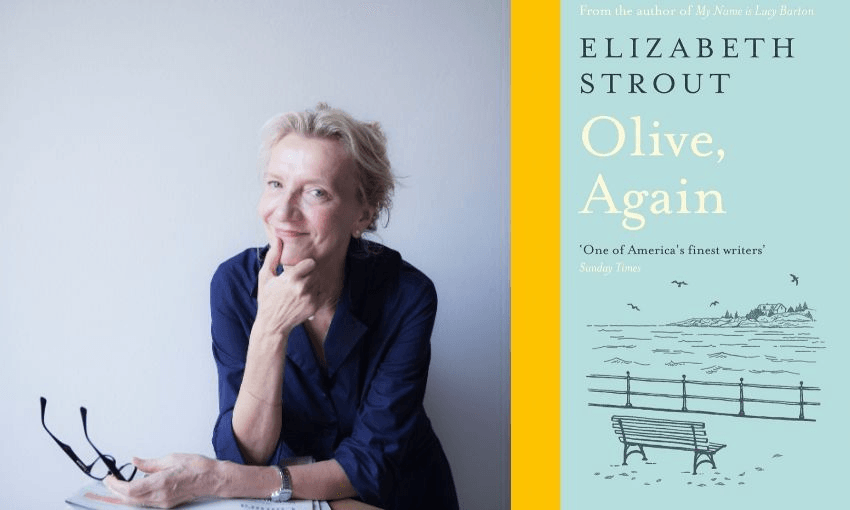 Look out, here she comes: A review of the luminous, tender Olive, Again

Marion McLeod revels in the return of Olive Kitteridge, the compassionate curmudgeon who won Elizabeth Strout a Pulitzer Prize.

It’s the year of the sequel:  My Big Fat Greek Wedding 3, Toy Story 4, Rambo 5 … Do movies ever make it to double figures? Books and miniseries certainly do. Genre fiction spawns sequels: much-loved detectives solve case after case after case, and children’s stories thrive on the comfort of repetition.

On literary fiction shelves, sequels are relatively rare. The prissily named category defines itself, after all, as rising above the popular. But recently two top-ranking “literary” authors produced sequels. Last month Margaret Atwood won the Booker – or half of it ­­­­­­­­– with The Testaments, her sequel to The Handmaid’s Tale. Days later Elizabeth Strout published Olive, Again, a follow-up to Olive Kitteridge, which won her a Pulitzer in 2008. Both ­­the originals reaped huge acclaim in print and huge amounts more as television. Sales for their sequels are unconditionally guaranteed. Perhaps all novelists should write with an eye to recycling.

Margaret Atwood bided her time: she published The Handmaid’s Tale in 1985, The Testaments 34 years later. Nor did Elizabeth Strout plan on giving Olive Kitteridge a second airing. As she told the Guardian recently: “She just showed up and I saw her nosing her car into the marina; and I thought: Oh man, she’s back.” In an excellent review of The Testaments, Pip Adam considers the sequel phenomenon. Should a reader approach primary text and sequel as totally separate entities? Should the original be read or re-read before broaching the new?

I was more than happy to re-read Olive Kitteridge. I loved it when I first read it. I foisted it on friends. A truly wonderful novel. Unforgettable!

I forgot it, of course. After a gap of 11 years, I’d even forgotten that it’s not strictly a novel. It’s a string of 13 short stories set in Crosby, a small town on the coast of Maine. Crosby and its inhabitants are fictional, but way more convincing than most non-fiction, than all non-fiction, I’m tempted to say.

While it’s not essential, I’m inclined to think that reading the two Olives one after the other amplifies both. I’d recommend it. Beginning the first for the second time, I was thrilled to be reacquainted with Olive. She’s a retired teacher (high-school math) and lives in Crosby with her long-suffering husband, Henry, a pharmacist. They have one child, Christopher, now a podiatrist. Olive, as the titles suggest, is the lynchpin of both the first and second books. But she is not your standard heroine. The word curmudgeon was designed for Olive Kitteridge. She doesn’t do charm or tact. She does honesty, but her brand of honesty leaves both the recipient and the reader gasping. Yet, against all odds, Strout has created a misanthrope who is appealing, even lovable. And certainly unforgettable.

In part, this is because Strout and her Olive have an audio-visual ally in the magnificent Frances McDormand, who won Emmys for her performance in the HBO adaptation. Celluloid hasn’t a hope of capturing the full complexity of the written Olive. Nevertheless, McDormand comes close. I was aware, reading and re-reading, that the on-the-page Olive has melded, for me, with the onscreen version.

Mind you, though Olive is central, she is not omnipresent. Every now and then Strout, the omniscient narrator, detours to write about the lives of other locals, some of whom studied math with Mrs Kitteridge in the distant past.

But of the many pleasures to be found in returning to Olive Kitteridge, the greatest, for me, is the tone, the humane, good-humoured, compassionate tone which runs through all of Strout’s writing, now seven books in all.

Reading Olives 1 and 2 in quick succession points up similarities. They are cut from the same template. Each contains 13 stories, discrete and yet connected: what some call discontinuous narrative. The sequel opens a month after the first ends: the town and its marina are unchanged. Again, Strout sometimes parks Olive in the wings and diverts the narrative. This time she even engineers occasions to resurrect characters from her earlier books, from The Burgess Boys and Amy and Isabelle – and I’ve no doubt there are more I missed.

The sequel’s opening also parallels the original book. Neither, somewhat surprisingly, opens on Olive. The first story in the first book focuses on Henry Kitteridge, dwelling on his childhood, his pharmacy, his employees there. Olive, Again similarly sidelines Olive and this time zooms in on an old man with a sloppy belly. The belly belongs to Jack Kennison. Once, he remembers, he was a tall, good-looking man, no gut, who strolled about the Harvard campus and intimidated colleagues. Now he’s a retired and lonely widower living in Crosby. But he’s not stupid. “He knows he deserves his misery. He deserves the pad he has to wear after prostate surgery. He deserves his daughter not wanting to speak to him – for years he wouldn’t speak to her because she is gay.”

Actually, there is only one person Jack really wants to talk to. “Tall, big; God, she was a strange woman … They’d gone to dinner a few times, a concert. He had kissed her on the mouth. Olive Kitteridge. It was like kissing a barnacle-covered whale.”

Olive Kitteridge opens on the kind and patient Henry, Olive’s first husband. Jack Kennison, not so patient, not so kind, is to become her second. Olive, Again gives us Olive after two years of widowhood. You wouldn’t say grief has mellowed Olive: mellow and Olive do not belong together. But grief has given her pause. Grief and ageing. Olive is now in her late seventies. Olive Kitteridge was about ageing but its sequel ups the ante. It’s about memories, about regret, about wanting to make amends. Olive is determined to get to know her son again, and her daughter-in-law and grandchildren: the pathos in these particular stories is almost unbearable.

Olive, Again is also about accommodating mind and body to indignities present and to come. Which may not be a great tagline. But the book is a terrific read – sometimes funny, sometimes deeply affecting, sometimes luminous. More luminous, perhaps, this second volume, possibly because ageing offers more time for contemplation.

Ten years ago, in a Guardian interview, Strout paid homage to Alice Munro and Virginia Woolf. But also to the Russians and to William Trevor, whom she cites as the greatest influence on her writing. “What a writer he was; he could flip over a sentence so gently and show the underbelly in a heartbeat. His work is always quietly compassionate.” It would be hard to find better words to describe the essential Elizabeth Strout, whose luminous prose only gets better and better. Read separately or together, her Olive Kitteridge books are compelling and tender – and unforgettable.