Learning to read is taught at school, but learning to sit properly isn’t. Here’s how to keep an oily spine.

If you’re reading this, you probably know how to read. But do you know how to sit? Summer is coming, which means one of our family members is about to gift us a book and we will have to use our bodies to read it.

But could lying on your tummy at the beach cause irreversible spine damage? Probably not! Just in case, we asked posture specialist Michelle Owen to run us through some very normal reading positions. 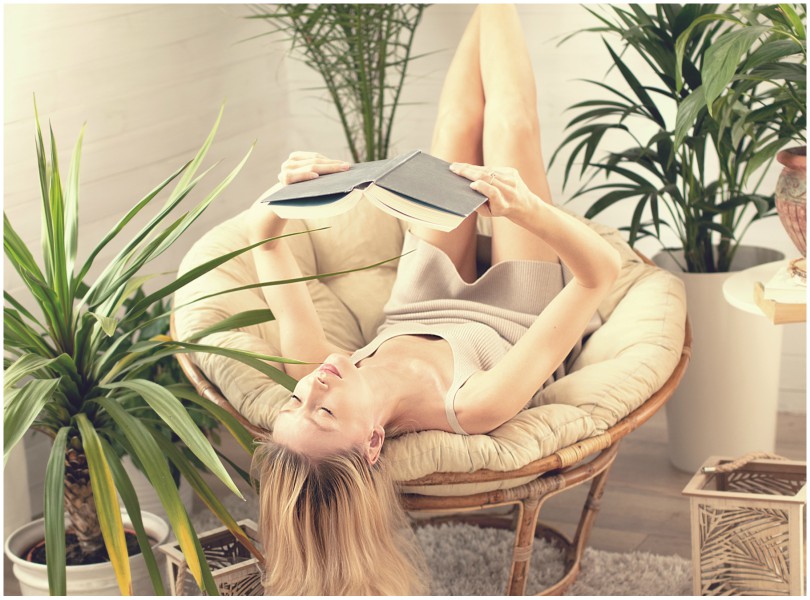 This reader has hung herself upside down like a bat, possibly to get more blood into her brain so she can read faster. Owen reckons this probably won’t work out, because unlike a bat head the human head weighs between 10 and 15 kilograms. “It’s a lot,” she says.

“Her neck’s going to feel very strained very quickly. She might be fine for five minutes but then she’ll be flipping around.”

Owen recommends keeping your head in neutral position when possible (ear over shoulder, cheekbone over collarbone). “The more the head drifts forward, the more weight on the upper back, and that’s where you see dowager’s hump, which is a fatty deposit that builds up to stabilise the head.”

Owen says this painful hump can stop the nervous system from doing its job well. “If our head has drifted forward [forming a hump] it’s like running over a hose with your car – you’re blocking the supply to the body.” She’s got a coconut and a drink? Sunglasses and a hat? Two books and a phone! This woman could have it all, if only she had more arms! She’s got great posture, too.

“That’s quite nice,” says Owen. “She looks at ease there. A tight guy could never be there comfortably.”

“Some people are really loose and floppy in their joints,” she says. Many people would find this position uncomfortable. “Other people, if they’ve got disc herniations or sciatica, they can’t sit. They can’t even get down. It’s so many people, you’d be surprised.”

Inflexible people could never relax as hard as this woman. “A very tight guy would have to get a chair or a log to be as comfortable as that girl.” 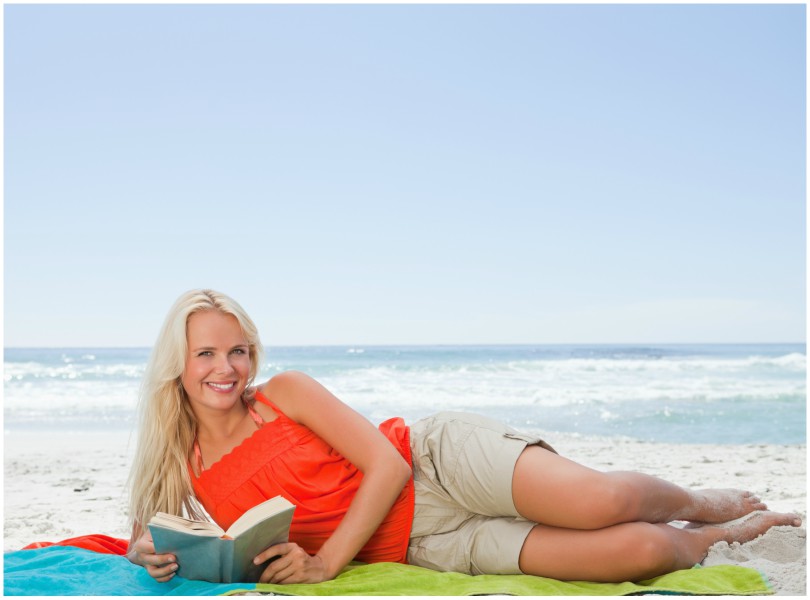 We’ve all been here. It’s a little sexy, a lot contorted. “She’d get very sore on one side,” says Owen. “If she’s stuck there too long she’ll start feeling miserable. There’ll be kinks in the neck, and the muscles will be short for too long.”

But according to Owen, if she swaps sides now and then she’ll be fine.

“She’s all scrunched up in the hip and waist, but our body is made to go into these positions.”

“The most important thing is not being stuck in a position for too long.” 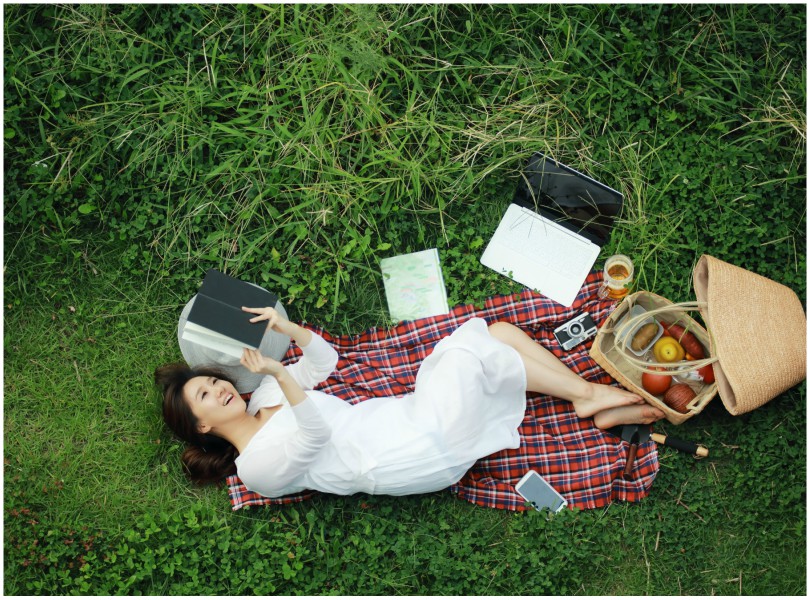 Our reader reclines in soft grass in a gentle “C” shape, her book held out to the sun like an offering. “She could be comfy there for a little while, but then she’s going to get very sore in her middle to low back because she’s stuck in an extension,” says Owen. She says the key to staying comfortable is to keep moving.

No worries there, as this young reader will have to do a sit-up to reach her pint of beer and raw potato.

“Doctors say to people all the time, ‘keep moving’, and what does that mean? It’s so general,” says Owen. “They can go for walks, but they’re still stuck in their spine.”

Stiff-spined readers need to keep their bones oiled if they want to keep writhing around in the grass like this. Owen says simple, small movements like gliding your head back and forth and pumping your shoulders up and down can keep your joints easy, breezy, and beautiful. “It’s like putting CRC into a rusty old gate,” she says. Here we see that boomer excess income at play with a whole chair. Yes, she’s only gone and read her book on a piece of actual furniture. What a flex. Owen approves using a chair but would like to see better back support. “She’s so laid down her back is in a big flexion. If she were in a more upright chair, that would be a good position.”

The drink gives this reader bonus points. Owen recommends chug-a-lugs and juicy fruits to keep your muscles wet. “Our body is roughly 70% water, so the cells, the fascia, the brain – they’re mostly water. The body will take water from anywhere – the bowel, the joints – to supply the nervous system.

“If you think of a maidenhair fern, they just shrivel like death, and then – boom! – come back to life with water. And we’re much the same.”

If we don’t keep our water levels up, any position could cause problems. Owen says to think about what you want your muscles to look like: “do you think grape, or raisin?” 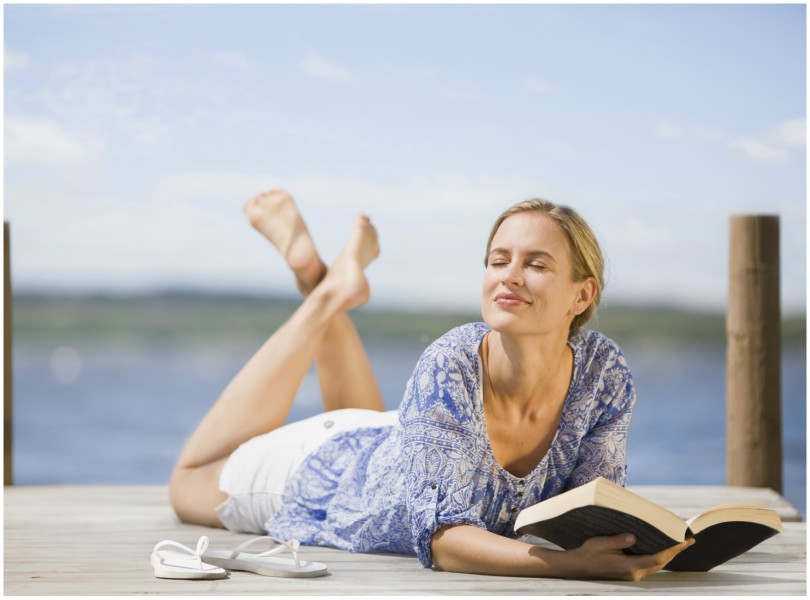 Did you know pythons don’t crush their prey to death? They usually kill by inciting heart attacks. Similarly, holding this snake-inspired reading pose won’t in fact crush your vertebrae like a defenceless rat. “Her head isn’t in such a bad position,” Owen says. “She’s hinge-ing from an area that’s fine for a little while.” Like a snake’s jaw, she’s feeling loose.

Eventually she will feel the need to move, but Owen is a strong believer in listening to your body. If this woman is happy doing cobra pose-lite for five hours, then all power to her.