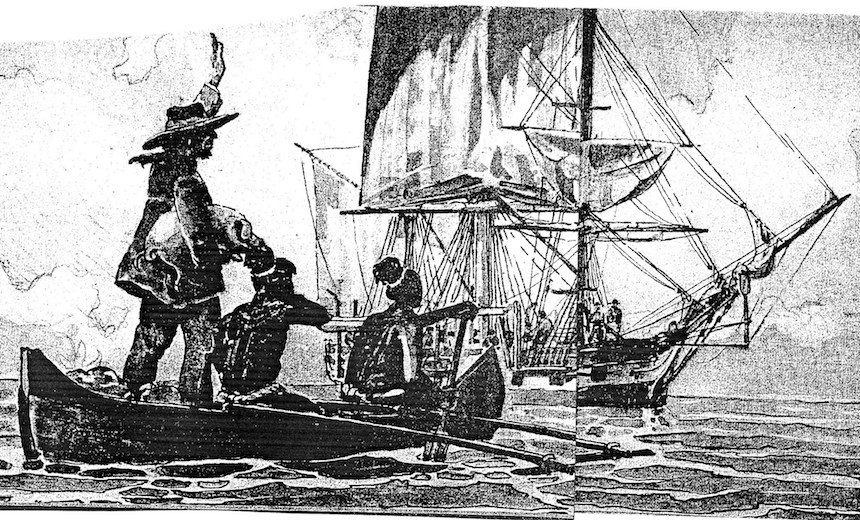 The pirate who came in from the cold

By Joan Druett
Guest writer
Made possible by

On Monday we ran a piece about 19th century sea captain William Hayes by his biographer, Wellington historian Joan Druett. Some readers were appalled it made no reference to his involvement with slavery, or “blackbirding”. The story was pulled.

We have reposted a slightly amended version today – and await a review of Druett’s book by journalist Michael Field, who was among those angered by the original post’s glossing of the more unsavoury elements of his past.

Captain William “Bully” Hayes was a cheat, a bigamist, a conman and a “blackbirder” – that is, a captain who enticed Pacific Islanders on board his ship, and then carried them off as cheap labour for the plantations of Fiji, Queensland and Samoa. A notorious celebrity in his own lifetime, after his death he became an enduring mythical anti-hero, the so-called “Pirate of the Pacific”.

But was he any kind of pirate? Or was he a man virtually invented as a pirate?

True, he cheated merchants, and once disappeared over the horizon with an unpaid cargo in his holds. Yet these crimes were common enough. They were the acts of a simple crook, not a pirate. Hayes never boarded a ship with a sword in his hand and a knife between his teeth. He never killed a man. He didn’t even drink hard liquor. Yet somehow the newspaper writers turned him into a legendary corsair.

But how, and why? It was mystery that fascinated me, and inspired my biography The Notorious Captain Hayes: The Remarkable True Story of The Pirate of The Pacific.

I discovered that the first to create the myth was a newspaper proprietor in Honolulu. Henry Martyn Whitney was a true American entrepreneur, full of ideas and ambitions and energy. As the publisher of the Pacific Commercial Advertiser his aim in life was to publish breaking news. On September 24, 1859 he published the story that was to trigger the Hayes legend. The headline: THE HISTORY OF A CONSUMMATE SCOUNDREL.

For the first time breathtaking swindles were exposed, along with details of a dissolute life. It was stirring stuff, compulsive reading, reprinted by newspapermen all about the Pacific, without any questions being asked.

In the years that followed there were occasional updates on his exploits – in 1868, the Wanganui Herald mused that Hayes “had a great deal of the pirate in his disposition”, and a Sydney newspaper in 1873 exaggerated him as “the notorious Captain Hayes, freebooter, swindler, pirate and murderer”.

It took until 1876 for the legend to firmly take root, and once again it was courtesy of Henry Martyn Whitney. As the owner and editor of the Hawaiian Gazette, he published an article headlined SKETCH OF THE NOTORIOUS CAPTAIN HAYES.

Hayes met a violent death the following year. Good career move: it turned him into an even more compelling figure. The metamorphosis was spearheaded by the San Francisco paper, Daily Alta California, which summarised his story under the title, The last of the pirates. In May 1899 the New York Tribune published a racy, even more imaginative version.  Not to be bested, the editor of the New York Sun produced his own lurid yarn – BULLY HAYES, PIRATE OF THE PACIFIC, THE THRILLING STORY OF A DOUBLE LIFE.

Writers of trash fiction jumped on the band wagon. Albert Dorrington published Bully Hayes’ yarns in London magazines, depicting him as “half pirate, half hero”. Down at the bottom of the world, colonial readers loved this kind of sensational stuff. In 1903 the editor of the Christchurch Press asked for letters from anyone who remembered meeting Hayes. They were duly rewarded with colourful descriptions. “He was of a courteous and gentlemanly demeanour, a big man and well-proportioned,’ wrote WR Turner. Another reader, Alfred Gee, write that he would never forget meeting Hayes — “a man of splendid physique, fully six feet in height, and proportionately well built”.

Naturally, many books followed this kind of outpouring, some serious, and others not so, with titles like Bully Hayes, South Sea Pirate. The strange result is that Captain William Henry Hayes – a common conman, blessed with a certain charisma – has become enshrined as a flamboyant buccaneer of the Pacific.

The Notorious Captain Hayes: The Remarkable True Story of The Pirate of The Pacific (HarperCollins, $18.99) by Joan Druett features in the latest best-seller chart at Unity Books.