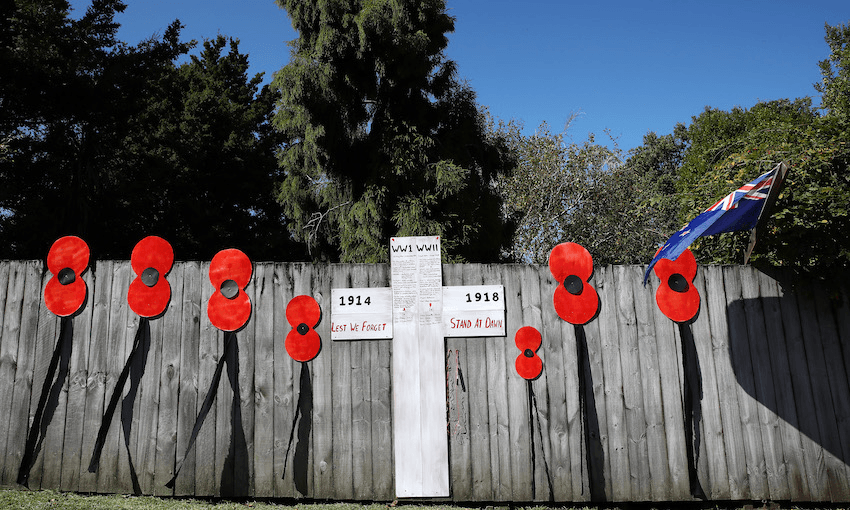 A display on a fence in Titirangi, Auckland (Photo: Fiona Goodall/Getty Images)

Lockdown letters #30, Fiona Farrell: There is no going back to normal

A display on a fence in Titirangi, Auckland (Photo: Fiona Goodall/Getty Images)

Anzac weekend has always been a time for thinking about our country and during this one, in the quiet that has fallen during lockdown, we can contemplate a new kind of New Zealand.

Yesterday I put on a fire, the first one this autumn. Dragged a newspaper from the wood basket, glanced at it the way you always do when you’re scrunching up paper for the fire. January 31, 2020. Front page news was the closure of the Octagon. A council planner had come up with an idea. They would close the city’s centre to vehicles between January and March. It would make the Octagon “vibrant”. It would attract tourists from the cruise ships. A sand pit was installed at its heart, and a couple of ping pong tables. White picket temporary fences blocked off streets along with wooden boxes planted with scrappy coprosmas. It was called “The Octagon Experience”. It feels like ancient history.

It’s Anzac weekend. The day for poppies and wreaths. When I moved to this house I planted the chrysanthemum. The one with little bunches of rust red flowers and that smell that always makes me think of cutting the cardboard cross from the Kornie packet, then laboriously stitching each flower in place till it was ready to hang with all the other wreaths on our school gates. That was our sole observance as a family. My dad, who had been wounded at Alamein, refused to march. “Pack of wooftahs,” he called the RSA, and worse, as they lent their support to wars in Korea and Vietnam. He left them to their marching and speeches and headed down to the 2nd NZEF club rooms, a gritty roaring male place next to the foundry, to get royally drunk with his mates. He’s still with them, buried in the soldier’s section in the Ōamaru lawn cemetery.

What mattered to him wasn’t the war. That was over and done with. What mattered was what came after the war. Those streets of sunlit houses ridiculed as boring in the oh-so-exciting neoliberal revolution of the 90s were not boring to him. They were a sign of triumph. The peace and plenty of an orderly western democracy, the health and education delivered by a functioning welfare state, the glorious opportunity he and his mates had been able to deliver to me and my sister and an entire generation – they gave meaning to his lifetime of acute pain, paralysis and early death.

Now we’re caught up in another struggle. We use the language of war to describe the effort to control a virus. We are “fighting a battle”, or “losing the battle”, medical staff are “on the frontline”. Yesterday the ODT led with a crimson headline, “BLOODBATH!” to describe the collapse of tourist numbers in Central Otago. It followed the previous day’s front page photo of hundreds of rental cars parked up in Queenstown, like the aeroplanes and the cruise ships we’ve seen parked up around the globe.

On Tuesday we emerge from lockdown onto the mezzanine of level three. Before too long we hope to go down a flight to the softer lights of level two, and eventually level one, ground floor and exit. Whatever it is we will emerge into, it will not be the past. There is no “going back to normal”. Normal isn’t a fixed place. It’s not a destination. Those five million tourists will not be flying in from Shanghai and Sydney and LA to take up their rental Corollas and Barinas any time soon and the millions spent under the Key government to persuade them to do so now seem a bit futile.

The Octagon Experience dates from that same distant era when the cruise ship passenger and the overseas tourist briefly held the heart of our cities and our plans. We supplied them with rides, on gondolas and jet boats and helicopters, we gave them 20 different kinds of coffee, we gave them wine. We gave them a sandpit. We built hotels and casinos in our cities, and suburbs of Airbnb houses, and we proposed an international airport over the beautiful bare brown acres of Central Otago. We seemed set on turning ourselves into a kind of Bangkok, a South Pacific playground for Asia’s newly rich. We got caught up, as island people can, in some kind of cargo cult, dancing to entice John Frum to our shores with all his lovely money.

Well, now we can think again. Anzac weekend has always been a time for thinking about our country and this one, in the quiet that has fallen during lockdown, is one where we can contemplate a new kind of New Zealand. I don’t know how it will be, but I have confidence we are being led by people who do have good ideas. I hope after all this upheaval that it will be a masterpiece of creative thinking. Something of which we can be proud. A triumph.

And in the meantime, as I wait for Ardern and her ministers to show us what that might look like, I shall pick some chrysanthemums, those little Anzac flowers, and I shall put them in a jar on the table. And I shall think about my dad.