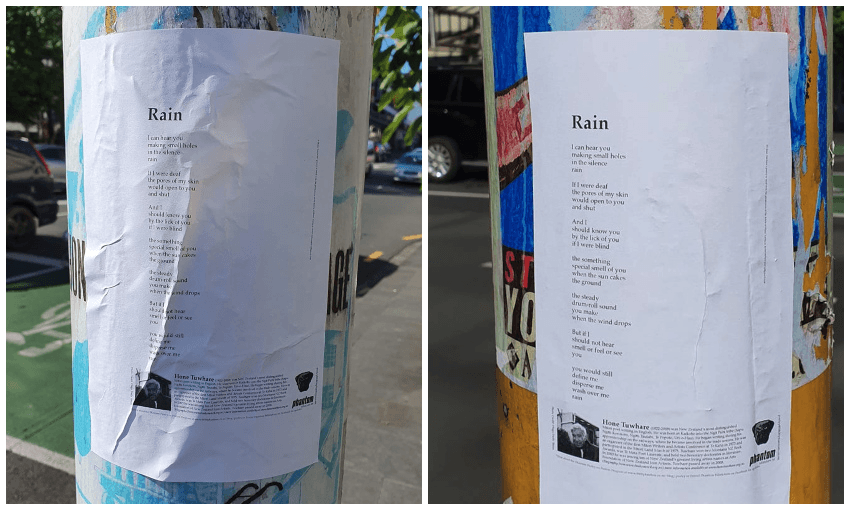 ‘I could’ve drawn a big penis on it, you know, but that’s really unoriginal.’

If you were charging through the mean streets of Newmarket last week, to the mall or to work or the train, you might have noticed a couple of A4 posters at eyeball level on the traffic light poles at the corner of Khyber Pass Road and Broadway. Right above where you push the pedestrian button.

If you were there early in the week, or on Thursday morning, or any time before about 5pm on Thursday, those would have been propaganda posters for a newly-hatched white supremacy group.

But at 5pm on Thursday there came a gentle pitter-patter. A cleansing. It was as if those posters had never been, because over the top of them were stuck printouts of Hone Tuwhare’s poem ‘Rain’.

I can hear you
making small holes
in the silence
rain

the steady
drum-roll sound
you make
when the wind drops

you would still
define me
disperse me
wash over me
rain

The legend who committed this quiet act of protest is named Donna. She doesn’t want her last name used. She works in admin in Newmarket and sometimes she catches the train to work. On Thursday she did catch the train, and so she walked past those posters – she saw two of them – and they pissed her off.

She could see that someone else had scraped away bits of the poster, and another someone had re-written the website address.

Donna’s not one for impulsive action. So she went to work and cogitated.

“I made a few attempts at getting them removed altogether. First of all I emailed the local business association because I have their contact details, and I sent them photos and said ‘Look this is really concerning and I think some action needs to be taken.’

They came back and said we’ll forward this to Auckland Transport.”

Just in case, she also went to AT direct, sending a DM on Twitter, again asking for the posters to please be removed.

“You know, I was telling a workmate about it and she was jokingly like, ‘Oh, well I’d better be careful going through the middle of Newmarket that nobody tries to run me down’.”

Donna is Pākehā. “I acknowledge that I don’t feel [racism] on a daily basis. I see it, but I don’t feel it … We live in a diverse city so these are my friends and colleagues and kids at my children’s school.

“So I thought, okay, what am I going to do if I get back down there this afternoon and these posters are still there? Because they can’t stay. They can’t be visible.

“I could’ve drawn a big penis on it, you know, but that’s really unoriginal. I thought no, I’ll just put something completely different up there, something beautiful, something interesting …”

Donna started googling Māori poetry, and ‘Rain’ leaped out at her – poetry’s not her bag, she says, but she liked the words and the rhythm. She printed a few copies, and nicked a gluestick and a Vivid from work. And she set off back to the train.

What did it feel like pasting up her own posters?

“Ummm … Scary, actually. It was quite nerve-racking because it’s a busy intersection, there’s lots of people around … I felt self-conscious because here I was, doing something different to everyone around me.

And the best part of this small story? Right after Donna finished sticking up the poster someone strolled over and started reading it.