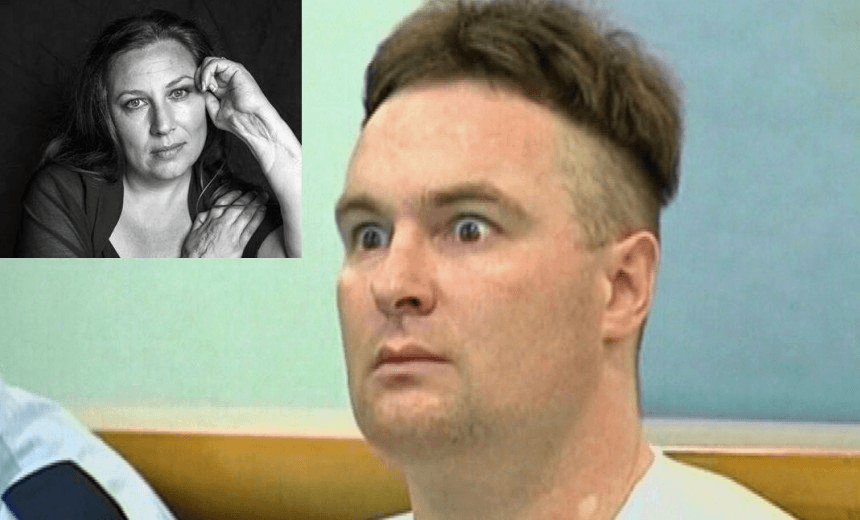 By Simonne Butler
Guest writer
Made possible by

This week in 2003, Tony Dixon took to two women with a Samurai sword. Simonne Butler sets the scene for the attack in her new, powerful memoir.

When we entered the carport I saw a nail gun and shivered. An eerie feeling overcame me, but dissipated as I walked on.

As soon as we entered the front door, Tony locked it behind us, though I didn’t think this was strange as the door only shut if it was locked. When he did the same to the next door, however, I was instantly on alert. Why lock the kitchen door? I wondered what was going on.

He was suddenly agitated. He screamed at Renee. I couldn’t see her. I didn’t know where she was. I looked around the kitchen and dining room. It had a bunk set in it and I saw her lying on the bottom bunk, covered in blankets. I sat down at the table while he screamed at her. She finally got up and came and sat at the table opposite me.

I noticed a trickle of blood on her forehead, it emerged from her hairline and stopped above her eyebrow. I remember saying, “Honey, are you okay? What’s wrong?”

She appeared dazed and didn’t say much. Her hand was wrapped in a tea towel. Tony was still out of control, screaming at us both. It was intense, insane rambling at the top of his voice. He screamed that I was paraboling him.

Paraboling is when someone uses a microphone with a cone on it to listen in on someone else’s conversation, like in spy movies. I’d never heard of it at the time. It sounded like more of the same paranoid craziness he’d been spouting since I got back from Australia.

He screamed that I was sleeping with the police, that I was trying to kill him and that I had been paraboling him from the boat ramp across the road.

In the middle of his screaming fit he sent Roger upstairs to go and find his phone. Roger left and Tony turned his attention back to us.

He ranted that he now had proof that I was working with the police because Renee had told him. But he couldn’t maintain focus. He blamed me then her. He’d flip back to me and say that Renee was working with the police against both of us, and that this had gone on for a long time. Then he’d go back to his verbal attack on me and it was me who was their agent against him and Renee. He was going round in circles.

Then he grabbed Renee. He screamed at her and picked her up and shook her. Then he pushed her between the door and the kitchen table. I got up and started yelling at him.

I could usually calm him down, even if it meant getting punched in the head a few times in order to achieve that goal. But on this night, there was no way to reach him.

I have memory gaps, but the next thing I recollect is jumping between them, yelling, “Hey, what are you doing? Where’s this coming from? Calm the fuck down, what’s wrong with you? I don’t understand.”

Then it was all on. All of a sudden he had a samurai sword in his hand. It wasn’t sharp, just an ornament that had been around forever. But that didn’t matter. It was in his hand and he swung it around wildly. He came at us both, screaming he wanted to chop our heads off, and that we had to bow.

I’m pretty quick, but I’m not that quick, and I was backed into a corner, there was nowhere to go. I raised my hands in front of me to protect my face and head.

He wanted me to bow down, to kneel, so that when he chopped my head off it would land in the washing basket, because he didn’t want a mess.

I wouldn’t back down. He demanded I kneel and screamed at me, “Do it, do it, do it!” I stood up to him, shouting “Never!”

He told me to kneel so he could execute me. I remember he said if I just admitted I was surveilling him, then he would spare my life, otherwise I was going to die tonight. I didn’t care and refused to back down. I knew I was going to die either way. Unlike Renee, who was agreeing to whatever he said, I hadn’t been hit in the head that day and was thinking clearly.

It was crazy and full on. He told me that if I admitted that I was sleeping with the police and that I’d been paraboling him that he would spare my life. That’s when he started saying I was a sacrifice ordered by Allah. I hadn’t heard this last one from him before. He wasn’t that religious, and if he talked about religion it was the Jehovah’s Witness beliefs of his mother.

The ramblings about Allah may have coincided with his beliefs that the police thought he was a terrorist, but I couldn’t begin to guess what he really believed. All kinds of psychotic things by then.

I wouldn’t admit any of it because it wasn’t true, and I’ll never back down when I’m right. He came at us both, swinging the sword wildly…

Double-Edged Sword (Mary Egan, $38) by Simonne Butler with Andra Jenkin, named one of the best books of 2016 at the Spinoff, is available at Unity Books.