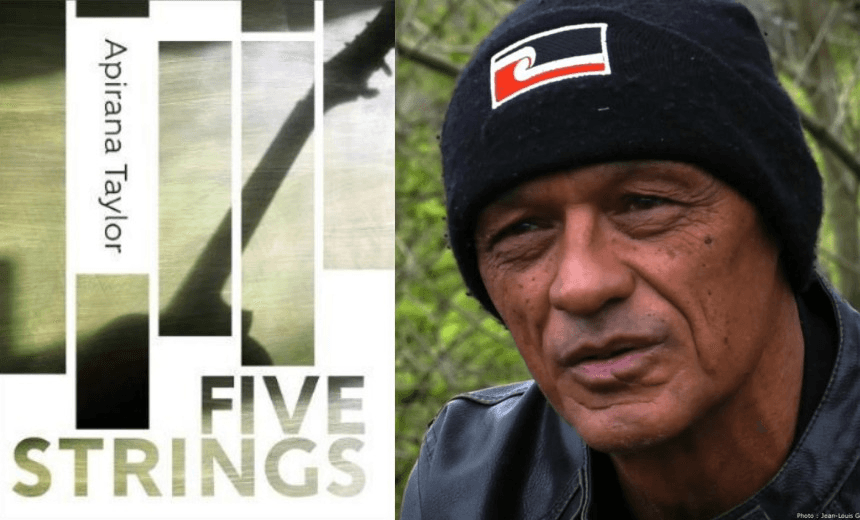 Māori writing in 2017: Apirana Taylor on the making of his novel about two alcoholic drug addicts

By Apirana Taylor
Guest writer
Made possible by

I sat down one morning to write a sentence which culminated in a 245-page novel several years later. A little bird sang, “This story is true. Write it.”

And so I wrote Five Strings, a love story about two alcoholic drug addicts called Puti and Mack, who live in the criminal underbelly of New Zealand’s underworld along with other outcasts, social misfits and the dispossessed. They stumble through life in a haze of booze, smoke and mental problems occupying the lowest rung on the social ladder.

This novel grew out of a world I know about. As a 20-year-old I was in the pub when a man had his back broken in a fight over a pool table. I drifted into this life with a growing sense some of the stories I’d write would come from here.

I opted out of university and went to the pub, where guitars played, people fought, sang, boozed, embraced each other, wept, cried and destroyed themselves.

One of my best friends had Jimi Hendrix posters plastered over his bedroom walls and ceiling to cover his blood stains put there by his father. My friend Dave and his mate were insane Pākehā, turfed out by the mental health system onto the street to look after themselves. Dave’s mate hit him on the head with a cabbage because Dave ate their can of dog food and hadn’t shared it with him.

I worked with and sometimes drank with the Wellington Mongrel Mob. There were some bright well-read members in that chapter. Most if not all of the Mobsters came from violent backgrounds. I considered patching up but one of the Mongies with foresight talked me out of it. On reflection I chose a totally different path. However, Puti and Mack, the main characters in Five Strings, are trapped in this destructive cycle.

Initially this lifestyle seemed a great party to me but the gloss wore off the apple and I realised what a sad world of wasted lives it was. On Thursday, Friday and Saturday nights pubs erupted in drunken brawls throughout the country at closing time. Women were consistently beaten to a pulp.

One afternoon I was in the pub when I looked out the window and saw lines of people march into the square. “What’s that about?” I asked. “It’s the Māori Land March,” said my mate Pad, which set me thinking. Why are Māori protesting and what’s the problem, I wondered? I looked for answers. In search of Te Ao Marama I found that if society was an apple at least half the core was rotten. Godzone has a gaping hole in its puku. Māoridom, it can be argued, can thank successive governments that have over the years disempowered our people, often leaving Māori up the creek without a waka. Our mental health system is a hopelessly inadequate shambles. Suicide is ever-present. Why, in this supposed economic miracle, are people queuing up at food banks and noticeably spilling out onto the streets? Families are living in cars. The dole is a disaster for Māori and many others. What are the implications of this?

Māori now have less than one percent of their land. How does this affect Māori autonomy, economy and demography? Due to past mistakes, the Māori language is almost on death row, like a bird with a knife at its throat.

From my poem “Uncle Hakaraia”:

it was hard trying not to speak Māori

the first time he forgot

crack the teacher belted his knuckles

Māori persevere in trying to maintain Te Reo. Positive help is needed for the bird to fly.

The death of a language signifies the sad passing of a life. This is true for many cultures and this is partly what inspired Five Strings. A call to look at our social problems and find answers.

Māori writers including Alan Duff, Witi Ihimaera, Patricia Grace and many others have written out of such a maelstrom.

James K Baxter, Denis Glover, Noel Hilliard, Barry Crump and Janet Frame are Pākehā writers who have wandered through similar fields in their writing, portraying social outcasts and the dispossessed. Who does so now?

We are different people living in one country and all our stories are important and deserve their place within the literary fabric of our land. I had no conscious political axe to grind when I wrote Five Strings. I wanted to write a love story, yet social problems flow beneath the book’s surface as does the hope that there is light in the dark.

The need to search for Te Ao Marama, is what finally gave birth to Five Strings.

Puti and Mack are human beings portrayed with their strengths and weaknesses in the hope that we will see through racial and class prejudice, respect each other and care for those less fortunate than ourselves.

This is what caused the bird to sing the story of Five Strings. There are two paths we can take. The trail of death and destruction; or life and creation. You choose.