To mark the publication of a new collection edited by former prime minister Helen Clark, we tasked Sophie Handford, School Strike 4 Climate coordinator turned Kāpiti councillor and one of the book’s contributors, with putting the questions.

Sophie Handford: What is your message to young people in New Zealand around climate change?

Helen Clark: By definition, the future is about youth, and so I think pushing for youth engagement and leadership on the policy debate is incredibly important. I’d be encouraging youth to take it up a step from the Friday strikes to serious engagement now, at the policy and even political levels. What our cities do, that matters.

So using all the forums that there are – and just as I talk, I’m thinking about the beach community where my father lives, the community board has a half-hour open forum, every meeting for the community to come in – there are these kinds of opportunities. There’s opportunities to be part of planning processes.

The way we design our city, our transport systems, whether we make it easy for people to use public transport and to bike and to walk: these are all things that are very practical and that can be done.

Young people shouldn’t underestimate their political voice. They must use it to mobilise. 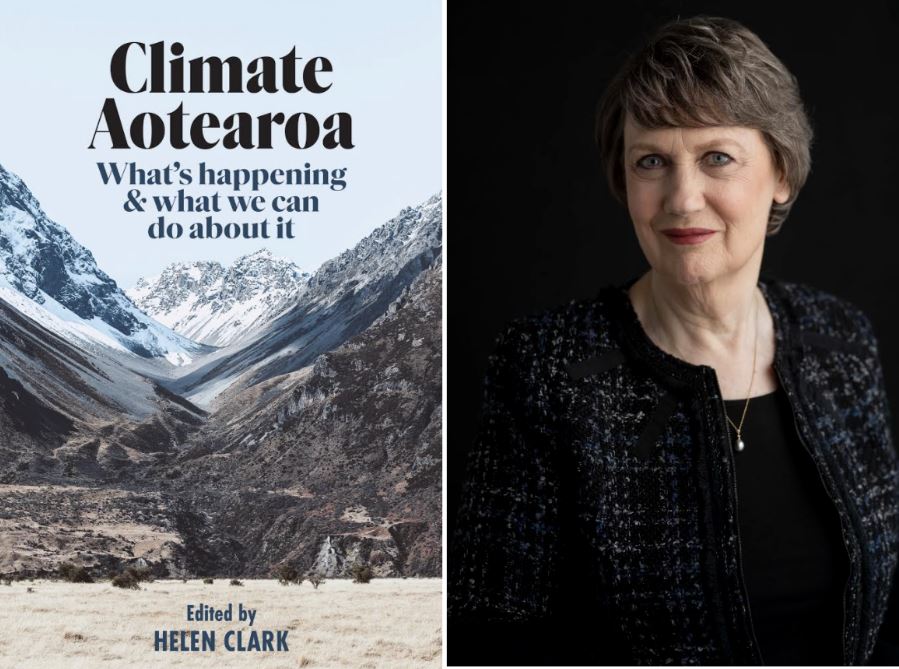 On the Kapiti Coast District Council I’m finding that it’s amazing how, if you have a group of 10 people speaking the same message and sharing the same ideas and vision, how much power they can have, especially when it’s young people, because we have so much at stake.

I think there could be a challenge there, because we still have quite a significant number of local authorities, right? There’s real opportunities to be involved in shaping the future of your local government area and trying to set ambition: why couldn’t we be the leaders of New Zealand on this? Let’s have innovative and practical ideas, things that could be implemented. We’re starting to see it now and it’s not unrelated to climate change that the low traffic neighborhood concept rolled out, which is very exciting.

I for young people who are very highly connected with what’s happening offshore: look at where are the best practices, try and bring it home, see what’ll fly in your own neighborhood and area and then enter the broader political debate, because what we need in New Zealand is a consensus across party about action. The Zero Carbon Bill got almost complete buy-in, right? It’s a long-term target. This crisis is now. We can’t wait until 2050.

If we were to really pull our weight in the world, we need to pretty much half our emissions in the next nine years. It’s huge.

The United Kingdom has set a target for 59% reduction in the next nine years. The EU has set a target for close to 50%. Joe Biden at the Climate Summit [last week] suggested they’ll go to 50%. Now my understanding is that our climate commissioner’s talking about 23.5%. Well, come on. You know?

It’s right here and now and the impact’s already being felt. What led you to focus on climate and with the book, how important do you feel this moment in time is and what role do you see all of us being able to play in creating that cross-party support that’s so desperately needed? Why is this your focus right now?

For the moment in time we have to have a recovery from the catastrophe of Covid. We can make it a green recovery or we can do business as usual. And people should demand a green recovery investment in the things which are sustainable and resilient going forward. You don’t want a whole lot of the “shovel ready infrastructure” which is our roads.

A plan to expand a four-lane highway in South Auckland will take out 600 houses – hello! It’s a commitment to cars and taking out houses? This is not the future we want. So I think young people have to get really involved in articulating what it is that is going to make a difference and make New Zealand pull its weight.

Do you think there are people like yourself or others who have the kind of knowledge and experience that you have to be able to somehow share that with young people? What do you think the role of intergenerational solidarity is in all of this stuff?

It’s interesting you say that because in the international women’s discussion, UN Women has this dialogue running called Generation Equality and they’re encouraging interaction between older ones like myself who have gone through all the hard yards to meet with the younger women, because actually you keep coming up against the same sort of problems whether you’re 21 or older.

So I think encouraging intergenerational dialogue is extremely important because there are plenty of people like me out there. Take people like Jim Salinger, who’s just spent a lifetime of commitment on the greenhouse gases issues. He’s one of New Zealand’s most foremost meteorologists. So, we’re out there and we’re happy to support, we’re happy to be on the webinars, pushing the message and encouraging people to do more.

It’s cool seeing that happen at a local level as well. At the school strike we had on April 9, we had a Seniors for Climate Action group rock up with their banners. It’s definitely coming through strongly.

You asked how I got involved. In the 90s when we were preparing to go into government, the Rio Earth Summit was held. David Caygill went from the Labour caucus and that was where Agenda 2030 came from and so on, but there was never enough action either in New Zealand or globally around it. Mayors like Bob Harvey picked it up. He ran Waitakere City like the big agenda from Rio. But then National MP Simon Upton played a big role in the negotiation for Kyoto Protocol, but he couldn’t get his government to ratify it. New Zealand signed, but hadn’t ratified. And as we were preparing for government and I had Pete Hodgson – MP for Dunedin North was our climate change spokesperson and later minister – we made a commitment that we would ratify Kyoto, which we did.

So really from that period, from the time I became leader of the opposition, we were starting to look at what would New Zealand have to do to meet expectations under the framework convention, and then the Kyoto Protocol. And so, I mean, we had a lot of things coming when I was PM. Someone said, “Do you think he could have done more?”

I said, we actually set a target for being carbon neutral in the energy sector by 2020, from recollection. And we had ambitious targets within the government. And that’s why I said, you’ve got to try and drag everybody with you into the consensus because otherwise you’ll get a head of steam up under one government and we had a head of steam up and then we’ll just all fall flat. We have to have ongoing, consistent effort and we are where we are now because of the stop, go, stop, go stop, go.

How do you think we can convince people who are on the outskirts of this discussion or who might be non-believers that climate change is real and that it’s happening? But also just the people who aren’t engaged with this conversation that maybe should be, for example, frontline communities like those in the Pacific, our indigenous communities, how do we make sure that they’re all connected into this conversation?

Just put it in everyday terms as Kiwis: we build our villages and towns around river mouths and coastlines, right? Not a great place.

No, we’ve discovered that now.

So we’re used to so many years seeing Kaeo flooded. Think low lying suburbs of Whanganui, Whakatāne, whatever, just think: Is this your town? Have you got a beachfront? Where you can be subject to flooding damage? It’s going to happen more often, unless we get a grip on this.

It’s about bringing it home to everyone. Secondly, of course, the impact on our ability to grow food and other crops is quite profound. I mean, we’re suffering now from a much more erratic climate where the rain is not as reliable as it used to be. I grew up in the Waikato and it always seemed to rain. Well, now we see there in most years about drought in the Waikato. Never heard of such a thing when I was a kid! It was very, very rare.

It’s affecting our ability to farm. And in the end, it’s a pretty important part of the economy. Then I’d say: think about the heating of the climate. We have parts of New Zealand which can get terribly, terribly hot. And when things get terribly, terribly hot then you run the risk of heat stroke, dehydration, and that’s as much a challenge for children as it is for older citizens.

Do we really want to live in a world where in parts of the year we just can’t go outside during the day, because it’s too hot? That’s what a lot of people face, but there’s parts of our country which can get very, very, very hot, more often than we’ve ever seen before. And then what if we end up with the introduction of a mosquito, which carries one of the ghastly diseases and thrives in the warming climate, what if some of these gets established here? The health consequences are really quite catastrophic. And then there’s the species extinction as well, because the species we have exists in a certain kind of ecosystem, what’s going to happen to our penguins?

There’s real, real species and habitat protection issues for those who are conservation minded.

I talk about climate action but I talk about a “just transition”, because currently I chair the Extractive Industries Transparency Initiative, which aims to get good governments and get rid of corruption from the extract of sectors. I see a lot of developing countries who are late entrants to the oil and gas sectors, for example. Now the reality is that as the demand for oil comes down with the energy transition, countries are going to be left a bit stranded if they’ve been reliant on that. So there is quite an important function for high-income countries and for investors to be looking at what are the other opportunities to support countries to develop with, because oil used to be the easy money, but if it’s not wanted what else are you going to do to develop your economy and the prospects of your people?

If you’re going to close all the coal mines somewhere, like the Ruhr valley in Germany, you’ve got to think: what are the people going to do? What’s the plan for the area? You have to be thinking about the impact on people and so the people aren’t fearful of climate action, thinking that it will cost them their jobs.

Climate Aotearoa: What’s happening and what we can do about, edited by Helen Clark, is published by Allen & Unwin NZ and available at Unity Books.