We resurrected a library that was shaken to pieces. Surely we can repair one that’s showing its age.

“ … her father took her to the Library. The Library was a massive edifice, an athenaeum, a temple, one of several on the main street with columns at the front carved with leaves, as if the stone went up and up until it could bear to be simple stone no longer and must sprout … The doors to the Library were of glass and heavy polished timber and when they swung to, it was with a flump flump, a sound like velvet. There was the smell of paper and the rustle of pages turning over on the long table where people were reading newspapers …

Each Friday night now she went to the Library … The flump flump of the double doors, the muffled voices … The rubber stamp leaves blurred blue numbers on the end paper. The people choose what is real and what is just a story. Then they carry these things home, free as mushrooms from an autumn hillside, free as blackberries among the broom and wild roses on the banks of a swirling milky river, free as Christmas plums on a wild tree.”

There is a lot in Book Book that is not real. It’s a novel, after all. But that visit to the Ōamaru Public Library is exactly as I recall. My dad was a meter reader. There wasn’t a lot of money to buy books, but we were a reading family. Library books were piled by each bed, beside the bath and on the dining table where we propped them against the teapot and read, rather than risk the conversations that would turn inevitably to argument. Library books were our salvation, our way out, our way up. 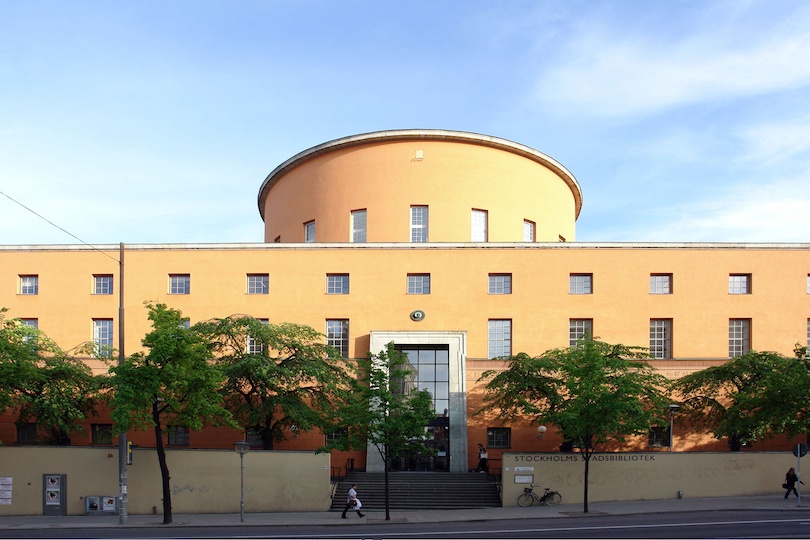 There have been many libraries since Ōamaru. Beautiful libraries, like the Bodleian where luminous reading rooms float above a subterranean labyrinth. Or Gunnar Asplund’s Stockholm Public Library, a 1920s geometry of cylinder and rectangle in an architectural style called “Swedish Grace” that does indeed confer grace on the simple act of borrowing a book. There have been the great collections of my own country: the National Library, the Alexander Turnbull, the Hocken, Macmillan Brown and Sir George Grey, each with its treasury of word and image. And there have been the regional libraries in every place I have lived, in Palmerston North, Christchurch, Akaroa, Auckland, Dunedin. Libraries that continue to deliver to anyone and everyone a way up, a way out.

Libraries are many things to many people, but for me as a writer, they have been primarily a resource, like Mitre 10 for a builder or a patch of bush for an eager botanist. Their contents have formed the foundation for everything I have written over 30 years. The internet has its uses, but the things I read online always feel curated, universally available, ordinary. I encounter everything in an identical format, on the same screen, with the same levels of light and intensity. A library shelf lined with books, however, is eccentric. A book is such a perfect geometry, narrow and rectangular, to contain fact or fancy, word or image. A library shelf presents the possibility of random juxtapositions, discovery, surprise. I value that.

For a decade I watched the reconstruction of Christchurch’s central library after it was flung into the air in 2010 and 2011. The old library was never a beautiful building, having had the misfortune to be built in the 1980s when grace of any kind was out of fashion. But it was superbly accessible. You walked directly into the collection from the street, children to the right, adults to the left or upstairs to reference and the New Zealand collection at the head of a squawky escalator.

Then it shook to pieces. Books butterflied onto dusty carpet and the librarians set to a miracle of improvisation, operating a service from temporary premises around the city. They kept it going while dealing with their own damaged homes, unregulated insurers and all the normal vicissitudes of life. In the post-quake city the library became a haven of continuity and order in the midst of disorder. It offered the reassurance of an armload of books to children traumatised by abrupt change and destruction. It served as a de facto day centre for the homeless driven out onto the streets by a couple of decades of political reforms capped off by tectonic upheaval. It continued to offer writers like me the resources to carry on working, and the assistance of its highly skilled librarians. The new library took shape in the Square. I looked at the architects’ drawings on the scaffolding, read the words outlining the vision. Oddly, the words “library” or “whare pukapuka” were nowhere to be seen, nor were “books”, nor “fiction”. Instead, the planners promised “research / study / meetings / collaborative learning / community arena / events / whānau performances / interactivity / makerspace / stories / gaming”. On the ground floor a cafe and retail space were proposed “to draw people in”. The drawings showed an airy atrium where people strolled. No one held a book, let alone an armful. A single bookshelf in the background was the only sign that this might not be an airport or hospital foyer. I stood looking at the vision feeling redundant, like the last remaining reel to reel tape recorder, or a slide projector, or curling tongs.

Now Tūranga is built and it is indeed a beautiful building with its facade pleated like the quires of an unbound book, its central staircase and brightly-lit spaces, and it is crowded and humming, day and night. Words in many forms, spoken and written, are again at the heart of the city and that can be nothing but wonderful.

I live now in Dunedin. It is a Unesco City of Literature with many libraries, great and small. But my favourite is a ramshackle affair in the Octagon. The Dunedin Athenaeum and Mechanics Institute is the oldest continuously functioning library in New Zealand, dating from 1851. It is definitely not beautiful. It is disheveled after decades of neglect. Massive cracks zigzag through the basement walls and an average earthquake would reduce it to a pile of rubble. Nor does it house a notable collection. Instead its shelves are crammed with the popular reading tastes of the past century: crime and romance and war and Dick Francis. It is neither free nor public, but charges a fee for members. Currently they number 70, a sad decline from the glory days when those aspirational mechanics could be persuaded to tramp muddy streets to borrow a book or attend an edifying lecture on The Current State of Europe or The Development of Moral Character in Young Men. Back in 2007 the city council sold the building to a developer who is planning a major refurbishment. It is unlikely to return as a library.

The Athenaeum’s days as a lending library may be coming to an end, that function rendered obsolete anyway by the wonderful free public library across the road. But I would like to see it rise nevertheless from the ruins, as Tūranga did, as a centre celebrating the power of words in this country, whether they have been spoken or written.

A thousand years of words.

One hundred and seventy years of libraries.

That, I think, is worth celebrating.

This text was originally commissioned by Public Libraries of New Zealand under editor Mark Amery.