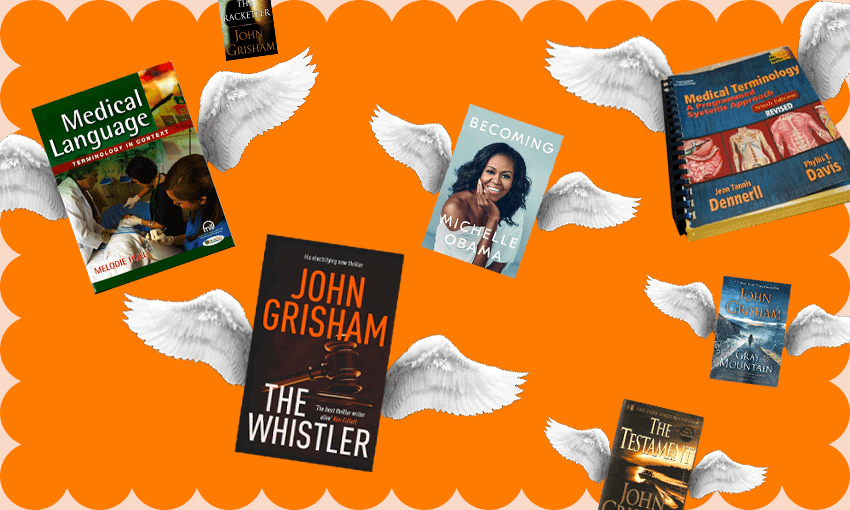 Their catalogue records burned out long before their legends ever will (Image: Tina Tiller)

Their catalogue records burned out long before their legends ever will (Image: Tina Tiller)

Every year libraries are forced to cull thousands upon thousands of books to make room for new stock. Alex Casey investigates their final resting places.

Everyone wants John Grisham until they don’t. There are currently more than 100 copies of his 2021 legal thriller The Judge’s List throughout Auckland City Libraries, but you only need to look to history to see how dramatically those numbers will dwindle in coming years. For example, his 2019 outing The Whistler – “a high-stakes thrill ride through the darkest corners of the Sunshine State” – now has only 28 copies available, and 2009’s The Associate – “if you thought Mitch McDeere was in trouble in The Firm, wait until you meet the associate” – has a mere five.

Anyone familiar with op shopping will know that popular titles dominate the book section, meaning it is a rare experience to enter any store in the country without encountering The Da Vinci Code, The World According to Clarkson, or Fifty Shades of Grey. And our libraries are facing the same issue. Every year, libraries across Aotearoa have to deselect thousands upon thousands of books to keep up with demand for new titles and maintain storage space.

As necessary as it is – Tāmaki Makaurau alone purchases about 386,000 new items a year – Auckland Council head of library and learning services Catherine Leonard says that it is a part of the job that never gets any easier. “We really do have to steel ourselves,” she says. “For us, it is not just the book itself but the work that has gone into acquiring it, describing it, cataloguing it, and shelving it – it really feels like it has a bit of a life.”

Although she finds it sad, Leonard says this is the reality of the library book life cycle. Libraries in Tāmaki Makaurau contain over 3.2 million items, clearing out an average of 10 per cent a year, or 320,000 items. “As with all public libraries, we are in a continuous cycle of renewing collections to keep them fresh and engaging for our customers,” Leonard explains. “When we see that items are no longer in demand, we will look at the number of copies and decide if we keep a small number or maybe just one for the whole region.”

Grisham aside, another recent title she says has found itself on the chopping block is Michelle Obama’s 2018 autobiography Becoming. “When that came out we couldn’t keep up with the demand and we ended up with over 100 copies, says Leonard. “But once the demand dies off it is a question of ‘do we really want to try and store 100 copies of this?’”

When it looks like a library book’s life is coming to an end, Leonard says there are strict assessment guidelines in place to ensure libraries are being “responsible and consistent” with how they are operating. Books are not only assessed on reader demand, but on what could be useful for future research or heritage purposes. “We’re really dubious of getting rid of the final copy of anything,” says Leonard. “Even if the condition is so poor that we couldn’t have it in the lending collection, we would still put it in the back catalogue and attempt to find replacements.”

Alas, there are some items that are simply too tatty, too damaged, too out of date or simply too prolific to warrant a spot backstage. These unlucky books face three possible fates – book sale, donation or recycling. Leonard says the community library book sale has been an exceptionally useful way of shifting old stock, with the Central Library Friday morning sale garnering lines out the door. Unfortunately since the arrival of Covid-19 in 2020, Auckland libraries haven’t had their regular book sales. “It just didn’t feel very appropriate for the times.”

Although Covid has meant that fewer library books are being sold off to the public, it has strengthened a new weapon in the ongoing storage battle. “The use of our ebooks has significantly increased in the lockdowns, so that’s been huge for us,” says Leonard. In the second long lockdown, there was a dramatic spike in children’s ebooks being hired out compared to the first. “It was really gratifying to see that people were making use of our children’s online collections to keep their kids entertained and reading,” says Leonard.

Given that ebooks require no shelf space and do not have to be returned – they simply disappear from your device when the time is up – Leonard says they can be a useful solution to a lack of physical storage. That is, they can add an extra link to the chain between purchase and disposal. But popular ebook titles have to face the same brutal guidelines when their time in the sun is up. “The supply of ebooks really is a copy per customer, so we have to do the same sort of balancing act when it comes to demand for our ebooks as we do with our physical books, which sounds weird when you are talking about something digital.”

The next avenue libraries go down is donation. Auckland libraries have arrangements with a number of organisations including Auckland City Hospital, Mt Eden Prison, Women’s Refuge and a selection of local rest homes. “As you can imagine, we have to think carefully about what is appropriate for each of those. For instance, we wouldn’t want to donate a medical text with outdated information to the hospital, whereas Women’s Refuge is very interested in children’s material.”

Corrections’ chief custodial officer Neil Beales says book donations from both libraries and the public are a hugely important educational tool in prison facilities across the country. “The prison libraries are well utilised, and we’ve found people in prison have extremely positive experiences,” he explains. Genre reads such as fantasy, science fiction, historical fiction, crime and thrillers are all in high demand, as is non-fiction based on New Zealand and Māori history.

He cites one example from the book club run in Rimutaka Prison, where one participant enjoyed the Paul Woods book How to Escape from Prison so much that he didn’t want to give his copy back to the library. “This is the first book that the man had ever finished and he felt that by giving it back he was losing a friend,” says Beales. “This particular book club participant is now studying for NCEA level one.” (NB The book is about mentally freeing oneself from prison).

If the deselected books can’t be sold off or donated, it is – prepare yourself – into the bin with them. The plastic covers are removed, the barcodes are cut off, and the unwanted books cascade into their papery mass grave in what Leonard describes as “just your regular big recycling bins”. Auckland Council does not have data on items donated or disposed of, but assures that “all withdrawals are done in accordance with our assessment and disposal guidelines”.

The death of a library book remains a thing that some librarians have a harder time with than others. “Some are grateful to be able to create some space for the new books that are coming in,” says Leonard. “Others can feel like it’s not just the pages and the print, it is the ideas and the stories inside them that you are disposing of.” That reminds me, I’ve got a pristine copy of Michelle Obama’s Becoming that I feel bad about getting rid of. Would the library like it?

“No thank you,” says Leonard. “We’ve got quite enough.”