Editor’s note: The book’s also about kiore and ship rats, mice, mustelids, rabbits, cats and hedgehogs, and it’s terrific. This excerpt has been abridged for length.

Norway rats are large, tough animals adapted to cold, wet conditions. They are very good at swimming in cool water and digging burrows, but they are too heavy to be good at climbing. On land, generations of rats have gnawed through solid wooden barn doors to get at stored grain. At sea, they thrived in the damp, unheated cargo holds of sailing ships, finding feed and shelter in inaccessible corners well out of danger from crew, fumigation or ships’ cats.

Ships of the early 19th century were constructed of natural materials (timber for hull and masts, and flax for cordage and sails), all eminently gnawable. Wooden structures, sails and rigging, even the interior of the hull itself, were all defenceless against a rat’s sharp incisors. Contemporary records frequently mention the damage done by stowaway rats, which were never named, but were probably all Norway rats.

Rodger’s detailed description of the British Navy of the Georgian era (1714–1830) comments that:

Rats were always present, and always hungry, [and, along with scorpions, centipedes and other pests which were regarded as] native to the wooden world. Whenever stores of any sort were missing … and had to be accounted for, the standard explanations were “lost overboard” or “eaten by rats”, and there was virtually nothing which could not plausibly have gone one way or the other.

Rats could easily destroy most of the easily accessible sacks of dry provisions on board. Meat packed in wooden casks was better protected, but that made it only slightly more challenging. In the days before any efficient means of preserving perishable food had been invented, the usual way to keep meat edible during a long voyage was pickled in salt. Rats could gnaw through the casks to get at the meat, and even if they did not eat it all, the leakage would allow the rest to spoil. 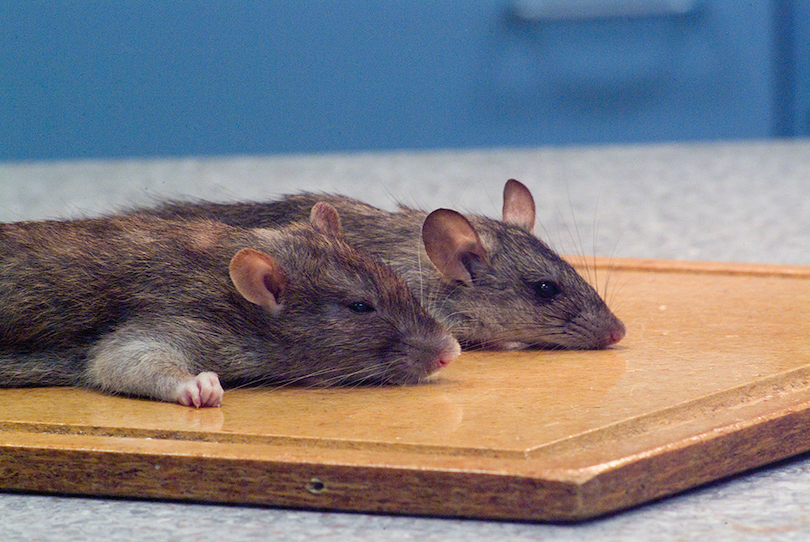 Portraits of a Norway rat (front) and a ship rat (Photo: Bruce Patty)

Rat-infested whaling ships, whose very timbers must have been redolent with delicious-smelling oil and strewn with scraps of blubber and meat, cruised around the coasts of New Zealand for decades between the 1780s and 1830s. Their generally filthy condition supported hordes of cockroaches, which in turn supplied abundant additional food for rats. Living quarters for the crew on one of the worst, the Julia on a whaling cruise in the south Pacific, were described by Herman Melville as bad enough already, without the additional misery that:

we had not the undisputed possession of them. Myriads of cockroaches, and regiments of rats, disputed the place with us. … it is almost impossible to get rid of them … the vermin seem to take possession, the sailors being mere tenants by sufferance … [On] the Julia, these creatures [the cockroaches] never had such free and easy times as they did in her crazy old hull; every chink and cranny swarmed with them; they did not live among you, but you among them … [The rats were] tame as Trenck’s mouse, they stood in their holes peering at you like old grandfathers in a doorway. Often they darted in upon us at mealtimes, and nibbled our food. [Baron von der Trenck was an imprisoned Austrian military officer who had a tame mouse as a companion.]

Fumigation was almost the only method of cleaning out the rats from the hold, and even that, as Melville noted, didn’t work very well. It was also dangerous to the crew. The master of the Lancaster, an American whaling ship from New Bedford at anchor in Kororāreka, accidentally caused the death by suffocation of one of his own crew while the ship was being fumigated for rats.

The ships maintained and manned by the Royal Navy may have been kept somewhat cleaner, but even they could not escape their unwelcome passengers. A large part of the reason why not is that they routinely carried their fresh meat on the hoof. For the sake of avoiding months of dependence on salt pork, ships carried live cattle and sheep, pigs and goats, hens and geese in great numbers. The noise and mess they made in the already crowded accommodation below decks was disruptive, but accepted as part of everyday life for officers and men on board. Somehow, they managed to combine the disciplined efficiency of a man-of-war with large elements of the farmyard and travelling circus. Rats were, of course, the inevitable beneficiaries of these chaotic arrangements.

After a long voyage far from any port, a ship’s hull would accumulate a heavy load of weed and barnacles that could easily become a drastic brake on its speed. Then, the captain would look for a safe opportunity to beach the vessel in order to careen it. On James Cook’s first visit to New Zealand, he took the chance to careen the Endeavour on the beach at a quiet anchorage in Queen Charlotte Sound. The crew laid the hull over on the larboard (port) side, scrubbed the bottom clean, then righted it and laid it over on the starboard side for scrubbing, before finally righting and re-floating it. The whole procedure took three days, from 16 to 18 January 1770, thereby providing the absolutely ideal conditions for rats to reach the land. No one thought of the possible consequences for native fauna, or preventing them from leaving the ship, even had that been possible – on the contrary, it is more likely that the crew would help them go. During Cook’s second visit to New Zealand, he brought the Resolution close in to shore in Dusky Sound in March 1773, and made use of a fallen tree trunk to provide a handy gangway for the crew and their animal companions to reach the land. The Resolution was certainly “much pestered” by rats, and therefore, also carried cats, so Cook was glad to see that “the vermin could walk ashore across the bridge”. He could hardly have made it easier for the first of the four-legged Europeans, Norway rats and cats, to reach the previously inaccessible Fiordland forests which his companions described so well. Cook could not at that time have guessed the massive scale of the consequences that could follow, but at least one member of his ship’s company was apprehensive. Anders Sparrman was working in Cape Town when Cook arrived in 1772, and was invited to join the crew as an assistant naturalist to Johann and Georg Forster. In Dusky Sound, Sparrman noticed with regret the exodus of alien animals from the Resolution.

In May 1773, Cook moved the Resolution north to meet its companion the Adventure in Queen Charlotte Sound, where Pickersgill’s log records the “Sailmakers repairing Sails which we find much damag’d by the Rats”. Meanwhile, William Bayly, the astronomer aboard the Adventure, cleared a patch of bush for his observatory. Sparrman commented on the abundance of rats in the disturbed area. He was “mortified at the thought of being responsible for introducing such animals”.

Throughout much of the 19th century, Norway rats continued to take over New Zealand in their millions, setting back human endeavours across both main islands. In 1840, a Sydney firm attempted to establish a rural farming settlement at Riccarton, now part of suburban Christchurch. They sent a manager, two farmhands and two teams of bullocks to plough and sow a 30-acre block. Within less than a year, they abandoned the effort after “numberless rats attacked the garnered stores”. Remains of mummified rats have been recovered from under-floor and ceiling spaces of historic buildings in the Bay of Islands, including the old school room in the Stone Store at Kerikeri, and in Pompallier House in Russell. Mummified rat preserved at Pompallier House, Russell, resting on a dishcloth stolen from the kitchen. The case label identifies it as a ship rat, but the large size, small ears and short thick tail are much more typical of Norway rats. (Photo: Carolyn M. King)

Some European observers recounted their experiences in chilling detail. In 1877, the hordes of rats pestering the early settlers in Otago were described by R. Gillies, a Fellow of the Linnaean Society and member of the Council of the New Zealand Institute:

Wherever you pitched your camp away in the wilderness, where never human foot before trod, there rats would be as abundant as near the settlers’ homes … in the Taieri Plain near Otohiro in the year 1852 [I saw] rats running here and there in all directions from the horse’s feet. When a new settler settled anywhere alone … the rats … stole everything from him … [when camping] we got so accustomed to the rats that we never felt inconvenienced by feeling them running … even on top of us as we lay in bed. So tame were they that when the candle was lit in the tent they would come peering in at the door or under the curtain looking at you straight in the face with their earnest sharp gaze, and would only go when you shied something at them.

Andreas Reischek, an Austrian explorer and collector who came to New Zealand for two years in 1877 and stayed for 12, visited Chalky Sound in Fiordland, where he found the forest swarming with brown rats.

At night they kept me awake with their noise, knocking things down from the walls, gnawing at my stores and digging holes round the hut. They dug up the potatoes in the garden and dragged them away … they used to gnaw our books before our very eyes … these rats are the great enemies of birds, and any bird living or breeding near the ground has but a small chance of existing. They play havoc alike with eggs and young, and even attack the parent birds.

Eventually, towards the end of the 19th century in the South Island, astute explorers and surveyors like Charles Douglas began to notice an unexpected change in the rampant rat populations of the bush. While engaged in surveying work in the valley of the Waiho River in Westland in 1893, he reported that:

The Norwegian rat … which swarmed in the country at one time, is now becoming extinct from some cause or other, and the native and black rats are taking its place – two animals perhaps not quite so destructive as the grey gentleman.

The “two animals” mentioned by Douglas were, at that date, more likely to have been the brown and black forms of the ship rat, and alas, the exchange of personnel was anything but good news for the birds.

Invasive Predators in New Zealand: Disaster on Four Small Paws, by Carolyn M. King (Otago University Press, $50) can be ordered from Unity Books Auckland and is available from the Wellington store.