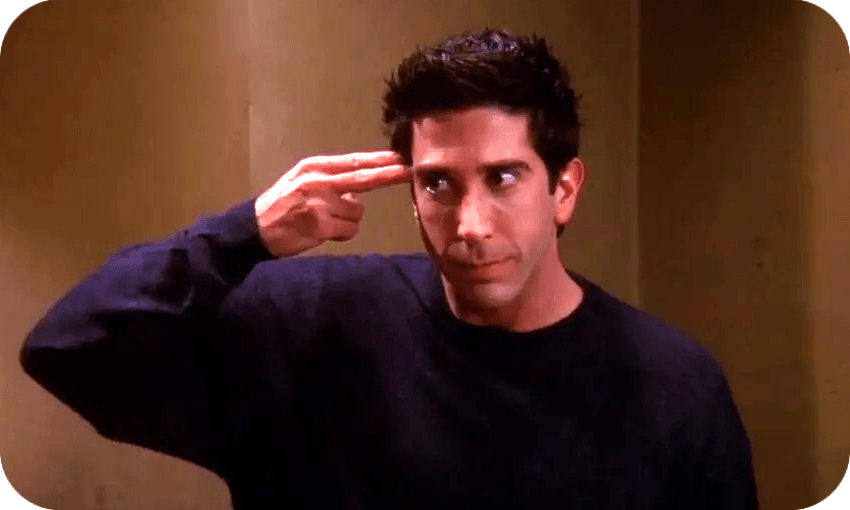 The Friday Poem: I Wish I Knew Hera Lindsay Bird, by Tim Grgec

By Tim Grgec
Guest writer
Made possible by

Ross
Ross
Ross
Ross
Let me get started on Ross
Ross from popular sitcom F.R.I.E.N.D.S
Ross is one of the worst characters in the history of television
He makes me never want to visit a museum again
He makes me want to call my ex-girlfriends
and tell them how they all deserved better, how Rachel deserved better,
which is exactly something Ross would say
as he pretended to drink coffee from an oversized cup, staring pathetically
at nothing in particular
He was married to a woman who didn’t love him, who loved a woman named Susan instead
which despite the loving and all her not loving
it was her loving another woman that he could never seem to accept
After that he almost married Emily, who seemed to love him too
until Ross said another woman’s name at the altar, Rachel’s,
humiliating his soon-to-be wife in front of all her friends and family
Perhaps he was unconsciously saving himself from disaster —
being married to someone he didn’t actually love,
which is understandable,
it was just how he went about it:
in the most cruel and thoughtless way imaginable,
like saying another person’s name during sex
that’s being live streamed to the whole world,
or breaking up with a long-distance partner
only to find out their existence was an online hoax
thought up by a thirteen-year-old in Arizona

Like Ross, I used to pride myself on not watching TV
I announced my sensibilities to the world, made them obvious,
like reading in public in the hope I’d be interrupted
by a woman who would be both bookish
and (coincidently) strikingly attractive
These imaginary women could never be as intelligent as I was
and, despite wearing glasses,
they always adhered to the impossible expectations of beauty
placed on female love interests in early 2000s sit-coms
And we would talk of art, watch films with subtitles,
and I would make them and everyone around me feel guilty
for my awkward adolescence —
my high-school insecurities coming back from the PE changing room

My last real girlfriend was someone who started off as a friend
And for years she thanked me for what a great friend I was
as I baked her cakes for no reason
and quietly noted the bands she was into
so that, over time, we had the exact same taste in music
In those days we talked endlessly,
so in love I finished her sentences,
as we made fun of other couples
who watched television to fill
the evening silence

Even now I still think about this friend turned girlfriend,
her eyes reflecting the light of the laptop
when she told me she was moving out
We’d been talking about F.R.I.E.N.D.S until then, specifically,
the relevance and appeal of a twenty-year-old show
about six morally questionable yet objectively attractive friends
navigating their late twenties in New York, much like we were doing then,
only not in New York
In these moments I have to catch myself from messaging her
with a memory that to me seems pertinent and charged with meaning
and therefore perfectly appropriate to bring up
years later, like finally getting around to that mushroom dumpling recipe
she always wanted to cook
in a “this reminded me of you…and…while I’m here,
I hope social netball is going well” kind of way, even though she might not
be playing social netball anymore…
my lonely life around me like a ghost
haunting the last spots on earth he walked on

Ross
Ross
Ross
Ross
Ross from popular sitcom F.R.I.E.N.D.S
is the character my friends tell me I’d be
if I were a character on F.R.I.E.N.D.S
He once dumped a girlfriend because she shaved off her hair
He once lied to Rachel about getting their marriage annulled
because he couldn’t face being divorced three times
He cares about what everyone thinks of him
which is probably the main reason people think of me when they think of him
And it’s only because I care that I feel the need
to still be near her — my once friend turned girlfriend —
occasionally passing by the supermarket so I might
catch a flash of her blonde hair slipping down an isle
Other times I read at her favourite cafe
thinking if I could just go back to that version of her, and of me,
that things might’ve turned out differently

Sometimes I wonder if, even now, there’s still time to make a dramatic gesture
like Ross following Rachel to the airport before she flew to Paris
for a promising and lucrative career opportunity,
providing a situation for him
to not only declare his love, but also take advantage of
the collective pressure of everyone else around them —
like proposing to a lover at the halftime of an American basketball game
More dramatic still would be if my once friend turned girlfriend
had already gone through customs,
in which case I’d have to buy a plane ticket, running
to the departure gate with a breathless endurance
and the expectation, I suppose, that she would decide to stay
(forgoing everything she’d been working towards)
because of my continued love for her…
and not to avoid the possibility of sharing
a long-haul flight with an ex-boyfriend
in the timeless, infinite night

The Friday Poem is edited by Chris Tse. Submissions are currently closed and will open again soon.