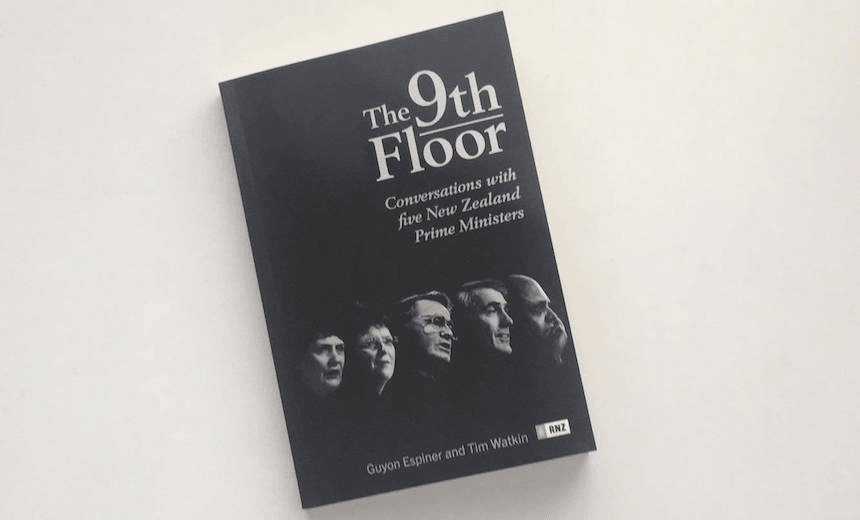 Like the podcast, but a book! While that sounds boring and pointless, Duncan Greive controversially argues that it’s actually good.

I found the 9th Floor “urgent and revelatory” upon its release in April and May, writing somewhat pompously that it “strips our recent political history of much of the distracting rancour which accompanied it in real time, and allows the key participants to speak with precision and hindsight about what drove their decision-making.”

Not everyone feels that way. The Pantograph Punch’s Joe Nunweek yesterday beautifully articulated the counter-argument – that it was an artfully constructed opportunity for our leaders to gloss the real consequences of what they oversaw, “full of dozens of infuriating and tone-deaf moments on the part of its subjects”.

That the same object – five interviews with five former New Zealand prime ministers – could drive such wildly different responses speaks to its power and importance: we live in a world these people shaped every day, yet very rarely hear the critical decisions discussed by those who made them.

The podcast was also filmed for RNZ (in October it will air on Three), and now it’s a book by the shockingly productive Bridget Williams Books. There’s a bit more to it to justify the format shift: an essay from producer Tim Watkin, who describes these as “legacy interviews: not… of their lives, but of their time running the country”, and short introductions from host Guyon Espiner. Other than a few extra questions, some stills and a shiny black cover, that’s it.

And that’s all it needs to be. These interviews deserve to persist, and remain accessible for reference long after podcasts and video might have drifted off into the digital scree. They take in such momentous decisions, which will rightly be debated and referred back to for decades to come, that how those decisions were and are justified really matters.

You can choose whether to believe Bolger’s assertion that he was “angry at the lies” which had been told about the balance sheet in the 1990 campaign. Those sympathetic to him will view every hard choice made subsequently as driven pragmatically by the realities of the books he inherited (the last, incidentally, which could be a surprise – last week’s scene-setting PREFU came from the law his government subsequently enacted).

Others will see a ruthless ideological opportunism which didn’t waste a crisis to ram through benefit cuts and other reforms, and view his critiques of those reforms as all together too little, decades late.

Convincing arguments can be made for both positions. The beauty of the 9th Floor project is that it provides unparalleled source material for each to construct their arguments. And to better understand both the nature of the choices facing those in power and the character of those who rise to wield it.

Weeks away from an election, one which feels loaded with generationally significant portent, that’s a gift. And even if the book adds relatively little to that which has already been released, the 9th Floor is that rare project significant enough to not feel remotely gratuitous in its continuing parade across formats.