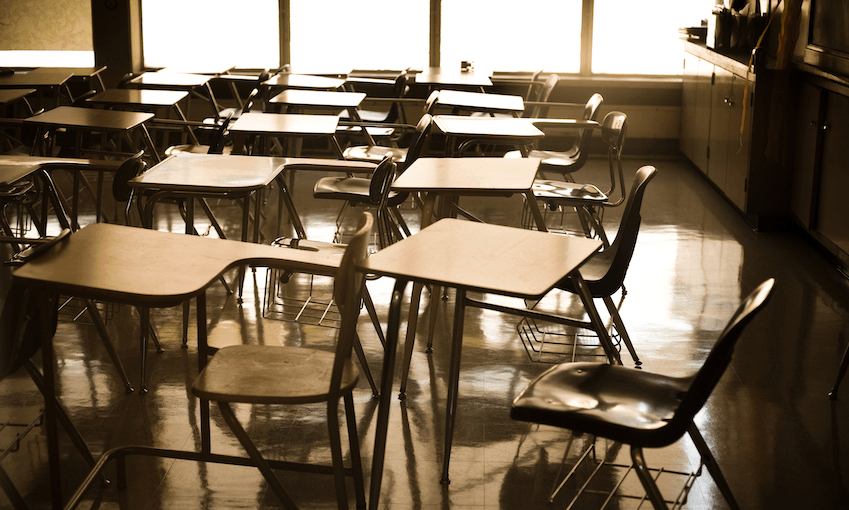 I wrote a controversial play for kids. Here’s why

Young people understand more than we think – and we as authors should write like it, argues David Hill.

This essay discusses the suicide of a young person. Please proceed with caution.

Near the end of my high school teaching years, my Year 12 English class included a pleasant, responsive boy whom I shan’t be naming. He was a reader, which instantly lifted him several notches in my estimation. He’d sometimes stay for a minute after lessons, tell me about this new title he’d found, ask if I knew it. Nice kid.

His home life was appalling. Physical and mental abuse, crime, every damaging substance you can name. Welfare agencies stepped in to try and help him sometimes. School was pretty much his only safe and structured environment.

Somehow, he was surviving. He had friends, was good at his chosen sport and in his subjects. He had his books and reading. Our fingers were crossed for him.

Came the Friday afternoon when I’d just finished teaching his class. They were filing out and the Year 10s were shoving in, with the inevitable unarmed combat in the doorway, when I became aware he was standing by my side. “Won’t be a minute,” I told him.

I was two minutes. By the time the Year 10s were settled, he’d gone. He went home, and during the weekend, he died by suicide.

I don’t know what he’d been going to tell or ask me. I assume – I hope – it was about a book. From what we heard later, unspeakable things had begun happening to him again, in a house where all morality was abandoned.

But of course I wondered and worried, and a few years later, when I was out of teaching and into fulltime writing, I began a play which focuses on a teenager so tormented that he considers killing himself. I called it Ours But to Do, a clumsy riff on Tennyson’s lines in Charge of the Light Brigade.

I included the elements I’ve used in all my plays for kids: large cast so a whole class can participate; short speeches; frequent scene changes; protagonists the age of the readers, relationships of various sorts.

For this one I also read everything I could find about youth suicide, talked to medical and welfare professionals. I made sure that the plot included ways of finding help, support roles for friends and other peers. I left the ending ambivalent: does the boy take that awful last step, or doesn’t he? Different productions have pointed the play in different directions.

The first two publishers didn’t want it. The third hesitated, consulted, requested changes, consulted again, accepted. Thirty-plus years on, Ours But to Do still gets performed, and each time, there’s controversy.

Copycat concerns are raised. Boards of Governors have stepped in and stopped productions. Letters to principals, media, the publishers, the author, accompany every staging. Well-informed people – and others – take sides. Paradoxically, the times my play has been banned have probably meant that the whole youth suicide issue got more coverage than if it had been performed.

You get used to such responses if you write for children or teenagers. Critiques of your work evaluate not only your literary skills, which is appropriate, but also your moral standards, which is … interesting.

I’ve been called “depraved … disgusting … foul-minded”. One parent wrote that s/he had thrown my book in the rubbish, where it belonged. Another announced that s/he would be praying for me, which kept me twitching at overhead noises for a few days.

I don’t mean to sound flippant or dismissive. I’d far sooner have parents involved in their kids’ reading and viewing than uninterested. I understand that many adults – and it’s always adults who call for such bans – are moved by a wish to protect what they see as vulnerable, impressionable audiences.

I accept, too, that teachers and school principals are in a particularly invidious position. And I know there’s a spectrum of offensiveness, with extremes that deserve careful attention.

But temperamentally as well as professionally, I’m uneasy with a lot of censorship. I agree with Aussie kids’ writer John Marsden that protection can be the first step towards repression. I feel that many adult custodians view childhood as a pre-lapsarian Eden, where all children are innocent all of the time. They want them to stay there, protected, unsullied, unaware, so any material which is seen as threatening this perceived innocence is greeted with outrage.

I’ll also point out that all the writers for kids or teenagers whom I know are censored already – by themselves. They know what’s appropriate. Every sentence, they make professionally informed decisions on what to include or omit. Editors and publishers add extra layers of care.

I wrote Ours But to Do because I wanted to acknowledge that Year 12 boy’s courage and potential, to lament his end. It’s the sort of impulse that in different ways has started off a lot of my novels and stories for younger age groups.

I believe that if handled responsively and delicately (and I’m aware of the weight in those two adverbs), narratives about such issues can help young readers recognise and vicariously work through problems, crises, experiences, within the safe and reassuring framework of a story.

I’m glad I wrote the play. I felt – still feel – that my choice was either to honour that young man or to ignore him. Actually, it wasn’t a choice. It was an obligation.