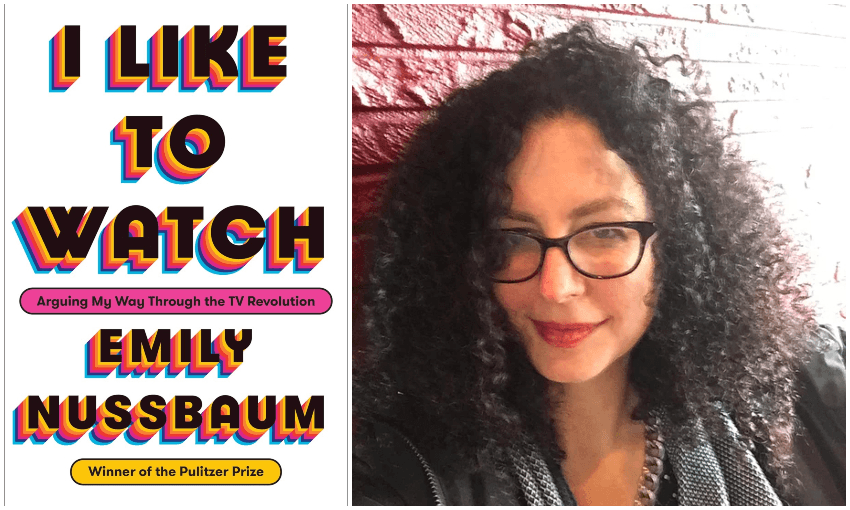 Review: Thank god for Emily Nussbaum, the critic who loves TV like a fan

Simon Sweetman on a collection of essays by Pulitzer-winning critic Emily Nussbaum, who righteously resurrected Buffy the Vampire Slayer – and, at her best, is unafraid to thoroughly critique herself.

What Emily Nussbaum knows is that dressing up to eat a burger and pay double is fine sometimes, if it makes you happy. But what a lot of us love is a glorified cheese toastie, preferably eaten while wearing our trackies. And so, she gives equal attention to Sex and the City as she does The Sopranos, picking each apart and serving them up in The New Yorker.

“For television reviews written with an affection that never blunts the shrewdness of her analysis or the easy authority of her writing,” the judges commented, on awarding her the 2016 Pulitzer Prize in Criticism.

But Nussbaum is not just an astute critic. Her collection I Like to Watch proves she’s also an astounding essayist.

The hinge of this book – and I really believe it could have been (and perhaps should have been/might still be) published as a standalone mini-volume – is an essay exploring the #MeToo movement. Nussbaum approaches it without hint of a correct answer; she’s interested in the question. This is a thinking-out-loud essay, the words delicately shaped, as is her way. Her central premise might be to remind us that “we are all creatures of the art we care about, even if we decide to throw it in a garbage can”.

Conflicts run deep in this essay, and in this book, and rather than toss those conflicts aside, or relegate them to 400 words and the hit-and-hope way of the old broadsheets, Nussbaum wants to work through it all. Not just for us, and not just for herself. She’s acutely aware of audience – but she’s also interested in her own attachments. Viz: the mere mention of Woody Allen or Louis CK is a triggering offence in some circles now. But Nussbaum grew up with the prose and films of Allen. She was a (cautious) fan of some of CK’s comedy. And she writes here to try to understand what it means to throw away the work of a hero. She might be able to toss most of Allen’s books and films in the garbage can but she still cares about the ones that made their mark at an important time in her life, and in a profound way on a precocious mind. In taking us on this trip she stops by to visit Hannah Gadsby’s talk-of-the-town Netflix special from last year and various other cultural barometers.

This essay is the smartest, most in-depth, least histrionic set of words I’ve read on the subject. And she guides you in an assured way. It’s not so much that you have to be nodding in agreement, but you’re never violently shaking your head in rage – even as Nussbaum tells you that she has enjoyed that great taboo of our time, the rape joke, at least once and maybe even twice. Her chief weapon here is context. She remembers when cognitive dissonance was more than something strangers yelled about online, variously in tones of hope and rage.

On either side of this startling essay are recommendations and reappraisals of favourite (and not so favourite) TV shows across the last two decades. We start with examinations of a critical darling that has cast a long shadow (The Sopranos) and a fan-fave that’s now viewed viably as a modern classic (Buffy The Vampire Slayer). Of The Sopranos’ finale, Nussbaum tell us it “was the first series that dared us to slam the door, to reject it. And when we never did, it slammed the door on us: a silent black screen, a fitting conclusion to a show that was itself a bit of a long con, that seduced us as an audience, then dismantled its own charms before our eyes.”

Her love of Buffy is why we have this book. It was her invitation to the dance, the reason she has spent a quarter-century unpacking and understanding television. And it’s joyous to read her appraisal of the show as nothing close to a guilty pleasure, instead as a triumph of taking mediocre source material and imbuing it with the right tone and taste, ultimately zeitgeisting the shit out of that particular (and particularly uncertain) era of television.

We’re all autodidact-ing our way through life as we curate our own content in music, film and TV streaming, in social media feeds, in the articles we click on and the ad algorithms we thereby set in motion. Nussbaum remembers the time when we weren’t all curators of our own media diets. She also remembers the ways in which we – kinda – always were.

At times reading this book is like sitting down for a Skype chat with a new friend. You’re learning their taste and motivations; you like what you see and read and hear.

On Sex and the City’s reputation: “[it] has shrunk and faded, like some tragic dryclean-only dress tossed into a decade-long hot cycle”.

On True Detective’s smug lack of charm: “Which might be okay if True Detective were dumb fun, but, good God, it’s not; the show has got so much gravitas it could run for president”.

Conflicts, dualities, dichotomies flow through I Like to Watch. Nussbaum is on nothing close to a Told You So crusade; she’s just trying to set up a simple framework. Good shows, good work – stuff that makes you feel good, either about yourself, or the world you’re living in, or the people involved in creating it – is what gets the big tick. People taking the piss, not even taking a giant swing but still missing – that’s what makes you cross.

She argues for better representation and sets out the uneven playing field when it comes to gender in television: Men are allowed to be macho and that’s meant to mean something. Women are expected to be low-key, in support. Step out of line and she might be called a bitch. Maybe something worse.

Another essay illuminates this brilliantly. A tender portrait of Joan Rivers, an extended eulogy, looks at Joan’s cruel zingers and how they were borne of the tough route she took to make it to the top. Chauvinistic Johnny Carson might be the reason we have spent 40-odd years arguing about whether women are funny or not. Carson hated female comics. But he loved Joan. He gave her the platform, made her a star, then pulled the fucking rug from under her. Those bitter, smart, sharp lines Rivers is now known for come from an earned resentment.

Nussbaum isn’t telling you that’s right, or wrong. She just likes to write. She likes to watch. She wants to understand.

I Like to Watch, by Emily Nussbaum (Random House USA, $50) is available at Unity Books.