High-profile and controversial figures often use PR consultancies and the media to help clean up their public perception. But as Pattrick Smellie of BusinessDesk reports, it can easily go the other way.

Every journalist loves an exclusive scoop.

So much so that last weekend, the country’s main rival news publishers, NZME and Stuff, both published “exclusive” interviews with one of New Zealand’s most shameless businesspeople, Eric Watson.

Of course, to be exclusive, there would need to have been just one interview. Otherwise, BusinessDesk would claim an exclusive every time we rang the same bank economist as other media for a word on that day’s latest housing unaffordability outrage.

There will be those who say that pointing this out is sour grapes. Guilty as charged.

But it’s also the second prime example in the past month of how people with high profiles and big problems seek to woo the media – a process that everyone knows goes on and that all journalists accept as inevitable and often fantastically useful, but which rarely gets an airing. 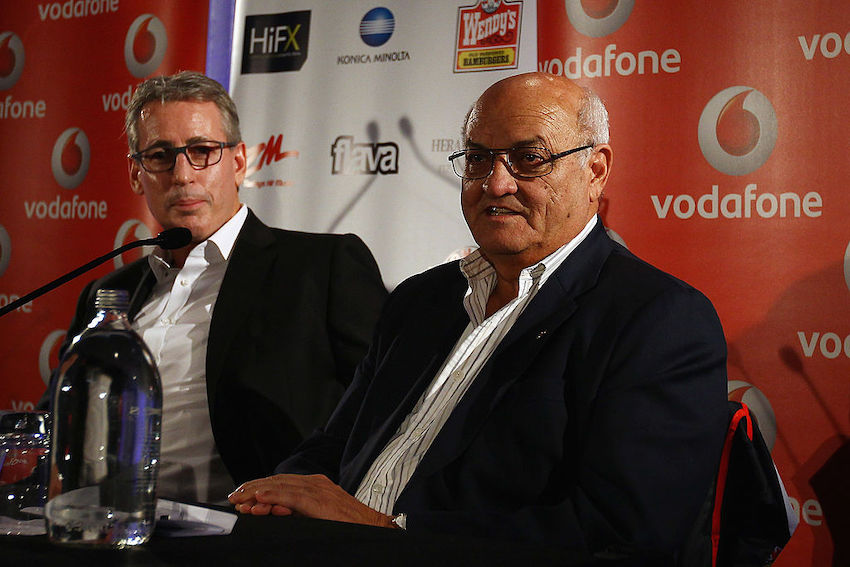 Eric Watson was found in contempt of court for withholding information about his assets from Owen Glenn, right (Photo: Hannah Peters/Getty Images)

The first I heard of the potential to interview Watson, at that time recently incarcerated in London’s Pentonville Prison for lying to a judge, was over a beer at a pub in Wellington with his recently appointed local PR agency.

It’s surprising that a self-proclaimed near-bankrupt who relies on cheques from his mum can afford PR advice in New Zealand and still enjoys a high-rolling lifestyle while owing the New Zealand tax department $112 million plus penalties, costs and accruing interest.

But that’s why an interview would be both interesting and undoubtedly well-read.

However, there were a number of issues to consider from Watson’s perspective. How big was our audience? Who else publishes our stuff? A little bit of dancing around who, exactly, from the team would do the interview.

At the same meeting, a couple of other juicy bones were thrown out too.

The Chow brothers, infamous for exploiting women in strip clubs and brothels in the early part of their journey to becoming would-be billionaire property developers, were also on the agency’s books.

The Chows, whose naked pursuit of respectability is admirably shameless, were preparing to launch a new property fund and would like to talk to me about it. They accepted their grubby past would come up, but they’ve accepted they can’t avoid their notoriety and spin a “bad-boys-made-good” narrative accordingly.

Watson and the Chows would both be great “gets”, as the saying goes for getting a scoop.

The Chow interview occurred, followed by an Auckland event heavily attended by National Party luminaries and addressed by the ANZ’s chair in New Zealand, John Key. There was a glaring lack of previously signalled detail about the new fund. The whole thing seemed all hat and no horse.

It would be fair to say the resulting story was not well-received by either the PR consultant most closely involved or the client, but a pretence continued that the Watson opportunity still existed.

After release from prison before Christmas, emails between us discussed whether Watson was still keen to talk and, to be fair, no promises were made. “Still waiting to hear back” was the last communication, on January 6.

It was a bit like dealings with another PR agency that was acting for the America’s Cup whistleblowers, who decided the Herald was the place to give an exclusive interview that ran December 1, having told me on November 26 that the guys were “laying low currently”.

It’s all part of the game.

So it was that, last weekend, both the Herald and Stuff published fairly similar interviews with Watson, creating some confusion for the very observant because one was said to be in London and the other in Ibiza, where Watson says he was whisked post-prison on a friend’s private jet.

Both interviews were conducted on Wednesday last week, giving both news outlets just enough time to digest, and the Herald to seek a second opinion on legal advice supplied by Watson. That opinion backed the former Bendon boss’s belief that he might succeed in suing Russell McVeagh over advice in the tax avoidance case that he roundly lost and is the cause of his huge unpaid New Zealand tax bill.

In both interviews, he not only candidly discussed his plans to write a book about his experiences and hawk the rights for a miniseries, but was also quite open about why he was changing the habits of a lifetime and talking to journalists.

“Unashamedly, you’re part of the marketing machine, my friend,” he told the Herald’s Matt Nippert, one of the country’s best investigative journalists who, by the way, thoroughly deserved to get the Watson interview, having followed his doings doggedly for years. As an insurrectionist mob was ranging around in the US Capitol building, Liddell was investing precious time on a hometown rehabilitation strategy.

Inevitably, that strategy involved “reaching out” to journalists via PR advisers to smooth the path.

There’s nothing wrong or even new about any of this process. Pick up any gossip magazine and you’ll read juicy revelations from “friends of the princess” or whoever. That is a euphemism for the princess’s, or whoever’s, publicity agent.

Perhaps what’s interesting is that in both the Chow and Liddell cases, the PR hand that fed the journalists was bitten. That is the risk the PR consultant always takes.

An uneasy tension is inevitable when a journo wants the hard interview and the PR department is seeking a soft focus piece “on the boss’s leadership style”.

I’ve done it myself. Employed by Baldwin Boyle Group in 2001 to arrange media exposure for the University of Auckland’s self-promotional Catching the Knowledge Wave conference, I spent weeks organising for a series of international speakers at the conference to be interviewed by Kim Hill.

They were all good talent and the process was transparent.

However, when the time came for an exchange with Lord Robert Winston – prominent at the time as a witty and avuncular TV science programme presenter – things went horribly, horribly wrong.

As soon as the interview was over, Lord Winston was on the phone to the vice-chancellor – the famously irascible John Hood – threatening not to come to the conference at all.

He did, thank goodness, but as the PR person who made it all happen, the lesson was that taking the blame was just part of the job description.

Pattrick Smellie worked in corporate public relations between 2001 and 2008 and as a Beehive press secretary from 1986 to 1988. This article has been amended to update the precise timing of the interviews with Eric Watson, following advice from his PR firm, and to remove a reference to a challenge to a social media post by Matthew Hooton.