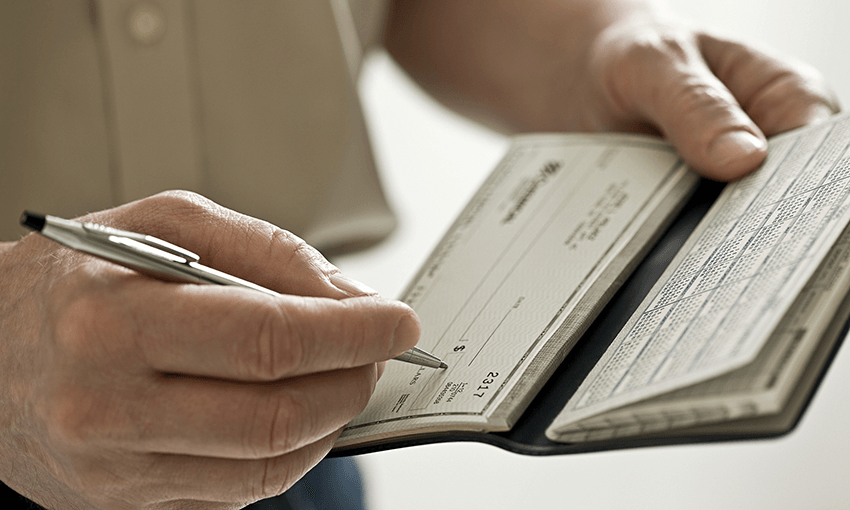 Kiwibank has announced it will stop accepting cheques this year. Photo: Getty Images

Farewell to cheques: How Kiwibank is helping customers into a new era

Kiwibank has announced it will stop accepting cheques this year. Photo: Getty Images

The idea of paying someone by signing a piece of paper may seem foreign to younger people, but less tech-savvy New Zealanders are having to adapt to a world without cheques.

When Kiwibank announced in May last year that it was going to do away with cheques from the end of this month, some of its customers asked, ‘what’s a cheque?’. This is how far we’ve come. A tried and true payment method that has served us well for hundreds of years is coming to the end of its days, with even the IRD and ACC giving notice that they will no longer accept cheques from March where there is another payment option available.

Kiwibank will be the first of our mainstream banks to go cheque-free. In this digital era cheques are labour-intensive and for customers, a slow means of transferring funds, while alternative payment options are safer, faster and cheaper. According to Brett Walters, Kiwibank’s head of working capital services, “Stopping our cheque service wasn’t an easy decision to make. However, for the last five years the use of cheques at Kiwibank has been declining at a rate of 20% year-on-year as customers choose less expensive ways to pay. In fact, more than 99% of our customers’ payments are via alternative methods.”

Cheque use has been steadily declining for many years. Payments NZ data shows in 2010 the average New Zealander made 18 payments by cheque, but by 2018 that figure had dropped to 3.8. Kiwibank customers are no exception, Walters says. In 2014 they deposited 2.75 million cheques, but last year they handled just 750,000, and since the bank announced the cheque’s imminent demise that number has dropped off even further. It is fair to say that today’s cheque users tend to be those who have not yet discovered the wonders of internet banking, and Kiwibank has been on a mission to educate less tech-savvy New Zealanders that the age of the electronic transaction is not so bad.

It has partnered with the Digital Inclusion Alliance in a programme called Stepping Up which offers community-based courses on everything from setting up email to how to use Google Drive. You don’t need to be a Kiwibank customer to join the free two-hour seminars.

In addition it is offering a programme of Tech Teas in its branches, “a place where customers can pop in, have a cup of tea, and we’ll walk through how to log on to and how to use internet banking”, Walters says. There is also DORA (Digital On-Road Access) a bus which tours the country delivering digital banking classes.

For those unable or unwilling to go online Kiwibank team members are offering alternatives, including telephone banking, direct debits and guidance on how to set up automatic payments.

The Tech Teas have been popular, with over 1,800 people attending so far and the bank’s ‘digital specialists’ providing all sorts of support. “There’s lots of lovely stories where people have walked into the branch, and once we’ve shown them how to do internet banking and they’ve got comfortable, and we’ve asked if we can help any further, we’ve set up things like Facebook for them and Skype so they can talk to the grandkids. One gentleman wanted us to set up SkyGo so he could watch Sky on his phone,” he says.

It’s a myth that people can’t adapt to technology, and it’s been satisfying for staff to open up the digital world for them. “They’ll sometimes come into the branch the next day and go ‘look, I logged on and made a payment myself.’ Many are uncertain because they’ve heard all the horror stories about hacking, phishing and passwords being stolen, but once they are taught a few basic rules of security they are fine,” Walters says.

Although digital alternatives offer a simple and easily adopted alternative in most cases, Kiwibank acknowledges that for some of its customers it may not really be an option. “We do understand that online banking isn’t for everyone,” Walters says, “so we also have alternative payment methods such as telephone banking, direct debits and automatic payments. These can be set up with the assistance of our team and can provide customers with an easy way to pay bills or make one-off payments. These methods are also proving popular for those on fixed incomes.”

Small businesses do still see a bit of cheque traffic, but most are happy that the end of the paper method is nigh because dealing with cheques takes up their time. Kiwibank has helped in the transition by setting its customers up in the public billing list so their trading partners are able to easily find them to make an electronic payment.

Candy Jay Ignacio, sales and marketing pfficer at medical equipment company Nitrogenx, says less than two percent of its customers still pay by cheque. “Even if it’s only one cheque we still have to go to the bank and line up to process it, and we have to post the invoice as well. So, this change is really helpful.

“We’re also trying to be paperless and we’re 90 percent there, so becoming cheque-free really helps in achieving that goal.”

One customer has pushed back on the change, so Nitrogenx sent a staff member down to show them how to do it. “They were not familiar with how PDFs work with invoices and internet banking, and it’s hard to just go over it on the phone, so we had to print out the debit forms for them and explain what’s going to happen. But everything went well.”

Paul Gibson, chief financial officer of cycle retailer Evo, says it’s been at least 18 months since the company saw a cheque, so when Kiwibank explained it was going cheque-free Evo was not concerned.

“If cheques are still around, usage is fewer and further between. And even then, my grandparents at 96 are both running cards these days – they don’t have a cheque book.”

This content was created in paid partnership with the Kiwibank. Learn more about our partnerships here.