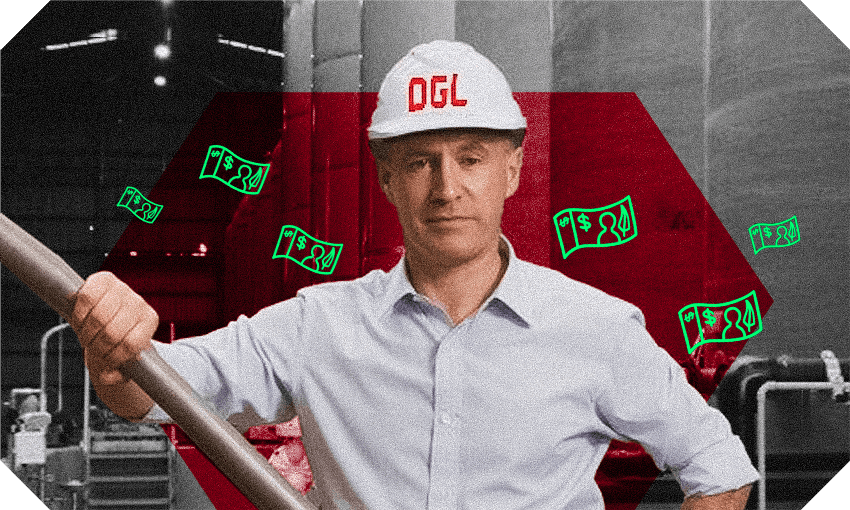 The ‘Eurasian fluff’ CEO has already lost $60m. Here’s how he might lose far more

No one had ever heard of boring chemical storage company DGL until this week. Now it’s dominating the news cycle – and could yet force CEO Simon Henry to fire himself.

The reaction to DGL CEO Simon Henry’s “Eurasian fluff” comments has been extraordinary. Since The Spinoff editor Madeleine Chapman drew broad attention to them with a surgical skewering on Wednesday, the condemnation has escalated into a roar, with the Shareholders’ Association, Kiwi Wealth and Lim’s My Food Bag co-founder Cecilia Robinson all condemning his appalling rhetoric. (Brian Gaynor’s giant Milford initially told the NBR it wouldn’t “sell and walk away” from its substantial DGL shareholding, before declining to comment to The Spinoff on whether or not it would sell.*)

Yesterday the scandalised response spread across the Tasman, with the Australian Financial Review, the country’s reliably conservative home for business reporting, noting acidly that “for a business focused on the manufacturing, trucking and warehousing of dangerous and reactive chemicals, who knew the most arresting of its sludge would come straight out of the CEO’s own mouth”.

The comments originated in an NBR story for The List, an editorial project which has replaced its longtime centrepiece the Rich List as a way of noting the material success of prominent people in business and wealth building. The very fact it chose to drop the “rich” from its name tells you something about the changing climate around business, though this seems to have evaded the notice of Henry, who spent almost the entire interview with Hamish McNicol clowning himself, including an excruciating passage where he calculates his fortune, based on DGL’s current share price.

In it McNicol notes that his net worth, which Henry calculates as being around $600m at the time of the interview, escalated to $700m within the eight days between the interview and his writing it up. This is because the vast majority of Henry’s wealth is tied up in his majority stake in DGL, his freight, warehousing and chemicals company.

Since publication of McNicol’s story, and Chapman’s withering satire of Henry’s comments, DGL’s share price has declined nearly 10%, representing a paper loss of over $60m for Henry. This can be attributed to a distaste for his views, and it’s plausible that selling based on a “I would rather light my money on fire than invest in DGL” will continue.

That might include you. The majority of those reading this are invested in sharemarkets one way or another, largely through Kiwisaver. Your balances will likely be a mix of stable returns like government bonds, some more broad-based products like index funds, which track closely with the overall market, and a smaller percentage directly invested in specific companies, like DGL. When a story echoes this loudly, it’s inevitable that hundreds if not thousands will ask their Kiwisaver provider or managed fund operator if they are invested in DGL, and want to get the hell out if they are.

This will drive an immediate reactive response, but there is a longer term and more profound danger in play. The immediate sell-off is a reflection of a moral abhorrence at his comments, and the fundamental character they reveal.

The deeply unpleasant thing is that this is not an isolated incident for Henry. Less than a year ago the NBR’s Tim Hunter published a sickening story regarding a long-term campaign of harassment toward a woman they identified as Jane. After a chance meeting in a hotel, he asked her manager for her email, and began a relentless conversation with her, in which she was an occasional and largely disinterested participant. After asking her to marry him and talking about a “random” encounter with a photograph of her mother – who does not share Jane’s name – she eventually asked him explicitly to stop contacting her. He responded by calling her “unwell”. Clearly shaken by the escalating pattern, she told Hunter “I felt disgusting. I felt dirty, I felt tainted.” When the content of the emails was put to Henry, he told Hunter he thought she was “a nutter”.

Between these two stories there appears to be ample evidence that Henry is not a fit and proper person to run a listed company. What DGL’s remaining shareholders need to do is ask themselves whether this will be over by the weekend, or whether Henry might represent a more fundamental barrier to DGL’s ability to do business.

Businesses mostly fall into one of two broad categories, known colloquially as B2B or B2C. B2C is the kind we tend to be familiar with – it stands for business-to-consumer, household brands who advertise in mainstream locations and attempt to project a particular image so that we might buy their products or services. B2B, though, is an enormous part of commerce, larger again than the consumer-facing sector. It stands for Business to Business – meaning that customers are other businesses, as opposed to retail shoppers.

A broad generalisation is that B2C businesses tend to have values more closely correlated with society at large – or at least publicly state them, and be more vulnerable to outcry when they fail to live up to those values. This is why we’ve seen pressure, ultimately successful, on Disney to take a stand on Florida’s “Don’t Say Gay” law, for example. B2B firms are less vulnerable to consumer and employee pressure, as they tend to have a much lower public profile. DGL is a classic of this type – a seemingly boring firm almost none of us would have heard of if its CEO wasn’t a ’70s relic.

That doesn’t mean B2B firms are invulnerable. Ultimately most B2B firms have a trail which leads to the broader population. This is partly through their own employees, who might leave if they get an offer from a business which seems less repulsive, especially in a tight labour market like the one we are now experiencing. But there is another channel, too.

Today, all over New Zealand and Australia, people working in distribution and procurement at those businesses will be waking up and viewing their relationship with DGL in a whole new light. They’ll be wondering about their own exposure to Henry’s company and views, and whether their business relationship might now be viewed as implicit endorsement of his explicitly racist and misogynist perspectives.

If they view Henry and DGL as irretrievably tarnished, then they will see if they can find other partners to take care of their dangerous chemical transportation and storage needs. If competition regulators in Australia and New Zealand have been doing their jobs, there will be a replacement on function, if not necessarily on price. But the businesses might figure that a little extra cost, even in an inflationary environment, is worth the ability to publicly say they have cut ties with this business.

In a normal listed company, with a fully diversified shareholder book, Henry’s comments would have been cause for instant dismissal. DGL is not a normal company, and Henry personally owns over half the shares, giving him total control over hiring and firing.

Thus the only way he will be made to suffer real consequences for his speech will be if it has a real impact on his business, as transmitted through his staff and customers. His silence since the interview can be read as a bet that he and DGL can ride this one out. In the coming days and weeks his business customers will decide whether that is a tenable course of action. Or whether the best way he can protect his own wealth is to properly discipline his CEO – that is, to sack himself.

* This story was amended at 1.45pm on May 6 after Milford denied it was publicly standing by its DGL shareholding. “We condemn all discriminatory and offensive comments,” said head of sustainable investments Frances Sweetman in a statement. “Our sustainability process is to directly engage with a company to tackle these issues head on. This is not easy, but we genuinely believe this is the best way to effect change. We are going to engage with the CEO and board of DGL Group in relation to these comments.”