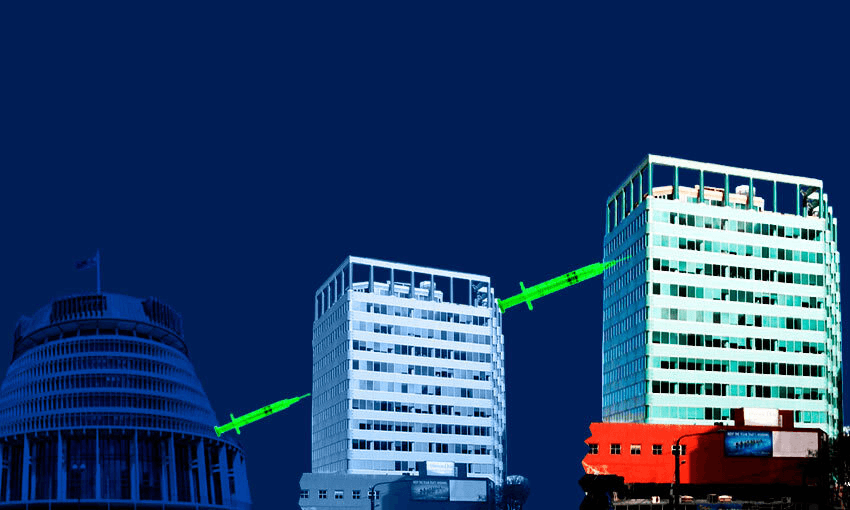 Many businesses only want vaccinated staff and customers. Will government let them make the big exclusion?

The government appears wholly unmoved by business leaders’ pleas for widespread vaccination mandates for both workers and customers. Where’s the nanny state when you need it, they ask Bernard Hickey.

The emergence of delta, the end of herd immunity, the need for extremely high vaccination rates to avoid overwhelming our hospitals, and the demise of the elimination strategy all mean there is nowhere to hide in our fight to get Covid-19 under control. As a result, policy deemed unthinkable last year should not just be thought about, but implemented urgently. The Overton window – the range of policy positions deemed acceptable by the political mainstream at any given time – is widening rapidly.

Chief among these previously unthinkable ideas are vaccination certificates (just don’t call them passports) and vaccination mandates. Most people knew they might be needed if Aotearoa ever lost the elimination battle and had to learn to live with Covid endemic in the community. But the government is now well behind the business community, which this week amplified its calls for mandates and widespread use of vaccination certificates.

BusinessNZ, the Employers and Manufacturers Association (EMA) Northern, the Auckland Chamber of Commerce and the Aged Care Association have all called for mandatory vaccination and the use of vaccination certificates for both employees and customers, where needed. They are also champing at the bit to start using rapid antigen testing kits to test staff and customers on the spot.

The frustration is now palpable.

“The government has made it very clear [vaccine mandates are] a step too far under various legislated rights for our citizens, but it has also failed to step up with any direction or guidance for businesses trying to manage and create vaccination policies in the workplace,” EMA Northern CEO Brett O’Riley said on Wednesday.

“The current risk-based approach recommended by the minister and MBIE is a recipe for court cases, costs and delays while jurisprudence is sorted. The last thing businesses need now is more uncertainty,” he said.

“What we need is for the government to remove all ambiguity, or the health order needs to be extended to give direction for employers. Not just for Auckland – for the whole of New Zealand,” Barnett said.

The NZ Herald’s Mood of the Boardroom survey of CEOs found 74% planned to require their staff to be vaccinated and a majority wanted it made mandatory, or at least for the use of certificates to be mandatory.

‘We don’t want the choice’

Even the hospitality industry, which had been reluctant on mandatory vaccination until recently, is coming on board.

“Whatever system the government designs, it needs to be easy for staff to understand and easy for customers to understand, because conflict happens between those groups of people if the rules aren’t clear,” CEO Jamie Williams told Stuff. Francois Febvre, another owner of multiple Wellington cafes, also told Stuff he wanted clarity. “I don’t think the government should leave us with the choice about this. It’s not our choice,” Febvre said.

I asked prime minister Jacinda Ardern about this issue twice this week, citing the calls from business for mandatory vaccination, particularly in healthcare, education and other higher risk workplaces.

On Tuesday she was announcing details of vaccine certificates due to come into effect in November. The government planned to make them mandatory for the summer’s music festivals – potential super spreader events.

Cabinet is expected to decide to make vaccination mandatory for teachers at its meeting next Monday, and healthcare is seen as the next obvious cab off the rank. But Ardern remains reluctant to introduce widespread mandates.

She said the government is “looking at circumstances where we may not mandate their use, but an organiser who might sit outside of that mandate may wish to be able to use them. So we’re looking at how we can create a legal framework so if people want to use them for their purposes they’re able to,” she said.

She added: “We are out talking to the industry to ask them: is this something that you would find useful as a tool to keep your workforce safe and also to ensure greater continuity that you can stay open?”

Ardern did however rule out making certificates mandatory in essential-service areas such as pharmacies and grocery stores. Privately run facilities such as churches and sports clubs were also likely to be exempted.

“This is an area where we’re going to be very cautious and also learn from overseas,” she said.

The irony is that governments overseas held off using mandates until in the midst of second or third waves of infections, but they ultimately proved much more effective and less controversial than many politicians feared. Mandates by the likes of US airlines and US federal employers have led to much higher vaccination rates and very few resignations.

As Financial Times commentator Janan Ganesh wrote this week, “after five years of anti-elite politics, from Brazil to the Philippines, it feels transgressive to express this thought: in the end, people want to be led.”

‘I prefer advice to orders’

I challenged the PM on why the government was not treating mandatory vaccines with more urgency. Why is it still in the consultation phase many months after first becoming aware mandates would be at least a possibility?

She said the government preferred to give employers advice about using the existing employment, human rights and health and safety laws to thread the needle legally. Many in business have argued this means they have to wait for the courts to set guidelines, expensively and slowly, via case law.

“We have provided employers guidance on how they can go about undertaking essential workplace health and safety assessments to determine whether or not that is something they require within their own workplace,” Ardern said, denying that the government was simply leaving directors at the mercy of the courts.

“We are not in the position of mandating that every single New Zealander be vaccinated. That has never been our approach in this country on vaccines,” she said.

Business NZ CEO Kirk Hope, who has worked closely with the government to represent employers’ interests throughout the pandemic, is one of the business leaders who would like to see vaccines be made mandatory, albeit without discrimination against those unable to take the vaccine.

But he also understands the fine line the government must walk: protecting public health without worsening inequality and further alienating those communities already least likely to trust the government.

“We’ve got parts of our population, already vulnerable communities, where you probably don’t want to increase inequity,” Hope said.

“With my business hat on, I’ve been upfront saying the government should mandate vaccinations, but I also acknowledge you don’t want to create a situation in those vulnerable communities where those people are further marginalised.